Working together for the life of the planet

Missionaries working among indigenous peoples in Brazil gather to pledge support for indigenous movements for the care of all creation.

In 1972, the National Conference of Brazilian Bishops founded CIMI, the Missionary Indigenous Council. CIMI includes all Catholic missionaries working among the indigenous and is divided into 11 regions throughout Brazil. At the time, missionaries working among indigenou s peoples in Brazil were appalled at situations of genocide perpetrated by the military dictatorship and by the government's explicit pol icy of total integration of indigenous peoples into Brazilian national society. CIMI accompanies native peoples in their village meetings and assemblies, helping them create strategies to demand their rights (land, health, education, language, and culture) so as to ensure the survival of the rich cultural diversity of Brazil's 180 indigenous groups. At a national assembly in 1995, CIMI members defined the organization's objective: 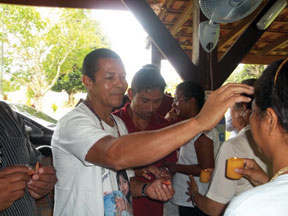 Indigenous leaders anoint missioners with paint from the Uruca plant. All photos credited to Hoadson.

"Animated by our faith in the Gospel of life, justice, and solidarity, and in the face of aggressions arising from the neoliberal model, we have decided to intensify our presence and support among indigenous com-munities, peoples and organizations, and intervene in Brazilian society as allies of the indigenous peoples, strengthening the process of autonomy of these peoples in the building of an alternative, multiethnic, popu-lar and democratic project."

As a member of CIMI, I serve as linguistic resource person in Amazonas and Roraima states. I accompany communities that wish to revitalize their languages, helping them to construct language learning models. Over the years, the term used in Brazil has changed from tribus (tribes) to povos indigenas (indigenous peoples), but has not yet arrived at Primeiras Nagoes (First Nations)— reflecting, perhaps, society's fear of indigenous autonomy.

This February, I attended the annual regional CIMI assembly on the theme, The Contribution of Indigenous Peoples in the Preservation of the Environment in the Context of Global Warming. We listened to two indigenous leaders, Marcos Apurina and Sonia Guajajara of COIAB (Coordination of Indigenous Organizations in Amazonian Brazil). They voiced their concerns about deforestation and informed us of a recent document asking the government to reduce deforestation in the Amazonian region, principally in areas where the government's Accelerated Growth Projects are operating. Brazil's new President, Dilma, has promised to address indigenous concerns, particularly the construction of the Belo Monte hydro project on the Xingu River in Para state, slated to become the world's third largest dam. It entails the flooding of a huge tract of jungle (516 square kilometres) and the forced relocation of indigenous groups. 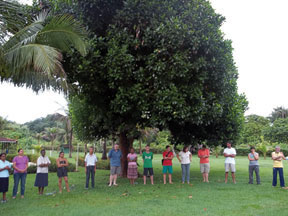 At the 2011 regional assembly of CIMI, the Missionary Council founded by the Brazilian Bishops, participants say a prayer for nature. CIMI includes all Catholic missionaries working among the Indigenous in 11 regions throughout Brazil.

Addressing the issue of global warming, Professor Paulo Graca of the National Institute of Research on the Amazon (INPA) said that by 2090 temperatures on the planet will rise from 1.8 to 4.0°C, and the rain cycle in the Amazon jungle will be adversely affected. 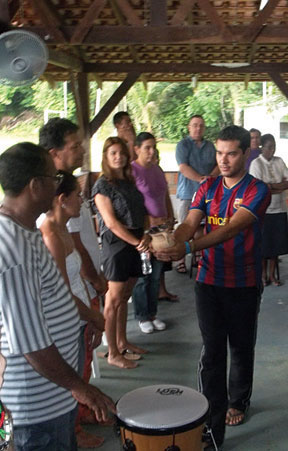 The Assembly reflected on indigenous peoples' role in preserving the environment: their respect for nature, taking from the earth what is needed for survival and not selling products (fish, fruits) large-scale for profit. This is an alternative system to that of the current capitalist system of accumulation. Indigenous who move to cities often fall into the culture of accumulation and individualism. Products of industrial society new to indigenous culture, such as pop cans and paper wrappers, now litter villages and rivers. The future will involve a struggle between the traditional way of life with its balanced inter-relationship with the environment, and the confrontation with industrial society, focused on exploiting nature for profit.

The CIMI assembly ended by defining two objectives for 2011-2012: as missionaries, we will support and strengthen the organizations of the indigenous movement, and we will focus on land and environmental issues. We will work in conjunction with the national Lenten campaign, with its theme "Fraternity and the Life of the Planet". We will become more sensitive to the cry of our home planet, as voiced by St. Paul: "...the whole creation has been groaning as in the pains of childbirth..." (Romans 8:22). Join us in prayer and action to protect our planet Earth.