Pope John Paul II has said that the Catholic Church’s commitment to interreligious dialogue has now become irreversible; a statement repeated by his successor, Pope Benedict XVI. Such firm acceptance reminds us that dialogue with other religions is not simply left to a choice we arbitrarily make, but has become a responsibility we must necessarily assume, today and in the days to come. Nostra Aetate (Declaration on the Relationship of the Church to Non-Christian Religions) is the Magna Carta document that has spawned and further opened the way to the richness of interreligious dialogue. One must give enormous credit to the Fathers of the Second Vatican Council for the crafting of this single document.

In Nostra Aetate the Roman Catholic Church reflects on its relationship with other world religions and, for the first time in the Church’s history, formally gives legitimacy and recognition to the place of other world religions. This proved to be a remarkable turn of events for the Church in the modern world. At certain points throughout its history the Church tolerated and sometimes rejected religions as being devoid of any significant value and certainly of divine truth. At the same time, it should be mentioned that “the early tradition shows a remarkable openness. A number of Church Fathers...in particular, writers of the second century and the first part of the third century such as Justin, Iranaeus and Clement of Alexandria either explicitly or in an equivalent way, speak about the “seeds” sown by the Word of God in the nations.” (Dialogue and Proclamation, #24) 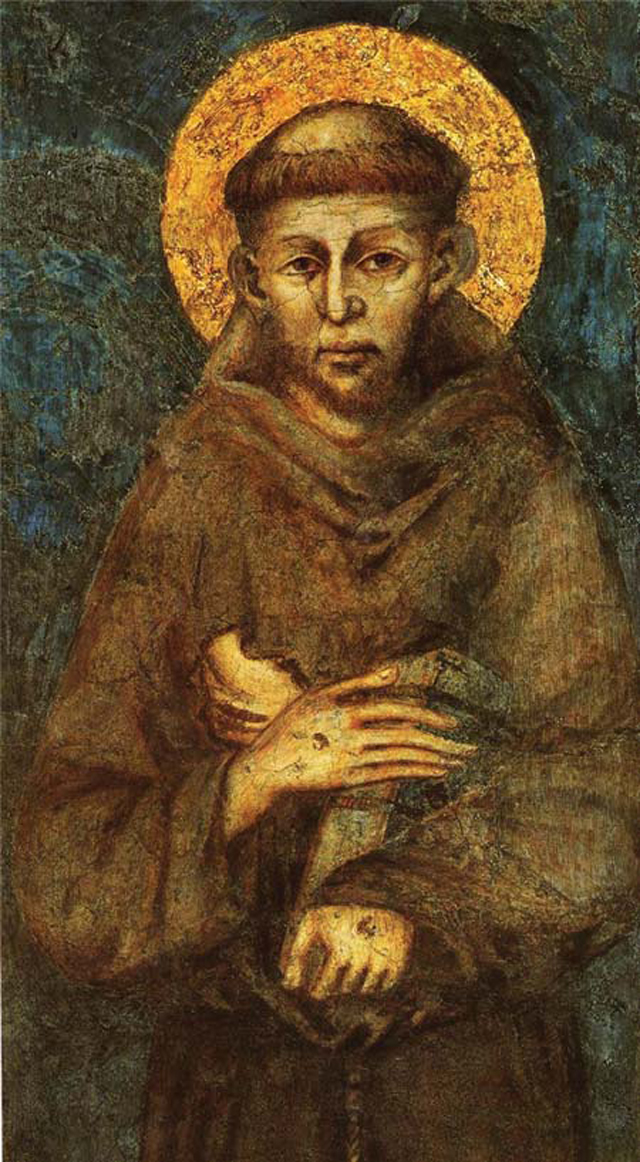 Francis of Assisi may have initiated he first ever Christian-Muslim dialogue when he met with Sultan Malik-al-kalim of Egypt during the fifth Christian crusade.

By the year 675 AD, John of Damascus was among the first to provide a scathing criticism of the religion of Islam, pointing out numerous errors and heretical points of view contained in the Qu’ran. This is accounted for in his monumental work, generally referred to as Heresies. The work of John of Damascus greatly influenced the thinking and subsequent teaching of the Church throughout the centuries.

One can only wonder if St. Francis of Assisi read the works of the Damascene since, without espousing the Muslim faith, Francis seemed to have a certain measure of respect for the religion. Following his sense that all God’s people are brothers and sisters, Francis crossed enemy lines in 1219 during the fifth Christian crusade to meet the Sultan Malik-al-kalim of Egypt. His initial intention was to convert the sultan to Christianity, even at the risk of becoming a martyr. Though unsuccessful, it is generally accepted that his encounter was cordial, and after making an appeal for peace Francis was escorted back to safety by Muslim protection.

Some refer to this encounter between the saint and the sultan as the first ever Christian-Muslim dia-logue. The controversial gesture of Pope John Paul II kissing the Qu’ran on his 2001 visit to Damascus, Syria, indicates how far we have come. The connection between Francis and Islam makes Assisi, the birth place of Francis, the preferred location for the past several meetings of world religious leaders, called first by Pope John Paul II and in more recent times by Pope Benedict XVI.

As Nostra Aetate confirms, the history between Christians and Muslims has been marked by conflict: “the sacred Council now pleads with all to forget the past, and urges that a sincere effort be made to achieve mutual understanding; for the benefit of all men, let them together preserve and promote peace, liberty, social justice and moral values.” (#3) A mutual response to such a call seems challenging; however we live in hope.

Communication, travel and immigration within the past 50 years have provided for a more global consciousness and have brought the presence of other religions to the forefront of modern thinking. Fifty years ago it was less likely that one’s neighbour would be a Muslim, Buddhist, or Hindu. Communication between people of different faith traditions was quite muted as compared to the experience of many today.

Nostra Aetate, this watershed document, has changed the world and in particular the Catholic world. While the document gives a special place of priority to the Jews and mentions its awareness of other religions, it specifically speaks of Hindus, Buddhists and Muslims. For the first time in history the Church stated that she “rejects nothing that is true and holy in these religions...”

Nostra Aetate, this watershed document, has changed the world and in particular the Catholic world. While the document gives a special place of priority to the Jews and mentions its awareness of other religions, it specifically speaks of Hindus, Buddhists and Muslims. For the first time in history the Church stated that she “rejects nothing that is true and holy in these religions. She regards with sincere reverence those ways of conduct and of life, those precepts and teachings which, though differing in many aspects from the ones she holds and sets forth, nonetheless often reflect a ray of that Truth which enlightens all men.” (#2) Making this groundbreaking statement without compromise, the document goes on to assure us that “indeed she proclaims and ever must proclaim Christ ‘the way, the truth and the life’ (John 14:6) in whom man may find the fullness of religious life, in whom God has reconciled all things to himself.” (#2) 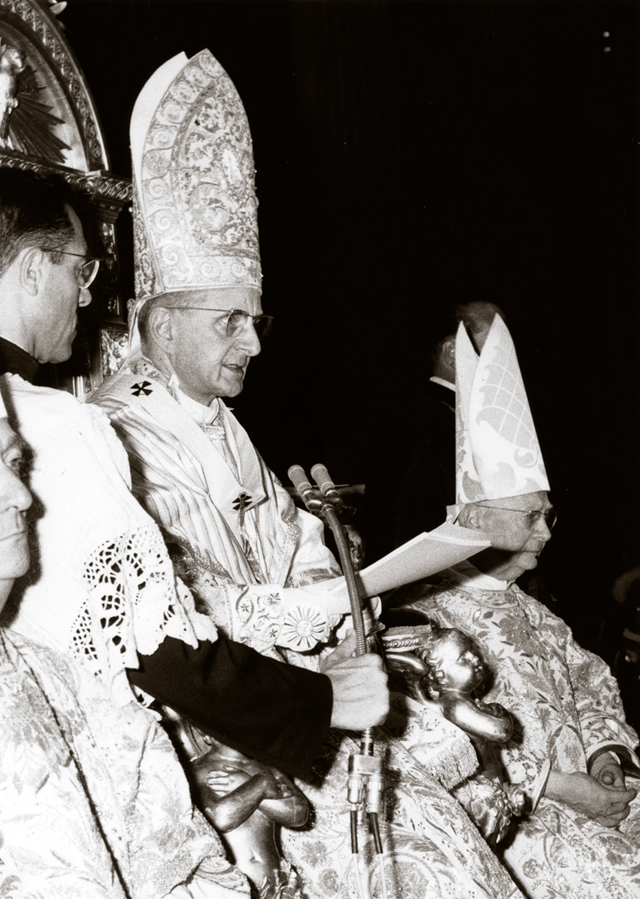 (Credit: Photo Service – L’Osservatore Romano)
The term “dialogue” was formerly made known to the Church by Pope Paul VI in the encyclical Ecclesiam Suam (1964), and on October 28, 1965, Pope Paul formally issued Nostra Aetate (Latin: In our Age), the Declaration on the Relation of the Church with Non-Christian Religions.

The term “dialogue” was formerly made known to the Church by Pope Paul VI in the encyclical Ecclesiam Suam (1964). Dialogue means not simply discussion, but includes all positive and constructive interreligious relations with individuals and faith communities which are directed at mutual cooperation, understanding and enrichment.

Nostra Aetate has also been the primary influence for the publication of two particularly important documents: Dialogue and Mission (1984) and Dialogue and Proclamation (1991). Both are essential reading for Catholics and partners engaged in interreligious relationships. Numerous other documents reflect the new and developing interest on the part of the Church for interreligious dialogue, to name but a few: Dogmatic Constitution on the Church (1964), Decree on the Church’s Missionary Activity (1965), and Declaration on Religious Liberty (1965). So important is this dialogue and upbuilding of interreligious relationships that Paul VI set up the Secretariat (Office) for Non-Christians in 1964 and later gave it higher profile by renaming it the Pontifical Council for Interreligious Dialogue in 1988. This office sets the tone, direction and boundaries for Roman Catholic participation in interreligious dialogue.

Further significance is given to the document, Nostra Aetate, when we pause and give wider consideration to what the state of the world might be like if interreligious dialogue did not exist throughout the past 50 years. Today many have come to believe that there can be no peace in the world unless there is peace among religions. The spirit of this belief is clearly manifest in the historic 2007 statement, A Common Word Between Us and You, issued by 138 high level Muslim scholars and clerics and addressed to Pope Benedict XVI and other Christian leaders throughout the world. With more than half the world’s population consisting of Muslims and Christians, the authors of the letter believe that meaningful world peace can only come from peace and justice between both faiths. 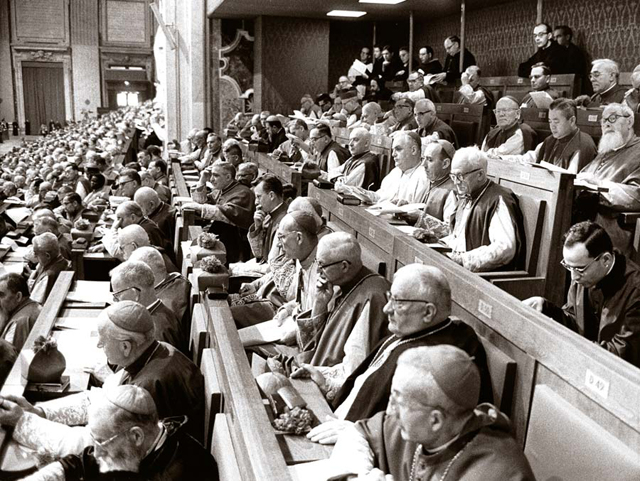 (Credit: Photo Service – L’Osservatore Romano)
Nostra Aetate (Declaration on the Relationship of the Church to Non-Christian Religions), passed by a vote of 2,221 to 88 of the assembled bishops at Vatican II.

The growing presence of the Muslim population in Canada, for example, makes dialogue essential if good relationships are to grow and prosper. The first mosque in Canada was built in the city of Edmonton in 1938, at which time there were an estimated 700 Muslims in Canada. Today there are more than 200 mosques across the country and a Muslim population approaching one million and continuing to increase. The majority of Muslims in Canada are immigrants from various Muslim countries who come in search of an improved quality of life, especially for their children and family members.

Going forward, Nostra Aetate will remain the touchstone document legitimizing future involvement of Roman Catholics in interreligious engagement. Since its publication, the track record of the Roman Catholic Church’s involvement in interfaith dialogue has been one of a moderate success story. In order to further its success, clergy, religious and laity must do their part in promoting a good neighbour policy with their interfaith relationships at home, in the work place and in the many other opportunities that exist. Much has been accomplished and much more needs to be done.

Rev. Damian MacPherson, S.A., a Franciscan Friar of the Atonement, has been Director for Ecumenical and Interfaith Affairs at the Archdiocese of Toronto for the past 12 years.