Reflections of a Council Father

The Second Vatican Council (1962-65) was the most intense and meaningful period of education in my entire life. Fifty years later, I welcome this opportunity to share some of my experiences.

More than 2,500 bishops from around the world participated, with hundreds of scholars from various disciplines, plus a substantial number of observers from the main world religions.

Each day began with the celebration of the Eucharist in a different Rite. Then came the solemn enthrone-ment of the Gospels: a constant reminder that spiritual authority comes ultimately from Jesus Christ who in his own Person is the fullness of Revelation.

The vision of Blessed John XXIII served as our guide. In his opening address he made it clear that pastoral church life (orthopraxis), embraces more than the teachings encompassed by dogma (orthodoxy). We required no Council to teach anew what was already accepted by all. We needed to revisit our traditions, adapt as required and allow for salutary development. 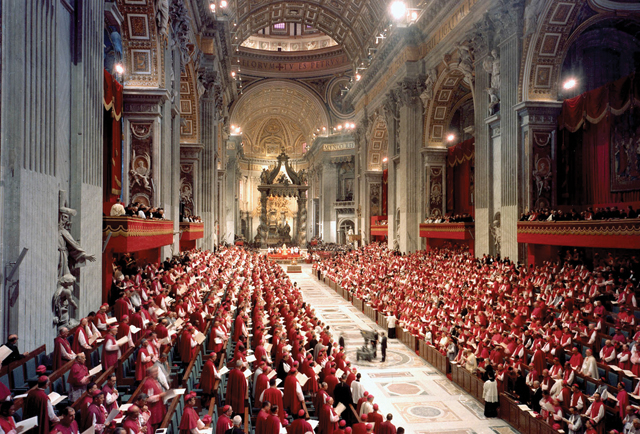 CREDIT: (CNS photo from Catholic Press Photo)
Bishops fill St. Peter’s Basilica as Pope Paul VI presides over a meeting of the Second Vatican Council. Sessions were held in the later months of 1962, 1963, 1964 and 1965. Pope John XXIII opened the council in 1962, stating that the goal of the council was to eradicate seeds of discord and to promote peace and unity among humankind. The remaining three sessions were led by Pope Paul following the death of Pope John in June 1963.

I am firmly convinced that Vatican II will be recorded in history as one of the most influential of all times. One short article cannot possibly do justice to this vast enterprise. My intent is simply to draw attention to a few points that I believe are particularly significant.

We sought a renewed and loving relationship with all other believers and with the modern world. This engagement required more than clear thinking and teaching. Not only our heads, but also our hearts and our hands are required, reaching out to all people of good will in a common search for justice and peace. Jesus described himself not only as the Truth, but equally the Way and the Life (John 14:6). In the Council’s footsteps, the 1971 Synod of Bishops later declared that action on behalf of justice is an indispensable dimension of the proclamation of the Gospel today.

Vatican II awakened all of us to the global dimensions of our faith, to its full catholicity. I read somewhere that not only does the Church have a mission, but that the Mission also has a church. We became more conscious of our international responsibilities. All baptized believers are called to be missionaries, proclaiming the Good News by their very lives, in whatever sphere they are engaged, whether in community life or in their individual pursuits.

Through faith and baptism the Holy Spirit calls us to discipleship with and in Christ, graced with the spiritual energy to serve humankind. The Pastoral Constitution on the Church in the Modern World teaches us that we are to carry in our hearts the joys and hopes as well as the afflictions of humanity (#1). It pre-sents us with the figure of Jesus who in his human condition is also our Model, Mentor and Guide (#22).

We are urged to nourish our hearts and our spirits with the Sacred Scriptures, recognized and lived henceforth as the very “soul” of our beliefs and practices, of our theology and spirituality.

In the practical domain we are invited to face human problems with an ethic of co-responsibility rather than a morality of prescriptions. We can find in our hearts what our informed conscience tells us is right and just. The freedom of this conscience is to be respected by everyone as the private domain where God alone is our Master.

We sought a renewed and loving relationship with all other believers and with the modern world.

The Sacred Liturgy is now presented to every believer as the very Work of Christ, in which we are honored and expected to participate, knowingly, actively and fruitfully. Would that all parish leaders, the pastors particularly, might take to heart their task of facilitating this personal and community involvement by all who frequent our churches. Would that they might all give priority to the prayer time and the preparations required to preach homilies inspired by the Word of God, which truly nourish hearers with the Bread of Life. Attendance at church would no longer be considered “boring” if worshippers felt called personally to share with Christ in the work of saving the world.

At the heart of our liturgy lies the Eucharist, which the Council re-affirmed as the source and summit of all spiritual life. We are called to find in this Blessed Sacrament much more than personal or private nurtur-ing and growth in sanctity. The original meaning of the word “eucharist” is understood more adequately when we consider its roots, found in the act of thanksgiving and the washing of the feet. The sacred Bread and the Cup of salvation are indeed venerable and deserving of our worship, but they also remind us that eucharist is a verb even more than a noun. It calls for action as well as contemplation. Jesus offered us his body “broken”, “given”, to be shared with others whatever it might cost us.

The Council further developed our focus on the Reign of God. Our Church is not an end in itself, however vital its role. Much more needs to be done to engage all believers in the transformation of society through the saving energy of Gospel values. A holistic approach is required.

Vatican II also reminded us that we need to embrace more effectively the cause of the poor, recognizing that salvation history is being written by the persecuted, not the victors. Our Saviour identified with the rejects of this world, Himself humbled unto death before rising victorious and imparting the Holy Spirit.

We are not called to compete with any other religion or faith. Since the Council, we are urged to col-laborate and to emulate one another in the struggle to promote justice with compassion and peace. Our preaching of the Gospel will be truly efficacious in as much as it engages people in the Paschal Mystery: life arising, from and through death to self, in the power and the Spirit of the Risen Lord. As the Council declared, the future belongs to those who can provide the rising generations with reasons to live and to hope.