The role of women religious

Fifty years ago, on October 11, 1962, Pope John XXIII formally opened the second Vatican Council. Catholics who experienced Vatican II were profoundly moved by changes to their understanding of church and its mission in the world. The Council was for them a formative experience, one that is difficult to communicate to younger Catholics. All Catholics were invited by their bishops to receive the teachings of the Council, and women religious received the teachings with enthusiasm.

I was one of those women religious for whom Vatican II was a formative experience. In 1969-70, I spent a year of theological study at Manhattan College with women and men from many religious congregations and different ecclesiologies. That year began the transformation of Sister Loyola into Professor Ellen Leonard, CSJ. I gladly returned to my baptismal name and entered enthusiastically into the renewal process. For me, Vatican II was truly transformative. 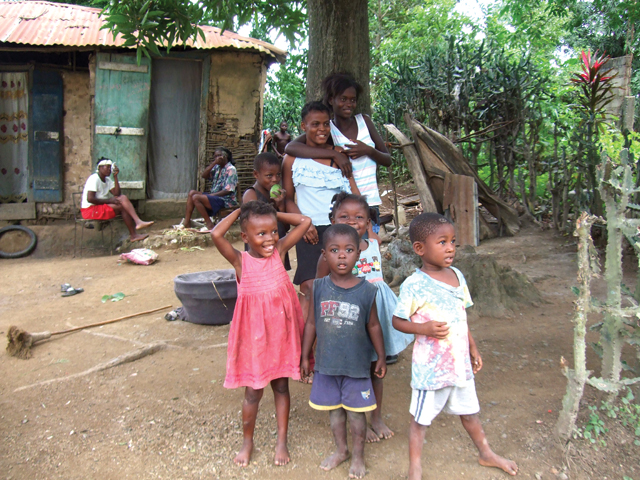 (Credit: Kate O’Donnell, Scarboro Missions)
A gathering of neighbours. Haiti. Three Sisters of St. Joseph of Toronto (Sr. Mary Alban Bouchard, Sr. Lorraine Malo, and Sr. Rosemary Fry) are currently working with the people of Haiti, a country identified as the poorest in the western hemisphere.

The task of renewal had already begun among women religious before Vatican II, however, the event of the Council offered new motivation. In some ways the Council provided a new vision. A study of the 16 docu-ments, worked out over the four-year period from 1962 to 1965, reveals dramatic changes in worldview. We were instructed to discern the signs of the times: “the Church has always had the duty of scrutinizing the signs of the times and of interpreting them in the light of the Gospel.” (Gaudium et Spes, The Church in the Modern World, #165). One of the most significant teachings of the Council was its emphasis on the universal call to holiness. Baptism was recognized as the common sacrament.

To cope with the teachings of Vatican II, religious congregations were required to have special chapters (meetings) of renewal. The Decree on the Adaptation and Renewal of Religious Life (Perfectae Caritatis) offered specific instructions. We were to return to the sources of our lives, the Gospels and our founding stories, and as we did so, to consider the signs of our own times. Efforts to “faithfully acknowledge and maintain the spirit and aims of each founder” on occasion revealed surprises as sisters explored their “institute’s heritage.” Study of the monastic lifestyle of contemporary women religious led to critique and the search for more authentic apostolic response.

Struggles accompanied these changes. Not all sisters were comfortable with a different vision of their vocation. Some few who interpreted religious life as a superior way to live the Gospel chose to leave their religious congregations in search of a more monastic model. The Council’s affirmation of the baptismal call to holiness caused others to reconsider a vocation to marriage and children. Others found the pace of change in religious life and in the Church too slow. But a substantial number embraced the challenges of living as women religious in the post Vatican II church. For the generation that came of age during Vatican II, life would never be the same. As the sisters sought to discern “the signs of the times” their awareness of the world broadened. One expression of this change in consciousness was found in overseas missions and commitment to the liberation of the poor and oppressed. A number of congregations sent groups to learn the language and culture of a foreign country and to open up missions, often in cooperation with others.

That year began the transformation of Sister Loyola into Professor Ellen Leonard, CSJ. I gladly returned to my baptismal name and entered enthusiastically into the renewal process. For me, Vatican II was truly transformative.

Vatican II also opened the church to think ecumenically. Protestant observers participated in some of the sessions of the Council and a number of national and international dialogues were set up. Perhaps the informal dialogues among neighbours may have been more effective than the official dialogues. Certainly a new spirit breathed through the Church, and many sisters made a commitment to dialogue and to interfaith efforts for social justice.

Another “sign of the times” has been the rise and growth of feminist consciousness and feminist move-ments, a global reality that reflected in efforts like the UN declaration of the International Year of Women (1975) and the Decade for Women (1976-1985) Roman Catholic women along with women of other communities were becoming more aware of gender and the patriarchal nature of church teaching. Feminism and feminist theologies also contributed to renewal for women religious.

Many sisters began to study theology. Taking to heart the directive of Perfectae Caritatis for the renewal of religious life and “adaptation to the changed conditions of our time,” sisters signed up for courses in scripture, church history, systematic theology (the study of topics like the person of Christ and the nature of the church), and pastoral studies. Seminaries that had been built and maintained for the education of male seminarians opened their doors to lay women and men. The result was a shift in the population of students in theological study. The change in the composition of the student body had profound effects as new questions came to light.

I was fortunate enough to be among those students, and to find my vocation as a systematic theologian, studying and contributing to feminist and liberation theology, along with other Canadian women religious and laywomen. In the wake of Vatican II, women religious have played an important role in the transformation of theology and the global church.

Sister Ellen Leonard is a Sister of St. Joseph of Toronto, and a Professor Emerita at St. Michael’s Faculty of Theology and the Toronto School of Theology (TST) where she taught for many years.

The quotations in this article are from Vatican Council II, Constitutions, Decrees, and Declarations, edited by Dominican Father Austin Flannery, O.P. This book provides a revised translation of the documents in inclusive language