The following are excerpts from the reflections of students from St. Mary Catholic Secondary School (Hamilton, Ontario) on their experience volunteering in San José de Ocoa, Dominican Republic, in the 2012-13 school year. Through the Dominican Republic Education and Medical Support Program (D.R.E.A.M.S.), the students worked with the local community development organization, ADESJO, to assist with projects to better the lives of the people. Founded by Scarboro missionaries in 1962, ADESJO’s vision of holistic development includes providing the people of Ocoa with the possibility of a dignified life. Through participation, organization, technical support, planning tools, project proposal workshops and training, ADESJO strives to make each community self-sustainable and the master of its own destiny. Community participation is at the heart of ADESJO’s work. Each project, whether it be planting crops or building a house, is carried out by committees of neighbours working alongside each other in traditional Dominican solidarity.

The D.R.E.A.M.S. program is helping to make tomorrow’s leaders. A big thank you to the students, volunteers, organizers, and chaperones for making this happen! 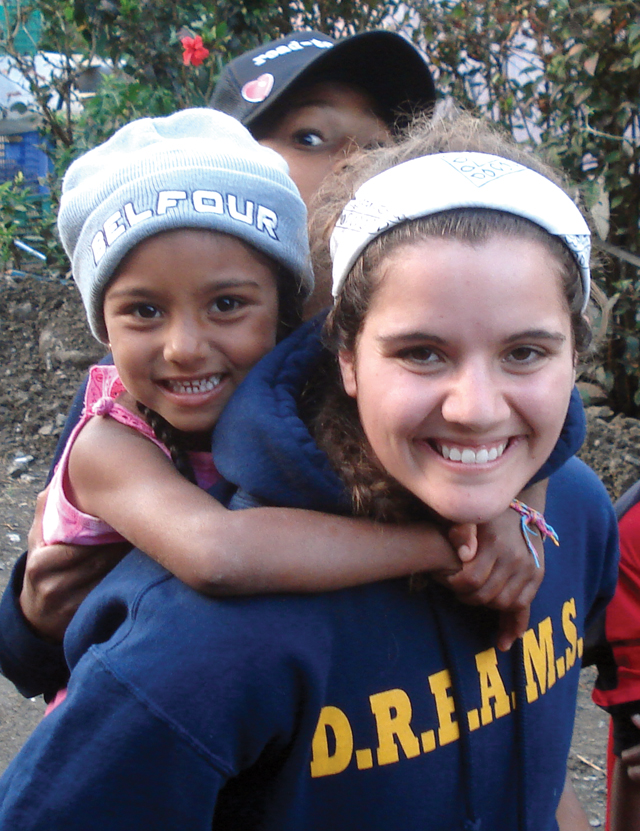 There is a reason why Jesus in Matthew’s Gospel lists one of the beatitudes as “blessed are the poor...” I sincerely hope that every single person will strive to have the heart of Anibal, the patience of Miguelito, the endearing soul of Santa, the humour of Argenis, the dance moves of Julio, the selflessness of Mr. Rodriguez, the speed of Niño, the joy of Sonia, the fortitude of John, the wit of Wili, the purity of Carolina, the thankfulness of Elena, the protection of Neagro, the intelligence of Wilkie, and the bountiful sense of community and love of every single member of El Puente de la Horma and beyond...

D.R.E.A.M.S. is an incredible experience that opens your eyes to both the poverty and potential of the world and that for one week you were privy to that life.
Sarah Ippolito 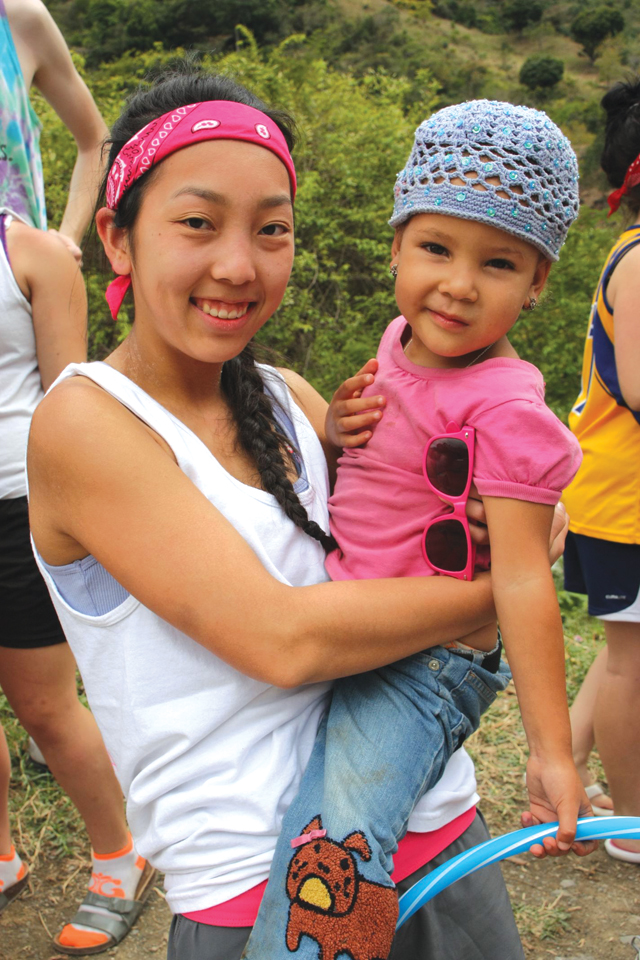 One of the things that I loved most about the Dominicans was their sense of community. While we were on the worksite, everyone from the community was helping and happy to do so... The way that they all come together and support one another in achieving a common goal is inspiring. Their unity is definitely something that I took away from this experience.
Alexis Chang 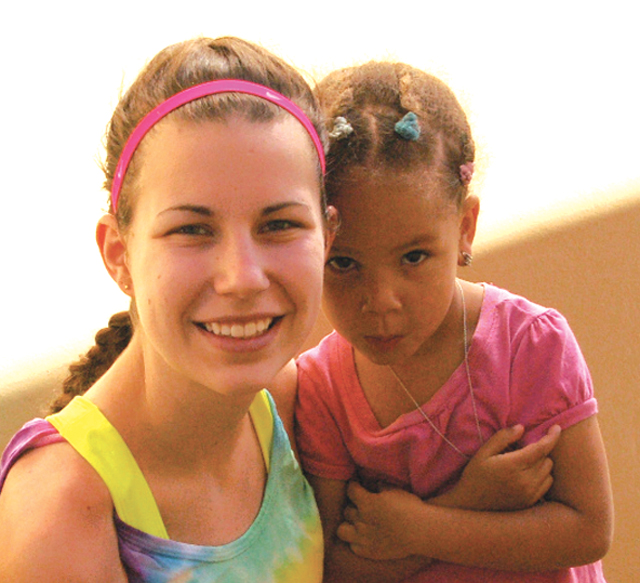 “Come and see,” is what Mother Teresa told people to do and that is exactly what the D.R.E.A.M.S. experience allowed me to do. You will always hear stories about what life is like in third world countries, but actually having the opportunity to witness their way of life on a firsthand basis is truly an eye-opening experience...All the members of the community worked together with us as we helped build a new home...Every opportunity they had, even the children, they would spend with us building the house, playing games with us, or even just sitting there in silence. The only thing that mattered to them was that we were there.
Ali Herron 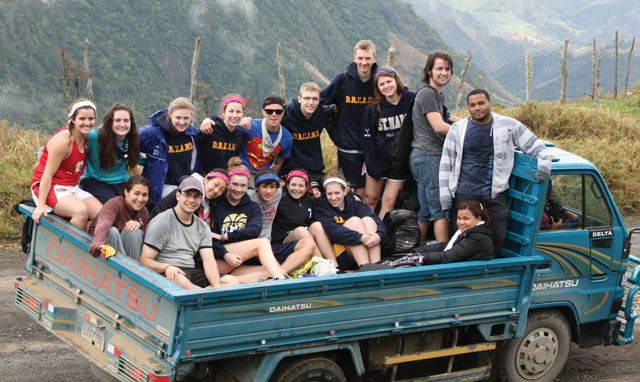 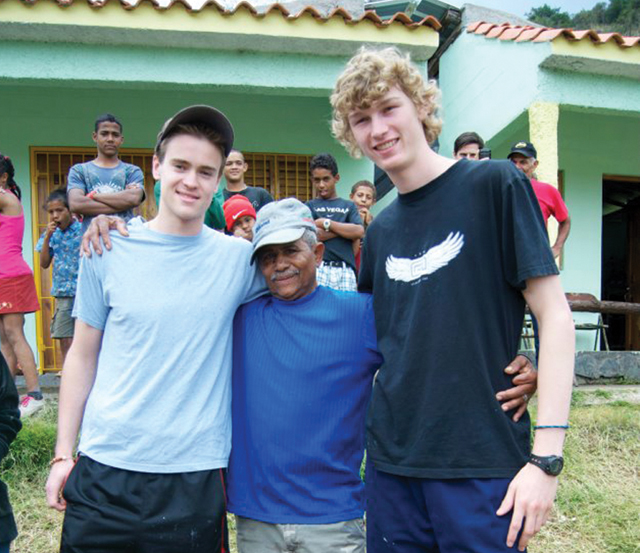 Above (left) with Darios, a foreman with ADESJO, and Kurt Lukosius

Some may say that the people of the Dominican Republic are less fortunate then we are in Canada. Without giving this idea much thought, many would agree. However, after living among the people of Ocoa, I realize they have undoubtedly recognized what really matters, and as a result, perhaps they are really the ones who are lucky in life.
Alex Chciuk 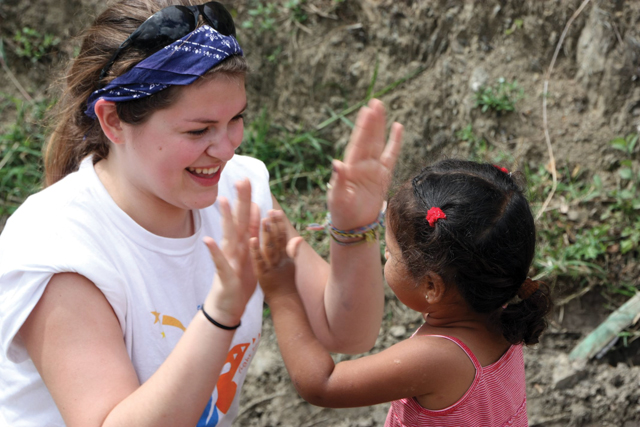 I don’t think I stopped smiling for a minute when I was there. Except when we were all pouring our hearts out, crying and growing closer during reflection. But those tears weren’t of unhappiness; they were tears of realizing how selfishly we live and how much this experience has impacted our lives...Prior to D.R.E.A.M.S. I had just been living to live, but during D.R.E.A.M.S. I realized that I want to live to make a difference. 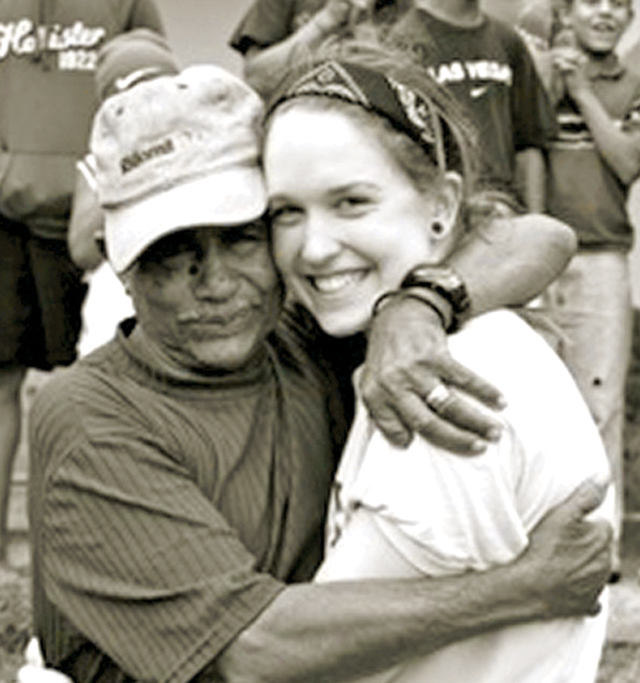 I’m the kind of person who gets stressed out and worked up about the silliest issues and seeing the way the Dominicans live really put things in perspective for me. How can I place so much emphasis on trivial things when there are people in the world who are barely surviving?
Taylor Kretz
Veronica Campagna 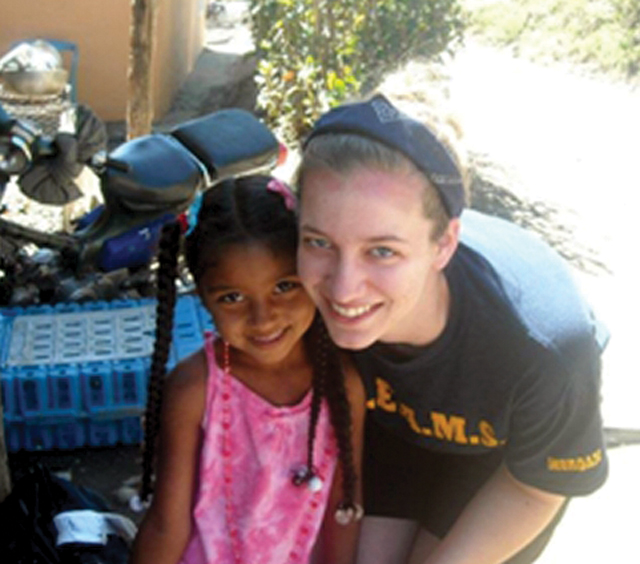 Living in El Puente for five days, really opened my eyes to how other people in the world live.
Morgan Halliwell

The week I spent on D.R.E.A.M.S. was the best week of my life...I was taught about myself and about others and about the world...I learned that there is a lot more to be seen than what is inside my city of Hamilton.
Danielle Jones 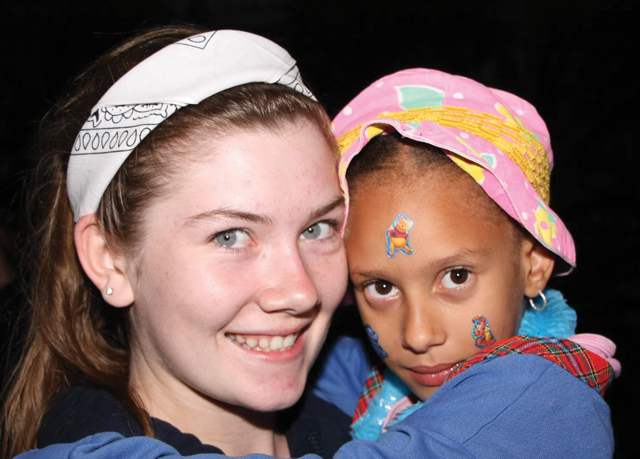 The stories of our trip will never do justice to the adventures and the feelings we experienced. It opened our eyes to the struggles the Dominicans face and we have all promised to continue to do whatever it takes to help them in any way possible.
Erin Riddell 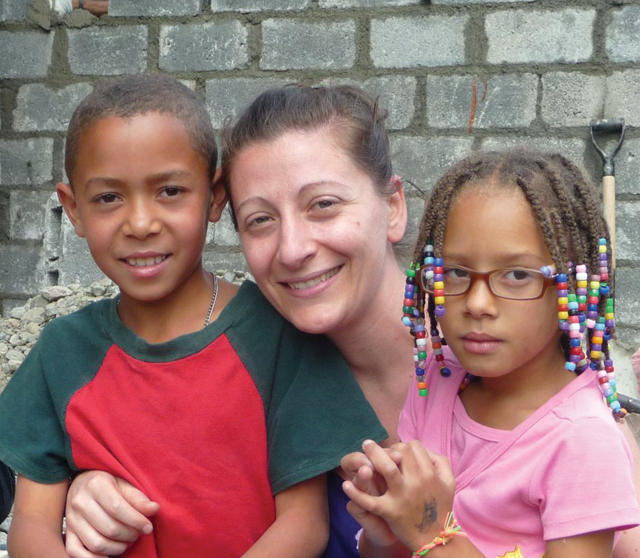 What the Dominicans consider valuable in their lives made me reconsider my priorities in life. They live in small communities, very small living spaces and have few amenities. What the Dominicans value are the family and friends around them, being respectful, working hard, being kind and coming together as a community. We instantly became a part of their community. They treated us as if we each belonged. The work we did was labour intensive and included lifting cinder blocks, shovelling sand, and digging into the ground. Yet, the difficulty of the labour did not compare to the difficulty of going home. Arriving home brought tears to my eyes because I realized how much I have compared to the Dominicans. It made me re-evaluate how I have been living my life. The best way to explain what I can do is expressed in a quote that is often attributed to Mahatma Gandhi: “Live simply, so that others may simply live.”
Nadia Fortino
St. Mary CSS teacher 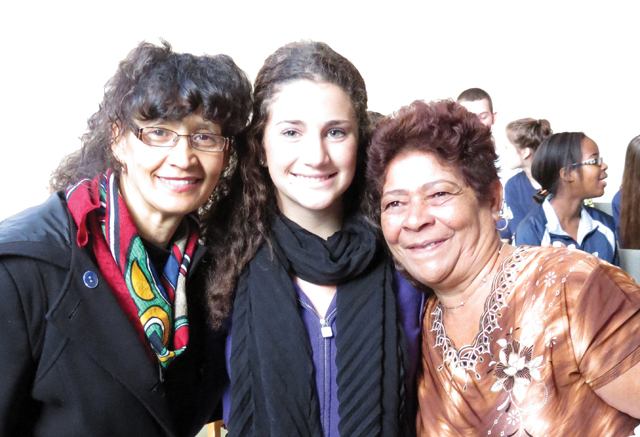 Being born and raised in San José de Ocoa, when I look back at my childhood memories, I remember ADESJO and Scarboro missionary Fr. Lou Quinn always working hard at building communities and encouraging the people to support each other by working cooperatively.

God sent Scarboro missionaries and the Religious Hospitallers of St. Joseph of Kingston, Ontario, to the town and surrounding mountains of San José de Ocoa. God heard the cry of the people and sent those hands to heal the sick, to clothe the naked, to feed the hungry, and bring justice to the oppressed. The people were oppressed not only by poverty and precarious living conditions, but also by more than 40 years of political dictatorship under Generalisimo Trujillo during which the people were crippled with fear, their rights taken away by the power of a regime that was destroying their human dignity...

Fr. Lou brought hope to the people; a light that is still there today. The community responded to his ministry. The echo of his voice spread wide to the most distant corners of the region. To work for justice and solidarity, many hands joined together. From the nucleus first formed in Ocoa grew the community development association, ADESJO, known to the people as La Junta.

Today we are paying tribute to ADESJO for their dedication, commitment, and hard work to benefit the most needy in their community and also for their partnership with Canadian communities, especially with D.R.E.A.M.S.

I am filled with gratitude and wish to express my appreciation to the remarkable ADESJO leadership team for their work and efforts to reach out to the poor of San José de Ocoa. Many have dedicated their lives to the development and benefit of ADESJO. Today this organization flourishes because of the commitment and strong faith of all those who believe and nourish the vision of Fr. Lou.
Ernestina Sepulveda 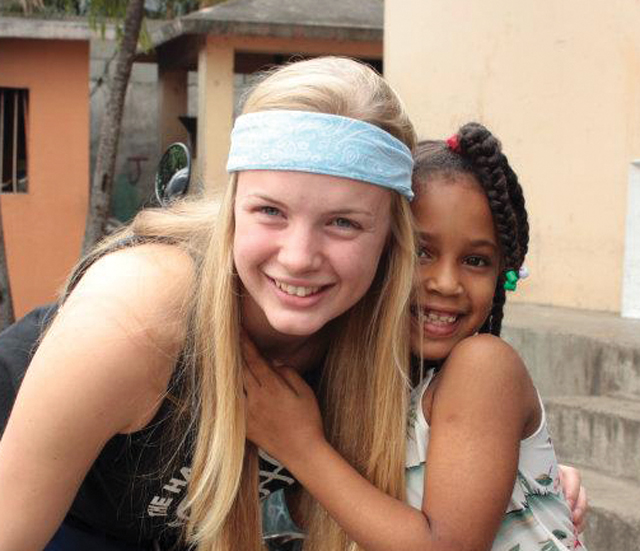 The first night home in Canada for me was hard; I felt like a piece of me was still in the village...Even now three months later I catch myself being wasteful of my resources and find myself thinking of a little boy named Anderson.

Anderson reminded me of my two brothers, Conner and Logan. The three of them are around the same age, seven to nine years old, have loving families, and are happy. However, that is where the similarities end. I can’t even begin to comprehend the difference in the lives they live. My brothers take a bus to school, have all their teeth, lots of toys, new clothing, and look nourished. Anderson walks to school, does not have all his teeth, has few toys, wears torn clothing and weighs half, if that, of what my brothers weigh.

The people in the Dominican Republic know that their situation is different from ours, but that does not stop them. They dream, they work every day and they never give up. The people in our village treated us like extended family members. We worked through the language barriers and came together to build a home for a family. I remember the night the doctor translated a mother’s thanks for our help in building her home and what it meant for her family to have a house of their own.
April Coyne 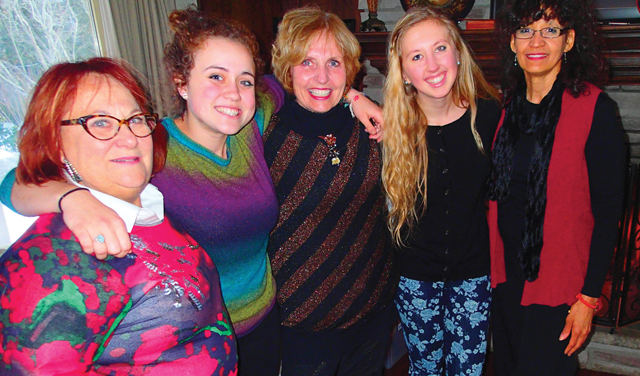 Over the years, D.R.E.A.M.S. has become a symbol of the desire and transformational power of youth to change the world, one family, one home at a time. This year I had the special honour to be with approximately 60 outstanding Catholic students from St. Mary and Bishop Tonnos Catholic Secondary Schools who responded to God’s call to be God’s hands in the world. Together we experienced a truly Catholic Christian community in its purest form. We returned enriched in so many ways but also compelled to continue to make a difference in the world. The words of Matthew 25:40: “Whatsoever you do to the least of my brothers, that you do unto Me,” came alive and now resonate within our hearts with greater clarity. I am so very proud of our students and all those who support them on their journey of discovery and faith.
Patricia Amos
Director of Education, Hamilton-Wentworth Catholic District School Board

Letter to the Editor

I was very moved by the reflections of the Hamilton youth in the D.R.E.A.M.S. article about their visit to the Dominican Republic (March/April 2012). It brought back memories of my own travels to San José de Ocoa in 1974 with Fr. Jack Lynch. We enjoyed a couple of wonderful days with Fr. Lou Quinn. My own son visited the D.R. with his high school DREAM Team as well, a few years ago.

I hope all the generations of students who have participated in these trips have seen with their own eyes the benefits of the impressive development projects initiated by the local community and “Padre Luis”—many of them financed by the Canadian Catholic Organization for Development and Peace. With the news that the Canadian government has slashed funding to Development andPeace by 70%, I also hope that students mobilize their friends and parents to oppose these cuts by contacting their government and local MP. The March 29 (2012) budget further cut Canada’s development assistance by almost 10 percent, an action which will hurt many other good projects around the world. These cuts do not just refer to numbers, but the faces and efforts of the people we’ve met and seen in the pages of Scarboro Missions.