Fr. Ron MacFarlane passed away on Monday, February 11, 2013, in the Cardinal Ambrozic House of Providence in Scarborough, Ontario. He died on the Feast of Our Lady of Fatima to whom he had a special devotion. 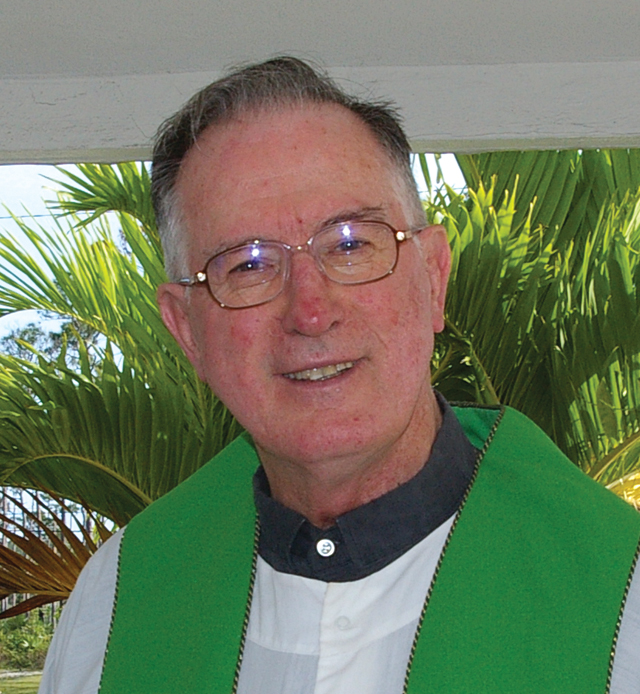 Fr. MacFarlane was missioned to the Dominican Republic following ordination and began language studies in Santo Domingo. Between 1963 and 1968 he served as curate in parishes in Azua, Bani, Santa Cruz, Padre de las Casas, Consuelo, and Yamasa.

Fr. Ron also served at the Interamerican Cooperative Institute in Panama from January 1970 to July 1971, and assisted Scarboro missionary Fr. Harvey Steele, the founder and first director of the Institute.

Fr. Ron loved his family. He often said that “home is where your story begins.” It was in his childhood home with his parents John and Ruth (Carroll) MacFarlane that the seed of faith was planted in Fr. Ron and all his siblings. It was from this setting that Fr. Ron’s devotion to the Virgin Mary sprouted, a devotion he was never ashamed to acknowledge.

Fr. Ron’s second love was the military, which he served for 21 years from 1973 until his retirement. According to the Department of Defense, he “raised the bar” for Armed Forces chaplaincy. He served in military bases across Canada, as well as in CFB Baden, Germany. He was also posted to the Second Canadian Destroyer Squadron based in Victoria, British Columbia, in 1976; to the Canadian contingent of the United Nations Emergency Force in the Middle East, and with the Canadian Navy in response to the Iraq invasion of Kuwait.

After Fr. Ron’s retirement from the military in 1994 he returned to Scarboro’s central house in Scarborough, Ontario, to work in house coordination. He returned to overseas mission in 1999, serving as assistant to Monsignor Ambrose MacKinnon, SFM, at the parish of Mary Star of the Sea in Freeport, Grand Bahama Island, Bahamas, and visiting the sick and the poor of the parish. He remained there until he was diagnosed with Lou Gehrig’s disease in 2001 and returned to Canada.

Fr. Ron’s wake and funeral services were held in the St. Francis Xavier Chapel of Scarboro Missions on February 14 and 15 respectively. He was remembered for being kind and generous with his resources and time, and for his enduring love of sports of all kinds. He often wore the jackets from his favourite sport teams, which he would soon give away to friends. With his passion for sports and encyclopedic knowledge of sports, he could have pursued a career as a radio or television sportscaster, but he chose the priesthood, serving the poor in mission with kindness and generosity. We are grateful to Fr. Ron for these gifts and for his deep faith and his love for the Church.

Fr. Ron is survived by three brothers, Gerard, Peter and Donald, as well as two sisters, Anne (Smith) and Rose Mary, and by many nieces and nephews. He was predeceased by his father John and his mother Ruth, two sisters, Margaret and Helen, and three brothers, Hugh, George, and John.

We thank God for the missionary life and example of Fr. Ron and will keep him in our prayers at the Breaking of the Bread.