Private Christianity is an illusion. If life and faith are not shared liberally, they collapse into utter chaos. We would also agree, I am sure, that response to our neighbour’s needs cannot remain on the purely spiritual level. We cannot simply pray for our brothers and sisters in need. It is not enough to feel compassion for Lazarus; Dives might have done as much (Luke 16:19-31). An increased emotional sensitivity will not change the lives of people who suffer. Compassionate love must be directed not only to the soul but also to the body. After all, this is the criterion Jesus used when he spoke about our final measuring up: we will be judged on how well we respond to concrete human needs, in a social as well as spiritual manner.

We have little problem with this, at least in theory. But I would like to suggest that not only is a spiritual approach insufficient, but so, too, is a merely social one. I am sure that very many of us have come to the point of recognizing that the Christian mission must be spiritual and social; prayer must be accompanied by good works.

The problem is that this does not go nearly far enough. The fact is, we need a third step: the Christian mission is also political. For many years many a preacher has been castigated for “bringing politics into the pulpit.” Acquiescing to the pressures of disapproval and intimidation has meant that preachers brought little of anything into the pulpit. Such muzzling of the full Gospel is increasingly intolerable in our present time of crisis.

A Call to Action

No one has led the way towards new understanding more than Pope Paul VI in A Call to Action (Octogesima Adveniens, 1971). In one of the most significant actions of his pontificate, he insisted on the indispensable expansiveness of the Church’s mission. We must shift from a policy of simply alleviating the results of oppression to one of also eliminating the causes of oppression. We are obliged to look not only at the immediate act of giving a cup of water in God’s name, but also at the structures that made the person thirsty in the first place. At the same time as we meet needs, we must also be engaged in a sophisticated political analysis of the root causes of poverty and oppression. 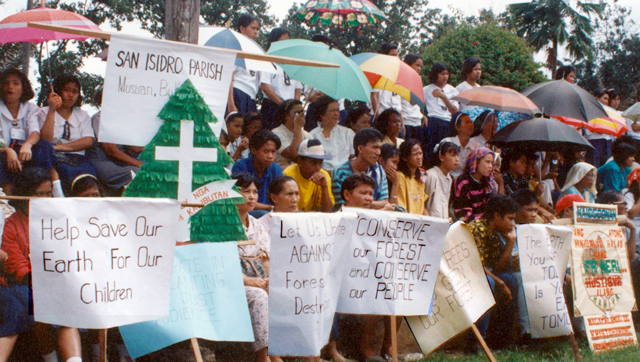 In the 1980s, parishioners from Bukidnon, Philippines, where Scarboro missioners were present, put faith into action by protesting government sanctioned logging companies doing large scale deforestation in the area, causing environmental and human suffering. Today less than 10 percent of old growth rainforest remains in the Philippines and this too is threatened by mining and other interests.

Christians believe that Jesus’ commandment to love one’s neighbour should extend beyond individual relationships to infuse and transform all human relationships from the family to the entire human community. Jesus came to bring glad tidings to the poor, to proclaim liberty to captives and recovery of sight to the blind, and to let the oppressed go free (Luke 4). He called us to feed the hungry, clothe the naked, care for the sick and afflicted, and comfort the victims of injustice (Matthew 25). His example and words require individual acts of charity and concern from each of us. Yet they also require understanding and action on a broader scale in pursuit of peace and in opposition to poverty, hunger, and injustice. Such action necessarily involves the institutions and structures of society, the economy, and politics.

The Church—the people of God—is itself an expression of this love and is required by the Gospel and its long tradition to promote and defend human rights and human dignity (Synod of Bishops, 1974). Pope John Paul II declared that the Church “must be aware of the threats to humanity and of all that seems to oppose the endeavour to make human life ever more human and make every element of life correspond to humanity’s true dignity—in a word, the Church must be aware of all that is opposed to that process.” (Redemptoris Hominis) This view of the Church’s ministry and mission requires it to relate positively to the political order, since social injustice and the denial of human rights can often be remedied only through governmental action. In today’s world, concern for social justice and human development necessarily requires persons and organizations to participate in the political process in accordance with their own responsibilities and roles.

Christian responsibility in the area of human rights includes two complementary pastoral actions: the affirmation and promotion of human rights, and the denunciation and condemnation of violations of these rights. In addition, it is the Church’s role as a community of faith to call attention to the moral and religious dimension of secular issues, to keep alive the values of the Gospel as a norm for social and political life, and to point out the demands of the Christian faith for a just transformation of society. Such a ministry on the part of every individual as well as the organizational Church inevitably involves political consequences and touches upon public affairs.

The church’s responsibility in this area falls on all its members. As citizens, we are all called to become informed, active, and responsible participants in the political process.

The church’s responsibility in this area falls on all its members. As citizens, we are all called to become informed, active, and responsible participants in the political process. It is the laity who are primarily responsible for activity in political affairs, for it is they who have the major responsibility for renewal of the temporal order. Says Vatican II: “The laity, by their very vocation, seek the kingdom of God by engaging in temporal affairs and by ordering them according to the plan of God…They live in the ordinary circumstance of family and social life, from which the very web of their existence is woven...they are called there by God so that by exercising their proper function and being led by the spirit of the Gospel, they can work for the sanctification of the world from within, in the manner of leaven.” (Lumen Gentium)

The hierarchy must not be overlooked. They have a distinct and weighty responsibility in this area. As teachers and pastors, they must provide norms for the formation of conscience of the faithful, support efforts to gain greater peace and justice, and provide guidance and even leadership on occasions when human rights are in jeopardy. Drawing on their own experience and exercising their distinct roles within the Christian community, clergy, religious and laity should join together in common witness and effective action to bring about Pope John Paul II’s vision of a well ordered society based on truth, justice, charity and freedom. (Familiaris Consortio)

The Church’s distinct role in the political order includes the following:

It is unfortunate that our efforts in this area are sometimes misunderstood. The Church’s participation in public affairs is not a threat to the political process or to genuine pluralism, but an affirmation of their importance. The Church recognizes the legitimate autonomy of government and the right of all, including the Church itself, to be heard in the formulation of public policy. As Vatican II declared: “By preaching the truth of the Gospel and shedding light on all areas of human activity through her teaching and the example of the faithful, she (the Church) shows respect for the political freedom and responsibility of citizens and fosters these values…She also has the right to pass moral judgements even on matters touching the political order, whenever basic personal rights or the salvation of souls make such judgements necessary.” (Gaudium et Spes)

The key to a renewal of public life is reorienting politics to reflect better the search for the common good: reconciling diverse interests for the well-being of the whole human family. If politics ignores this fundamental task, it can easily become little more than an arena for partisan posturing, the search for power for its own sake, or an interest group conflict. Pope John Paul II warmly praised democratic values but warned against a “crisis within democracies which seem at times to have lost the ability to make decisions aimed at the common good.” (Centesimus Annus)

The key to a renewal of public life is reorienting politics to reflect better the search for the common good.

As religious leaders and pastors, our intention is to reflect our concern that politics receives its rightful importance and attention and that it becomes an effective forum for the achievement of the common good. In the words of Pope John Paul II: “An important challenge for the Christian is that of political life. In the state, citizens have a right and duty to share in the political life. For a nation can ensure the common good of all and the dreams and aspirations of its different members only to the extent that all citizens in full liberty and with complete responsibility make their contributions willingly and selflessly for the good of all.” (Homily in Nairobi, 1980)

Faith in the City

On January, 24, 2013, Toronto City Councillor Joe Mihevc (above left) presented a Certificate of Recognition to Paul McKenna, coordinator of the Scarboro Missions Interfaith Department for his teaching and work in the interfaith community, and “in recognition of his creating the Golden Rule poster, which illustrates the united vision of world religions to build the common good and a more compassionate society.” This multifaith poster has achieved international renown as an educational and interfaith resource.

The presentation took place during the multifaith symposium, Faith in the City, held in Toronto city council chambers. During a half day of workshops, faith leaders, citizens, and politicians gathered to discuss issues such as homelessness and housing, food security and poverty, refugees and disadvantaged youth, and looked at ways to collaborate for action. Participants saw the need for effective government policies to address the issues and focused on ways in which different faith communities can work together in bringing about change.

Attendee Fr. Damian MacPherson, Director of Ecumenical and Interfaith Affairs at the Archdiocese of Toronto, said, “To whatever degree religion loses its power and presence in society, it’s to our own disadvantage. Religion has a voice and that voice needs to be heard, and it should be spoken clearly without bias.”

City councillors Joe Mihevc, Mike Layton and Sarah Doucette were among the politicians attending the event.