Living among the poor in Malawi, I have learned to appreciate the gift of water, a gift I took for granted in Canada

While living in Canada, it never crossed my mind how much I took for granted a constant supply of clean water. I could be assured of water every time I turned on a tap. And I could always flush the toilet. 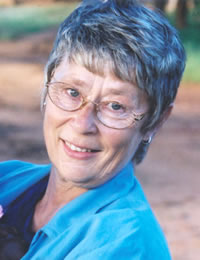 I recognized the loss of this unheralded privilege when I came to Malawi as a Scarboro lay missioner in 2000. One of the harsh realities of the area that I live in is the lack of a constant supply of water as well as clean water. It was not just a matter of adapting to this reality, I now had to plan part of each day around the task of obtaining water.

Water to the compound is piped by gravity into three tanks from a river up in the mountains about seven kilometres away. The water supply is turned on in the morning and later in the afternoon, at which time the whole community fills their pails. Sometimes the pipes break and we are without water for a few days.

Through overseas donations, we now have eavestroughs on some of the houses in our compound so people can catch rainwater, which is much cleaner than the water from the taps. I often get up in the middle of the night to put out pails when I hear the rains start.

For me, the most difficult aspect of not having a constant supply of water is not being able to flush the toilet. I remember the day I saved dishwater to recycle for the toilet. Instead of pouring it into the toilet bowl, I poured it into the tank. A short while later the tank was covered in ants, attracted by the smell of food in the water. I never made that mistake again.

Sometimes days go by without my being able to take a shower. Either the water is not on or the water pressure is not strong enough. When I was preparing to come to Malawi, I wondered how I would adjust to cold showers. Surprisingly, I soon got used to them and quite enjoy them now.

Despite these adjustments, I consider myself fortunate because most local people do not have running water in their homes like I do. They get their water from a common tap. If the water is off, they fetch water from the nearby river. Very few boil the water before drinking, as they cannot afford the extra wood for the fire. 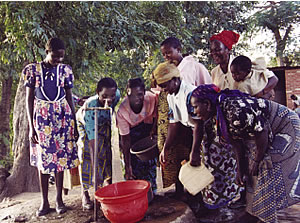 Coolman, a young man who works for me, often comes to my house to get water to wash with or to cook his supper. Because he is away at school all day, he cannot replenish his own supply of water when the taps are turned on. It is at times like these when the reality of having to share a very basic need with others has a very strong impact on my views.

When I return to Canada I will look at water in a whole new way and remember my neighbours and friends in Malawi who struggle for this blessed gift of life.