Think of all the ways we use water in one day. We depend on water for cleansing, nourishment, recreation, entertainment, agriculture, industry, transportation, religious rituals and inspiration. Our relationship to water is daily, often and multiple, but there are dimensions of water to be explored beyond our use of it. In examining the nature and sacredness of water, we begin to understand water within a new context in which humans are not the sole reference point, but rather part of the whole web of creation.

The nature of water

According to the author, Heather Eaton, to start with the ecology of water opens new possibilities of understanding water and its issues within a new context where humans are not the reference point, but rather part of the interdependent web of life.

What is water? To answer this question, we need to look back to the Earth's creation and evolution beginning more than four billion years ago. Over hundreds of millions of years the Earth developed from dust particles into a large, hot, molten planet with a thin rocky crust. The climate was sulphuric, toxic to life as we know it, and at boiling temperatures for millions of years. As steam condensed, the miracle of rain and weather cycles began. The first rains fell, followed by torrential rains, until rivers ran over the Earth's surface and pooled into great seas. For 300 million years it rained day and night, cooling the surface.

Thus began a continuous circulation of water known as the hydrologic cycle. In this delicately balanced cycle, the sun causes water to rise as vapour from the oceans, cool, fall back on the Earth as fresh water, and return to the oceans. It is a cycle that nourishes, purifies and cleanses.

Another example of the stunning gracefulness of the Earth's systems is the relationship between water and forests. Rain falls onto the trees and descends into the root systems, soil and organisms. From there it is taken up into the trunks and leaves. This sophisticated process-that took the Earth two billion years to fine-tune-releases oxygen and excess water vapour, now purified. Large forests are their own ecosystems, demonstrating the purification systems, lifecycles and wizardry of water. This is one reason why deforestation has a major impact on water availability, soil erosion, pollution in rivers and ground water, and an overall loss of available freshwater.

Earth is often called the blue planet because of the abundance of water on its surface. However, 97.2% of that is ocean. Only 2.8% is freshwater, most of which is frozen in glaciers and ice sheets. That leaves less than 1% of freshwater resources available, and that is all there ever will be. The waters of the Earth exist in a closed system and no more freshwater can be added to the cycle.

All life is related to water

Water is a raw material of creation. The emergence of life and the presence of water are intimately bonded. Most life originated in the oceans 3,500 million years ago. The salt in our blood is literally the history of the emergence of life from the salty oceans. All life is related to water. Mammals, including humans, still emerge from water-the embryonic fluids. Water flows through every cell of every life form. It is in every part of us-our memories, cells, blood, spinal fluid and digestive workings. Sophisticated systems in our bodies retain, eliminate or evaporate water. Babies are 75% water, men 64% and women 58%. Even our food contains water: 95% of a tomato, 90% of milk, 85% of an apple and 80% of a potato.

Water has a very simple molecular composition: two hydrogen and one oxygen, yet it is a physical anomaly. Water can exist in all three states-as a liquid, a solid and a vapour-depending on the temperature. It is denser as a liquid than a solid-while most other liquids sink in solid form, solid water (ice) floats and expands. Ice insulates the oceans, prevents evaporation, keeps temperatures stable and enables aquatic life to survive the winter. Snow and ice prevent the Earth from warming too quickly. Even the whiteness of snow, ice (solid water) and white clouds (water vapour) reflects rather than absorbs sunlight and energy, keeping temperatures stable.

Water absorbs large amounts of energy (heat) without evaporating and cools slowly. Within the whole Earth system, it both absorbs heat and transports warm water through huge ocean currents to warm other parts of the Earth. Oceans regulate the Earth's temperature by storing heat in summer and releasing it in winter. The next time you get very cold or very hot, understand that it is the water in your body preventing you from dehydrating, freezing or boiling to death. 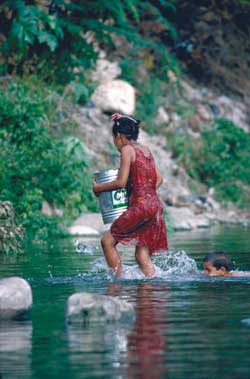 Pausing to have a little fun while collecting water for the family. Dominican Republic

The spirituality of water

"If you knew the gift of God, and who it is that is saying to you, 'Give me a drink,' you would have asked him, and he would have given you living water." (John 4:10)

Water is a sacred symbol in all religions and is frequently found in sacred texts. Faith traditions use water in imagery, rituals, prayers and teachings. Each tradition has an awareness of the natural world as a primary place of revelation and religious experience, a place of beauty, elegance and inspiration. Since time immemorial, water-indeed the entire natural world-has revealed the Divine.

Water flows through, sustains and cleanses all. Thus we can speak of "sacred waters" not just as a symbol, because water is the sustainer of life-it is truly living water. Yet, in mainstream culture to consider water as sacred seems superfluous, as if it is only legitimate to view life as a commodity and to discuss ecological ruin in credit and debit terms. This governing economic worldview must be countered with a more powerful and alluring understanding of life where the Earth and its life forms are not a set of resources but modes of Divine presence.

It is imperative that we reawaken to an awareness of a sacred presence active within the Earth's sublime and sophisticated life systems, including water, to which the appropriate response is awe.

Awareness of the power of wonder and awe is available to anyone who spends time in the natural world. This awareness is returning in a new way in the face of today's ecological crisis. A Taoist insight affirms:

"Those of us who contemplate the world soon come to have a great sense of wonder. The perfection of the stars, the beauty of mountains and streams, the invigorating quality of clean ocean air fills us with feelings of celebration and reverence. Reverence only comes with experience and care. We must be responsible, and at the same time express the wonder of all that we know as human."

Wonder and awe lead to reverence, and reverence leads to responsibility. Reverence for and responsibility to the natural world are intimately connected to each other, and to authentic religious experience. 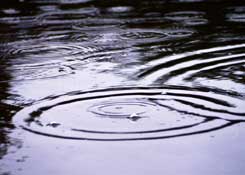 "Rain! Whose soft architectural hands have power to cut stones, and chisel to shapses of grandeur the very mountains." Henry Ward Beecher, preacher and writer (1813-1887)

To see and know the spirituality of water requires a new way of perceiving, and a confidence that to experience a river or swamp as sacred is not quaint, incidental, irrelevant or even heretical. Even the tiniest caterpillar is a book about God, as noted the Christian mystic Meister Eckhart. Ecologically oriented religious voices affirm that this kind of awareness is not a luxury, but the basis of religious experience and a necessary part of ethical deliberations and political motivation.

Wonder and awe can become a way of seeing and of informing our political visions. Herein lies the terrain of genuine new insights, understandings, ethics, analyses and awareness. From here can emerge a dynamic political orientation and energy.

The primary mode of knowing in Western societies is analytic. Yet analysis has its limits. Analysis sheds light on aspects of a situation, exposes patterns, systems, causes and effects, and unmasks power dynamics. But it cannot open the door to profound insights, to what can be known beyond all conventional knowing. Awe is also a way of knowing. It is a dimension of life experience and the essence of religious awareness. Its social relevance is often belittled, ignored or dismissed, as if awe is acceptable only as private experience rather than as a moment of revelation; as personal spirituality rather than as a crucial dimension of religious investigation.

The capacity for awe remains omnipresent; a quiet eminence that radiates everywhere. It creates an unflinching and preeminent awareness of the extraordinary, abundant, unique and interconnected array of life. To marvel at the natural world within the large horizon of the cosmic adventure-and to understand to what degree we are embedded within this drama-requires us to return to an appreciation and understanding of life on Earth as being interconnected and Divinely inspired. The whole is greater than the sum of the parts. It all matters. 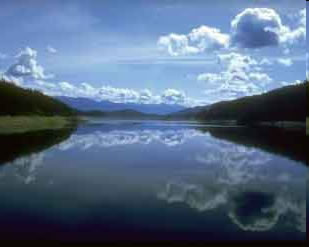 "We can never sneer at the stars, mock the dawn or scoff at the totality of being. Sublime grandeur evokes unhesitating, unflinching awe. Away from the immense, clositered in our own concetps, we may scorn and revile everything. But standing between Earth and sky, we are silenced by the sight." Rabbi Abraham Heschel

Tampering with water is a threat to our physical being, a reprehensible moral choice, and a desecration of the sacred. To ruin Earth's water is offensive beyond words. It makes us unworthy of the gift of life. With a reverence for water-its simplicity, its sacredness, its place within the genius of the Earth-comes an awareness that we are held within the beauty and intricate patterns of water. From this position of humility, awe and wonder, we can approach water issues such as the human right to water, privatization of water resources, and pollution, with deeper, more truthful and more effective responses.

Heather Eaton holds an interdisciplinary Ph.D. in ecology, feminism and theology from the University of St. Michael's College, Toronto School of Theology, and a Master's of Divinity. She is an assistant professor in the Faculty of Theology at St. Paul University, Ottawa.