Catholic Social Thought (also known as the Social Doctrine of the Church) is a body of teaching on economic, political, social, and cultural issues developed by the Catholic Church. While its roots lie in early Christianity and Scripture, modern Catholic Social Teaching began with Pope Leo XIII’s social encyclical Rerum Novarum (The Condition of Labor) in 1891. It includes the social encyclicals of various popes, documents of the Second Vatican Council, as well as statements of local and regional conferences of bishops. Below are just a few Catholic Social Teaching documents: 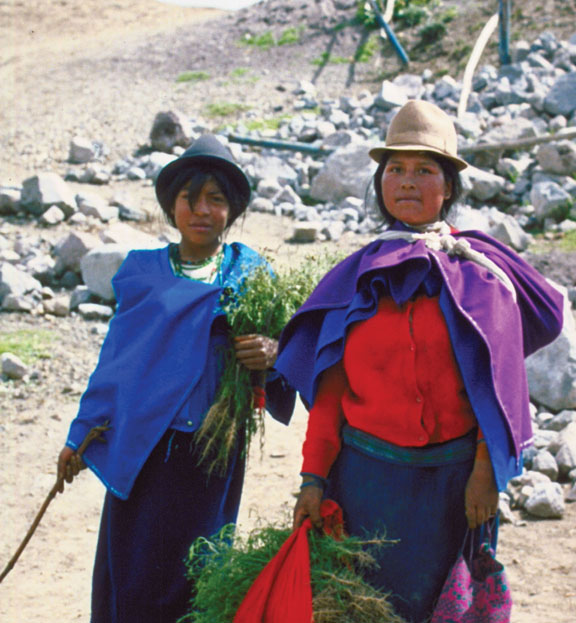 Indigenous woman and her children, villagers of the Andes mountains, Chimborazo Province, Ecuador.

“Solidarity is a firm and persevering determination to commit oneself to the common good; that is to say to the good of all and of each individual, because we are all really responsible for all.”

Rerum Novarum (Of New Things) 1891, Pope Leo XIII — Essentially the beginning of modern Catholic social teaching and a foundational document for many subsequent encyclicals. Addresses the plight of workers in the wake of the Industrial Revolution, touching on issues that include socialism, unbridled capitalism, a living wage, workers’ rights, support for unions, and a rejection of class struggle. Pope Leo first articulated the principles that underlie the preferential option for the poor.

Quadragesimo Anno (After Forty Years) 1931, Pope Pius XI — Commemorating the 40th anniversary of Rerum Novarum, this encyclical offers an update on the state of labour and industrialization, and strong critiques of communism, unrestrained capitalism, class conflict, and inequalities. Pope Pius denounces the concentration of wealth and economic power, and calls for the reconstruction of the social order based on subsidiarity.

Pacem in Terris (Peace on Earth) 1963, Pope John XXIII — Issued only two months before the Pope’s death, this encyclical is the first to be directed to “all men of good will,” instead of just to Catholics. In a response to the Cold War, the encyclical outlines necessary conditions for lasting world peace, looking at respect for human rights and disarmament. Pope John calls for the development of a world authority to protect the universal common good, condemns the arms race, and supports efforts to build peace.

Populorum Progressio (On the Development of Peoples) 1967, Pope Paul VI — This encyclical, which Pope Benedict’s Caritas in Veritate commemorates, examines the economy on a global level, and addresses the rights of workers to decent work, just wages, decent working conditions, and to form and join unions. Pope Paul VI calls development “the new name for peace,” criticizes unjust economic structures that lead to inequality, and supports new international and social relationships.

Laborem Exercens (On Human Work) 1981, Pope John Paul II — Issued to mark the 90th anniversary of Rerum Novarum, this encyclical once again emphasizes the dignity of work and the rights of workers, and the priority of labour over capital. Also addresses disabled workers, emigration, materialism, and the spirituality of work.

Sollicitudo Rei Socialis (On Social Concern) 1987, Pope John Paul II — This encyclical honored Populorum Progressio on its 20th anniversary, offering solidarity as a central requirement of our faith and times. Pope John Paul critiques East‐West blocs and other “structures of sin” that compromise the progress of poor nations, and calls for solidarity between rich and poor nations.

“It must be asked how many Catholics really know and put into practice the principles of the church’s social doctrine.”

Centesimus Annus (The Hundredth Year) 1991, Pope John Paul II — On the 100th anniversary of Rerum Novarum, John Paul II reflected on the current state of issues that Leo XIII had addressed in his day. It focuses on the moral dimensions of economic life, the advantages and limitations of the market, the role of business, and the responsibilities and limitations of government.

Deus Caritas Est (God is Love) 2005, Pope Benedict XVI — Benedict’s first encyclical emphasized the connections between love of God and love of neighbour. Pope Benedict said the Church could no more neglect charity than it could Scripture or the sacraments. He located love of the poor at the centre of Catholic life.

Caritas In Veritate (Charity in Truth) 2009, Pope Benedict XVI — This encyclical follows up on the themes of Pope Paul VI’s Populorum Progressio, calling it the Rerum Novarum of the present age. It deals with the ethics of contemporary economics; poverty and development; global solidarity; charity, justice and the common good; rights and duties; and care for creation, among other topics.

The above is taken from the “Social Encyclical Primer” of the US Conference of Catholic Bishops. The following is from Hill Connections

Justice and Evangelization in Africa, 1981, Bishops of Africa and Madagascar.

Economic Justice for All: On Catholic Social Teaching and the US Economy, 1986, US Bishops.

The Common Good and the Catholic Church’s Social Teaching, 1996, Bishops’ Conference of England and Wales.

God Hears the Cry of the Oppressed, 2007, Zimbabwe Bishops.

Gaudium et Spes (Pastoral Constitution on the Church in the Modern World) 1965, Vatican Council II — Christian responsibility towards the world and the human condition.

Justicia in Mundo (Justice in the World) 1971, World Synod of Bishops — A call to action for justice and to participate in transforming the world as constitutive dimensions of preaching the Gospel.

The poster in the centrespread of this issue is based on the rich tradition of the Social Teaching of the Church and highlights its key principles. For a more complete list of Social Teaching documents and information, visit the Justice and Peace section.