A reflection on solidarity as a principle of Catholic social teaching

Solidarity is a relatively new word in Catholic social thought. It is about valuing our fellow human beings and respecting who they are as individuals. Many of us will recall the word “solidarity” used in connection with Lech Walesa and the trade union movement in Poland. It is only in the last few decades that we encounter this word in Church documents and Catholic social thought.

Solidarity refers to both an attitude and a way of living, and we encompass both dimensions when we speak of a “spirit of solidarity.” Pope John Paul II in his encyclical, Sollicitudo Rei Socialis (The Social Concern of the Church) wrote: “We are all one family in the world. Building a community that empowers everyone to attain their full potential through each of us respecting each other’s dignity, rights, and responsibilities, makes the world a better place to live.”

Speaking to participants at the Meeting of Popular Movements last year, Pope Francis said that solidarity “means thinking and acting in terms of community, of prioritizing the life of all, over and above the appropriation of goods by the few. It also means fighting the structural causes of poverty, inequality, unemployment, lack of land and housing, and the denial of social and labour rights. It means facing the destructive effects of the empire of money: forced displacement, painful migration, human trafficking, drugs, war, violence and all these situations that many of you suffer and that we are called upon to transform. Solidarity, in its deepest sense is a way of making history…” 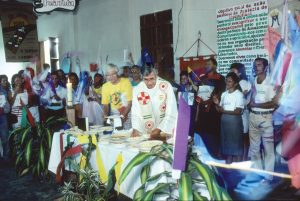 Bishop George Marskell with participants at the Assembly of the People of God, held every two years in the Prelacy of Itacoatiara, Brazil. Each of the almost 300 base Christian communities sent one representative to voice concerns, celebrate victories, and debate and decide upon pastoral priorities. The last People’s Assembly was held in 1998, a month before Bishop Marskell’s death.

Pope Francis uses the word “solidarity” to express the challenge that he sees before us today. Speaking about peace he said, “The many situations of inequality, poverty, and injustice, are signs not only of a profound lack of fraternity, but also of the absence of a culture of solidarity.” He also said, “When we open ourselves to life and serve life, we experience the revolutionary force of love and tenderness, giving rise to a new humanism: the humanism of solidarity, the humanism of life.”

In The Social Concern of the Church, Pope John Paul II tells us that solidarity “is not a feeling of vague compassion or shallow distress at the misfortunes of so many people, both near and far. On the contrary, it is a firm and persevering determination to commit oneself to the common good; that is to say to the good of all and of each individual, because we are all really responsible for all.”

It should be noted that The Social Concern of the Church was the first papal document to commit the whole Church to the option for the poor in imitation of Jesus and in living out our social responsibilities.

Pope Francis has been inviting all of us to be converted away from the three cultures that materialism has promoted: the culture of comfort that makes us think only of ourselves; the culture of waste that seizes the gifts of creation only to enjoy them briefly and then discard them; and the culture of indifference that makes us indifferent to our neighbour and to God. In his Lenten message this year Pope Francis referred to this as the “globalization of indifference.” Each year during Lent we need to hear once more the voice of the prophets who cry out and trouble our conscience.

Jesus’ teaching on the Reign or Kingdom of God, which is based upon the all-inclusive solidarity of the human race, was radical and revolutionary: “You have learned how it was said: You must love your neighbour and hate your enemy. But I say this to you: Love your enemies” (Matthew 5).

In the Old Testament the command to love one’s neighbour was understood as to exclude one’s enemy. Jesus teaches us that our neighbour includes our enemies as well. As Fr. Albert Nolan observes in his book, Jesus before Christianity: “He could not have found a more effective way of shocking his audience into the realization that he wished to include all in this solidarity of love.”

Scarboro missionary Bishop George Marskell’s words to the People’s Assembly of the Prelacy of Itacoatiara, Brazil, in June 1998, one month before he died.

Jesus never excluded the Pharisees and Scribes. He never refused to argue, discuss, or mix socially with any of them. It was they who excluded him. And, from his teaching and practice, he sided with the poor and sinners, those who were excluded by others. As Fr. Nolan says, “Solidarity with the ‘nobodies’ of this world, the ‘discarded people’ is the only concrete way of living out a solidarity with all humankind.”

For me the principal characteristic of the attitude and ministry of Jesus is compassion. It is only compassion and mercy that can teach us and lead us to the solidarity of the Reign of God.

It should not surprise anyone that Pope Francis has decided to call an extraordinary Jubilee. It shall be a Holy Year of Mercy from December 8, 2015, to November 20, 2016, the feast of Christ the King. He emphasized, “We want to live this Year in the light of the Lord’s words: ‘Be merciful, just as your Father is merciful’” (Luke 6:36).