Life after mission in Malawi 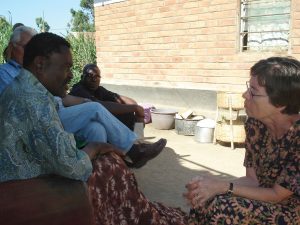 As Scarboro missioners in Mzuzu, Malawi, Beverley (above) and Ray Vantomme were frequent visitors to the home of their friend, Andrew Mkandawire, who was disabled as a result of a stroke.

Like many missioners, after several years in Malawi, saying goodbye to friends and colleagues was a sad experience for my husband, Ray, and me. While there were many practical reasons for our departure, it was difficult to leave a community that had become an integral and passionate part of our life and faith.

Our missionary experience in Malawi is not easy to express in words. This was a time of new learnings, both positive and negative. For example, we came to understand that like Canadian parents, Malawians have the same hopes and dreams for their children—that they will be healthy, that they will have a good education and eventually find employment. However, we also entered a country devastated by HIV/AIDS.

There were many challenges. Learning a new language was a struggle. The greatest difficulty was witnessing the reality of abject poverty. When we arrived in Malawi it was the end of a 36-year dictatorship and years of corruption and oppression. Malawi was dependent on foreign aid but that aid rarely, if at all, found its way to the poor. Yet, amid all these hardships, the people thanked God for the life they had. Their prayer of gratitude often erupted in song and dance.

This opportunity to walk with the people of Malawi was made possible by Scarboro Missions and their invitation to accompany them in mission. The preparation program strengthened us in our journey and included workshops and theological reflections on the many facets of poverty and injustice. We learned that we were not going overseas to fix problems, but to walk with the people in solidarity as best we could. These reflections sustained us especially in times of famine and starvation in the country.

Coming home to a new culture

Coming home to Alberta in August 2007 felt like we were again entering a new culture. Even a trip to the grocery store could be overwhelming with its rows of perfectly shaped and coloured vegetables and fruits. The markets in Malawi were colourful, but the locally grown produce was not perfect.

Alberta’s oil industry was booming, with development everywhere. We wondered where we could fit in. The province had also become culturally diverse and multifaith. This excited us as we continued to feel called to be among persons from other cultures. Eventually, we found our way. Ray worked (and now volunteers) among new Canadians at The Kerby Centre where seniors take part in many activities that assist them to live in their communities as long as possible. I worked with newcomers to Canada, teaching them English and helping them with resettlement issues.

We have also been blessed with belonging to an alive and growing parish that has two priests, one from India and the other from Pakistan. It is a parish with a wonderful ethnic and cultural diversity.

After a year in Canada, the “Coming Home” retreat offered by Scarboro Missions was a tremendous support. This week spent with other returning missioners from several organizations was a time when we could share our experiences of overseas mission, the blessings and the frustrations. The facilitators guided us to bring closure to that chapter of our lives and transition to life at home.

Canada is preparing to welcome many newcomers who have experienced a turbulent history that may have included political and religious oppression or genocide. Their sense of safety and security may have impacted their mental and physical well being as well as altered their world-view. All Canadians will be invited to be part of this rich experience of being open to the face of God in “the other.”

“It is a profound experience of Eucharist to be among people who care deeply for others, who love those who are abandoned and on the fringes of the community…We who have education, wealth, power, or prestige may have a tendency to close in on ourselves. We dissociate ourselves from the cry of the poor for equality, for education, for knowledge and skills, for employment opportunities, for independence, for autonomy and justice, and for solidarity. When we do not see or hear the cry of the poor, we simply cannot feel with them. Are we inhibiting even one person from realizing the fullness of God’s love and their own humanness? In doing so, are we hindering our own journey towards God and our own ability to experience the fullness of life?”  Beverley Vantomme 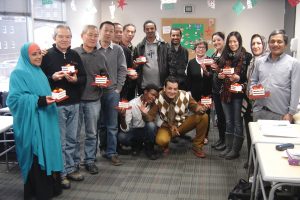 Beverley at Christmastime with her students from Ethiopia, Eritrea, South Korea, China, Congo, Libya, Afghanistan, Iran, Columbia, and Burma who are learning English. Her husband, Ray, made the sleighs that are filled with candy.

We feel a sense of pride that Canada has a Multiculturalism Act that protects all—Canadians and newcomers. The preamble in this act states that every individual is equal before and under the law and has the right to the equal protection and equal benefit of the law without discrimination. Everyone has the right to freedom of conscience, religion, thought, belief, opinion, expression, peaceful assembly, and association. Those rights and freedoms are guaranteed equally to male and female persons. This act is liberating.

Pope Francis writes: “In virtue of their baptism, all members of the People of God have become missionary disciples” (Matthew 28:19). Some of us are called to witness this discipleship in another land and some are called to walk this call in Canada.

I read the following statement on the Scarboro Missions website: “Mission is a passion to make known the love of God that is transforming for all peoples and cultures.” May we all have this passion wherever we are.∞

Beverley and Ray Vantomme were first missioned to Malawi in January 1996, working in health care in collaboration with the St. John of God Hospitaller Brothers in Mzuzu.