The next step in the journey

From a place of restlessness and an inner desire for a new challenge in ministry, when I turned 60 I began to pray the words of the Prophet Jeremiah in earnest, “I know the plans I have in mind for you, plans for peace…” I was confident that the Spirit was working within me and knew my desire for the more in my life. I would have to trust and wait on God.

I began to look at possibilities to serve in an African country and visited the missions of the Sisters of St Joseph of Chambery who were working in Tanzania. It was a six week “come and see” visit. Upon my return to Canada, the attraction to serve in Africa was still present, but as part of my discernment journey I had to complete a training program for people seeking to be volunteers in overseas mission.

With the blessing of my religious community, I began the four-month preparation program at Scarboro Missions along with lay people who were also discerning a call to join Scarboro Missions for a three-year commitment. The program prepared us in various ways to live and work in another culture. We were given tools that we could use in mission when we felt overwhelmed walking in a new culture and learning a new language, as well as ways to deal positively with our own loneliness.

I was missioned to Malawi, to the Diocese of Mzuzu where other Scarboro missionaries served. I had been told that Malawi was known as the Warm Heart of Africa and I was curious as to what that might mean personally as my journey began.

At the end of my comfort zone

My first days in Mzuzu were a blur. I met many people and visited various places where I might choose to do ministry. I found the market and grocery store, arranged to get a phone, and found the shop where I could send emails. Even with all the activity of settling into a new environment, I was feeling sure that this was the place where I was called to be at this moment in my life. Language classes began and I tried to adjust to a very relaxed pace of living, which was indeed a challenge for one who loves activity.

“One goes overseas so as to come back—as an activist, a marginal person, and a perpetual sojourner…It is impossible to unbecome what our overseas experience has helped us to be.”

I met other religious, both sisters and priests, who were working in the diocese of Mzuzu and stood proud when I heard of the legacy left by previous Scarboro lay missionaries. Hospitality is a value among the Malawian people. An invitation to share a meal with a family was a time to meet all of the relatives and neighbours who gathered around the table because the mzungu (white person) was visiting. I was experiencing, firsthand, the warm heart of Africa.

As I spent time meeting people in various places, one of my learnings was that in spite of their personal situation or their daily struggle for survival, they lived from a deep faith and trust in God that all would be well. Nothing was termed bad luck; it was always “God will look after us and we will be fine.” 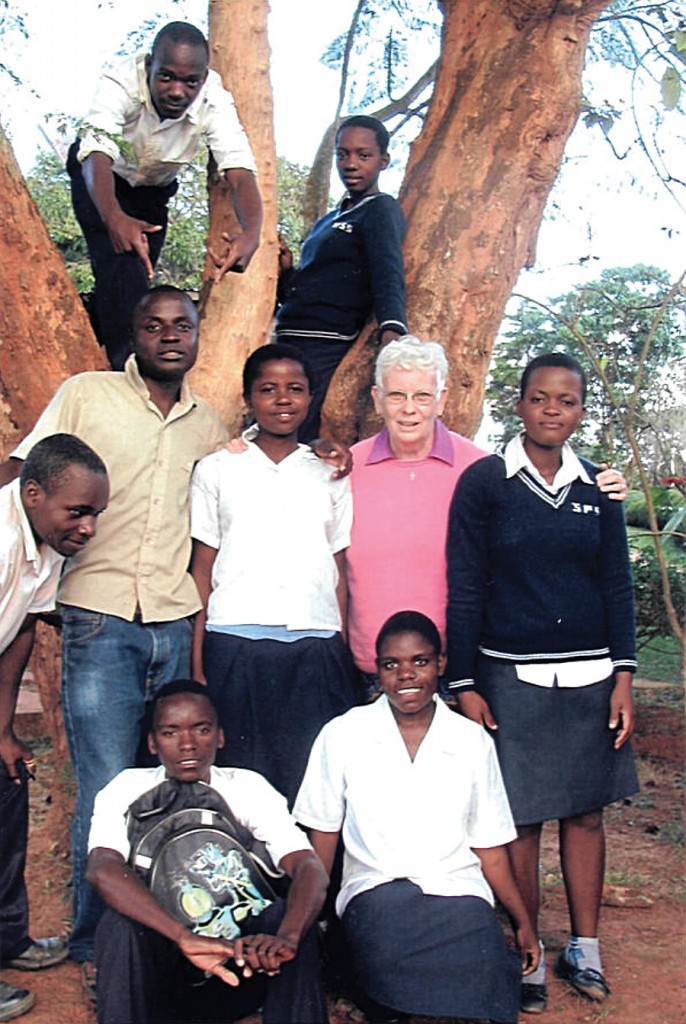 Education for African students comes at a price, as school fees are required at all grade levels. If a family is not able to pay the fees then donors have to be sought, which is often a problem. With the awareness that having an education is a way out of poverty, families make huge sacrifices to find money to send at least one of their children to school. I was often aware of how much we as Canadians take education for granted.

My full time ministry began at St. Peter’s Secondary School and I was asked to teach a life skills class to Grade Nine students. This was a new initiative put forward by the Ministry of Education. I was up for the challenge even though there were no textbooks, teacher guides, or background notes that I could use to create lesson plans. I enjoyed the classroom teaching and learned that kids in Mzuzu have the same hopes and dreams for success as kids in Canada.

One of the needs I saw early on was that a very small space had been designated at the school for a library. The room could hold no more than 15 students at a time, so I began raising money from donors and friends to renovate a good-sized classroom into a library with a computer room attached.

I also began an after-school program to assist students who were sponsored by Scarboro Missions benefactors. Three student tutors were hired and two rooms in my house became classrooms. At times, chairs were set up in the front yard to accommodate everyone who showed up that day. It was wonderful to watch relationships grow between the tutors and the other students as they tried to solve mathematics problems or determine the meaning of the words of a poem. Having role models was helpful for the students as they worked toward their goal of going on to university.

After completing two three-year contracts with Scarboro Missions in Malawi, it was time to return to Canada and find my place again within my community and family. This indeed has been a challenge as I did not want to forget what I had learned and lived during my time in Malawi. It seemed that life in Canada had changed in the time I was away and technology had a hold on young people. Having lived in Malawi, a country where relationships are held with such importance, I was taken off guard by the way that people in Canada relate with their cell phones.

It felt like I was in reverse culture shock, which was at times overwhelming as I looked for a place where I could fit. I was a different person because of the past six years of living with only what I needed in terms of material things. Suddenly I found myself wanting more than was necessary. I think this is part of our North American culture that easily seduces many of us into thinking we really need this or that.

Since my return in 2013, I have attended a workshop for returned missionaries at Scarboro Missions and reflected on one of the handouts we were given at the closing session. In it, the writer Cyril Powles describes our next step in the journey of coming home as “For the sake of others.” For Powles, one goes overseas so as to come back—as an activist, a marginal person, and a perpetual sojourner. These are tough words, yet if we recognize that it is impossible to unbecome what our overseas experience has helped us to be, then the next logical step is to use our experience, skills, and knowledge to become a missionary to our own culture.

Now back in Windsor, I have been volunteering at the refugee office sponsored by the Diocese of London. I now have a house and am able to take the overflow of refugees coming through the diocesan office when the shelter is full. So as of now I have a family of five from Nigeria and a single woman from Ethopia. Being able to meet and accompany many people who are seeking a home here in Canada seemed to be the next logical step in my journey to be with and among God’s people here in my own country.∞