Spirit of Struggle, Spirit of Love

It was early Thursday morning when my half-ton truck hauled into Guariba village on the hot dusty savannah of northern Brazil. Some men were milling around the Church of St. Joseph, the patron saint whose feast day we would be celebrating the following Sunday, March 19. The architecture of the church was unusual. It was constructed in a circular fashion reminiscent of the round houses of the Makushi Indigenous people. 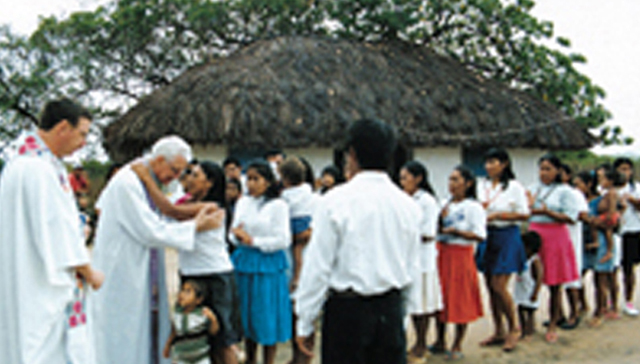 L-R: Scarboro missioner Fr. Ron MacDonnell and Bishop Aldo Mongiano greet villagers who are about to receive the Sacrament of Confirmation in the Makushi Indigenous community of Guariba, Roraima Diocese, Brazil.

“Welcome!” two of the catechists, the local church leaders, said to me. “We’re cleaning out the well. The water’s very dirty, so we’re going to put a cement wall around it.” The men were in fact quite dirty themselves from the work. Several were hauling up buckets of water from the well in the blazing hot sun.

Another man suddenly rode up on his bicycle. He was the tushawa, or village chief, from the next village. He had a live chicken tied to his bike. “Is that lunch?” I asked him.

“Maybe,” he said with a laugh. “Actually, I’m going to visit my sister here. She’s been sick a few weeks. Why don’t you come along with me?”

We went off to a house a little distance from the village centre. His sister was lying in a hammock. It was not known what disease she had. “The pajé (healer) has been praying for her,” her brother told me. “He’s been here all morning and now she’s feeling better.” Indeed, an old man with a very sun-beaten face was crouched by the hammock. He wore a sort of army cap, the only thing that distinguished him from the others.

The people spoke softly in their Makushi language. They asked me questions; the only thing I could say was my name. They switched to Portuguese so I could understand. We chatted for a long while. They told me about the arrival of the white people in their land, which started in earnest in the 1930s. Customs began to change, schools were introduced, outside products like clothing, salt and sugar, and metal tools became common.

Little by little as well, ranchers from central and southern Brazil arrived in the area, setting up fences to raise cattle, usually without the explicit consent of the Makushi who were used as cheap labour on the ranches.

“Some were even branded back then, like cattle,” I was told.

This slow intrusion by white ranchers has generated a land conflict which today is still unresolved. The new Brazilian constitution of 1989 called for the demarcation of traditional Native lands by October 1993. Now, years later, the federal government is reluctant to sign the document which would hand over to the 10,000 Makushi people their traditional land, known as the Raposa-Serra do Sol (Fox-Sun Mountain) area. The 200 ranchers who have infiltrated the area would receive due compensation, but most resist leaving.

The excluded of society

Eventually we headed back to the village centre. One of the catechists invited us over to the school. The children had learned the songs of the Lenten campaign whose theme was “The Excluded of Society: It is you, Lord.” One of the songs mentions the Indigenous people of Brazil, who are among those excluded from mainstream society.

The next few days were busy. Two Consolata Missionary Sisters arrived from Normandia, the parish centre about 70 kilometres away. I myself was living in another village about 20 kilometres away. We held meetings with the people and at night we prayed together.

One evening the Sisters showed slides about Moses and the liberation of God’s people from foreign slavery. Another evening, several children were baptized. We used a dried-out gourd, an araabu, to hold the baptismal water.

On Saturday, Sister Augusta held a meeting with the First Communion preparation class, but it was decided that they needed more preparation. Sister Evilia and I sat down with the 20 young and not-so-young adults who were preparing for the Sacrament of Confirmation. They were really enthusiastic about receiving the gift of the Holy Spirit. “It is a sign to become more committed and involved in our community, and to help our own people more,” one of them said.

At one moment in our reflection, we huddled together in the middle of the church, trying to imagine the fear and sadness which Jesus’ disciples had felt in the Upper Room. Then we raised our arms and reached out to each other, symbolizing the reception of the Holy Spirit, God’s Spirit of fire and light, of courage and love.

On March 19 we awoke to find that St. Joseph had sent us a downpour. We awaited anxiously the arrival of Dom (Bishop) Aldo Mongiano, who was coming from Boa Vista, the seat of Roraima Diocese, about 200 kilometres away. We peered out into the mist, straining to hear any sound of an approaching vehicle.

Finally Bishop Mongiano reached Guariba. Affectionately known as Dom Aldo, he is a saintly man, a veteran of the Italian Consolata Missionaries. He spent 18 years as bishop in Mozambique and was celebrating his 20th anniversary as bishop of Roraima Diocese. This white-haired bishop with a big heart has taken a strong stand for Indigenous rights and for other poor and marginalized groups. As a bishop who accepted a theology of liberation, he has suffered harsh criticism by the local political and ranching elite.

Dom Aldo’s arrival coincided with the end of the rain and our celebration began. After a small procession around the village centre during which catechists gave reflections in Makushi and Portuguese, we entered the church and celebrated Mass and the Confirmation of the 20 adults. It was a very intense and special moment. As each person received the bishop’s blessing, the whole church was silent, even the children were absorbed in the event. God’s Spirit was indeed present among us.

Following the celebration we all enjoyed a lunch of barbecued meat—a steer killed the day before. We sat around chatting. Photos were taken by one of the Sisters. I felt especially honoured because I had been asked to serve as godfather for one of the confirmed. The sun blazed hot and intense, as though the Holy Spirit had burned away any sign of rain.

Little by little people started leaving. I headed back to Fox Leg Village with some of the local catechists. As I left, I thought about St. Joseph, that carpenter from Nazareth. He was a builder of houses. The people in his community of Guariba are builders of justice, struggling to regain their land, to construct communities of love and sharing. Our time together during the feast had indeed been a confirmation of this vocation: to receive God’s Spirit of fire and love, and to build the Reign of God.

Today the Makushi people continue the struggle for their land. Bishop Mongiano retired in 1997, replaced by Bishop José Apparecido Dias of the Divine Word Order. Scarboro missioner Fr. Ron MacDonnell, who began working in Roraima Diocese in 1995, is currently finishing studies in linguistics before returning to the Makushi.