In the early 1980s the civil war between the military regime of Philippine President Ferdinand Marcos and the rebel forces known as the New People’s Army (NPA) was at its height. Most villages had informers, some for the military and some for the rebels. If discovered, informers were killed by the opposing side. 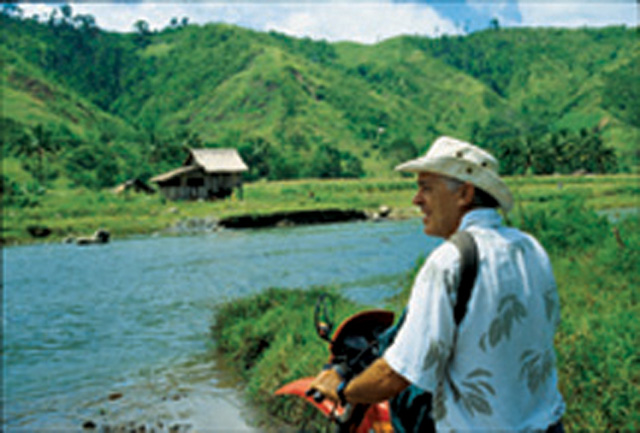 Scarboro missionary Fr. Charlie Gervais making his way around the parish on the island of Mindanao, Philippines. Fr. Gervais left the Philippines in 1992 to serve in Canada.

In November, 1981, a man by the name of Andres Flores was killed by four rebel gunmen who broke into his house after dark. He was an informer for the military in the town of Malambago, Bukidnon Province, on the island of Mindanao. I was the parish priest there at the time. Andres had a son, Toto Flores, who was in the military. When he heard of his father’s murder, he vowed to get revenge.

There was a military commander who owned a piece of land near Malambago, but he had been re-assigned to Halapitan, a town further to the south. In his absence, he put a member of the Civil Home Defense Force (part of the military) as a tenant to work the land. The deal was that they would share the yield.

The tenant was a gambler and a drinker. One night, when he had had too much to drink, he shot himself in the foot with his own gun. With his injury, he could not work the land for a while, so the owner used this as an opportunity to replace him with the Gonzales family who were good workers.

Not happy with that, the former tenant often asked the Gonzales family for part of their share. They did this for a while but then stopped. In anger, the man reported to the military that one of the children, 18-year-old Elizabeth, was a message runner for the rebels in the hills. Elizabeth was one of my catechists in the parish. She was picked up and thrown in jail.

I argued with the local commander that it was not safe for Elizabeth to be in the barracks with the soldiers at night as they drank a lot. I signed for her custody and put her with relatives in town. The next day, with Elizabeth on the back of my motorcycle, we went to the capital, Malaybalay, to get her a lawyer who managed to get her released. A date for a formal hearing of her case was set and Elizabeth was free to go home.

Then Toto Flores arrived in Halapitan and asked if the local military and police knew of a rebel he could kill in revenge for his father. They gave him Elizabeth’s name. He organized the local police and military defense force—there were 16 of them—and by cover of night on February 1, 1983, they went to Malambago, about 10 kilometres away.

There was a village councilman who had agreed to defend Elizabeth at the hearing. His house was next door to hers, about 50 metres away. Elizabeth was at home looking after her two brothers and a sister, aged 12, 10, and eight years old. Her parents were a few kilometres away, staying overnight at the farm on which they had been hired to work.

Around eight o’clock, Elizabeth was putting her youngest brother to bed. Holding a kerosene lamp, she reached up for a pillow on a shelf and was clearly visible through the cracks of the bamboo wall from the darkness outside. Toto Flores approached the house and shot Elizabeth through the heart. Her last words were “Hapa! Hapa!” (Lay flat! Lay flat!) as she threw herself on top of her brother. She died protecting him with her body.

Toto’s shot was the signal for the others to start firing. The councilman was having his supper on his small veranda. They riddled him with bullets, then fired on both houses. Elizabeth and the councilman died, as well as a 15-year-old boy who was visiting at the councilman’s house. Three others were wounded, one seriously. Elizabeth’s three siblings survived.

The military returned to Halapitan that night and got drunk. They reported that the rebels had committed the massacre. Early the next morning I went around investigating and documenting the incident. I had all sorts of witnesses to the truth. I was out all day talking with the people.

When I got back home that evening, I was tired, wet, cold, hungry, alone, and very angry at this grave injustice. As the rain clamoured on the roof of the rectory, I paced back and forth like a tiger in a cage. Every now and then I roared with rage.

Since I had nobody to talk to, in desperation, I picked up the Bible, slammed it on the table and shouted, “God, talk to me!” As I looked down, the Bible had fallen open at Psalm 37. So I read:

“Do no fret because of the wicked;
do not be envious of wrongdoers
for they will soon fade like the grass,
and wither like the green herb.

Trust in the Lord, and do good;
so you will live in the land,
and enjoy security.
Take delight in the Lord,
and God will give you the desires
of your heart.

Commit your way to the Lord;
trust in God, and God will act.
The Lord will make your vindication
shine like the light;
and the justice of your cause
like the noonday.

Be still before the Lord, and wait patiently;
do not fret over those who
prosper in their way,
over those who carry out evil devices.

Refrain from anger, and forsake wrath.
Do not fret—it only leads to evil...
For the Lord loves justice;
God will not forsake the faithful ones.”

I cried, I laughed, then I felt a deep peace, like the eye of a storm. I felt that God was hugging me.

It was at this point of my desperation, on that night of February 2, 1983, that Jesus let me experience his intimacy in my pain, and his solidarity with all the oppressed poor in the world. He taught me that things would eventually be righted and that justice would prevail.