A work of the Spirit

Stop knocking your head against a brick wall,” was the advice I was increasingly receiving from fellow priests and pastoral agents of the diocese. “You can’t win this case. The law favors the municipality’s position over that of the seminary.” 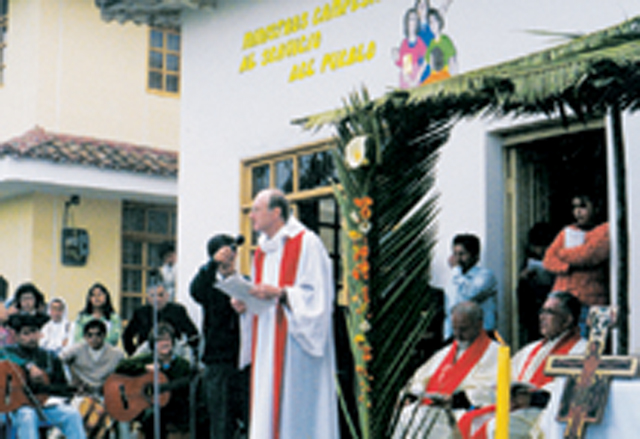 Scarboro missionary Fr. Frank Hegel, director of Christ the Good Shepherd Seminary, at the offical blessing of the seminary, April 1999, once the new wing was completed in the Town of chambo, in the Diocese of Riobamba, Ecuador

“You’ve given it your best shot,” counseled Tom, the bishop’s secretary and a good friend, seeing the strain the 40-day expropriation battle was having on my already delicate health. “Accept the inevitable and move on from there.”

My head said they were all correct in their assessments, but my heart just couldn’t accept it. Memories of the many struggles, efforts, sacrifices and energies that had been expended by the seminarians just wouldn’t allow me to do that. There was the original six-month effort to put together a plan for a seminary. Then there was the year-long struggle to convert a derelict hacienda into an appropriate living and learning environment. Was all of that for naught?

The moment we learned of the order to expropriate the land on which the seminary is located, we began to act. The seminarians, along with myself and the Sisters in the parish, wrote letters and met regularly with the mayor and his councilors, both together and individually. We emphasized the importance of the seminary not only to the Church but to the local community.

When the municipality’s resolve to execute the expropriation order did not weaken, we followed the bishop’s advice to mobilize local neighborhoods in support of the seminary. A shocked public eventually became aware of the expropriation order, which up to the moment had been kept relatively quiet. After all, this drama was unfolding during a busy pre-Christmas season that was naturally preoccupying the majority of the people.

Petitions were circulated and sent to the municipality showing considerable community support for the seminary’s position. Despite it all, the outcome for the seminary looked bleak. The bishop was executing his last legal recourse—an appeal to the ministry of government asking it to overturn the municipality’s order, an action that various local jurists had warned me in advance would not likely be successful.

THE MOMENT WE LEARNED OF THE ORDER TO EXPROPRIATE THE LAND ON WHICH THE SEMINARY IS LOCATED, WE BEGAN TO ACT

On Monday, January 12, 1998, while on a visit to the home of Julia Duarte, a Scarboro lay missioner also working here in Ecuador, I mentioned that we feared the worst. She encouraged me not to give up hope and reminded me that the Holy Spirit was working somehow in this situation. I left thanking her for her support.

The next morning, as we celebrated Mass, the doorbell rang at the very moment of the consecration. It was the secretary of the municipal council who had come to deliver an urgent, official letter inviting us to a special council meeting that afternoon. There the issue of the expropriation would be definitively resolved.

Over a shared breakfast we all strategized as to what last efforts we could make before the meeting. We decided to fan out among the various neighborhoods to inform them of the meeting and to encourage them to be present and to express their views publicly. Posters with biblical phrases advocating justice were hastily put together and displayed in various parts of the town. Someone had to inform the bishop and other supporters of the impending meeting. Time was short. There was a lot to do.

In the midst of this flurry of activity, Julia, along with another pastoral agent, Julia Serrano, appeared at our door. They were working on a document commissioned by the bishop and due in his office by noon. However, Julia felt impelled to make a visit of solidarity to the seminary and encouraged the other Julia to join her, which she did. The various activities occurring at the time of their arrival only gave us a chance to explain briefly what was happening. Their disappearance from the scene was not noticed until we all met again at lunch and I asked what had happened to the “two Julias” as they were known. No one seemed to know.

At 1 p.m., an hour before the scheduled council meeting, the two Julias returned. In hand were copies of various laws governing local and national government actions. They had gone to seek legal advice from various friends on other municipal councils. I reluctantly informed them of the contrary legal advice I had been given by other jurists. They didn’t seem worried. They had also obtained a microphone and speaker that they wired to the battery of the truck they were driving. The vehicle quickly filled with volunteers who went through the town inviting the public to the meeting.

The “two Julias” mentioned in this article are Scarboro lay missioner Julia Duarte (second from left) and Julia Serrano (far right). The others are Stella Gutierrez, a Colombian theologian, Perez Esquivel and Rigoberta Menchu, both Nobel Prize recipients. Taken at the gathering of bishops, pastoral agents and friends of Bishop Leonidas Proano at the tenth anniversary of his death, Riobamba, Ecuador, 1998.

The council chambers were packed. People were standing in the hallway outside, anxious to hear the proceedings. The mayor opened the meeting with an invitation to those in attendance to present their sides of the arguments in a free and respectful manner. He assured everyone that whoever wished to speak would be heard and that at the conclusion the council would make a formal decision on the issue in open session.

The atmosphere was tense. First to speak was the director of the elementary school on whose behalf the municipality had issued the expropriation order against the seminary property. Other interventions followed. Most were in favor of the seminary. However, no arguments were being put forward that hadn’t already been heard by the municipal authorities. The dialogue continued in an orderly fashion.

Eventually, Julia Duarte raised her hand to speak. She rose from her chair with an air of complete serenity and assurance. She introduced herself as an Ecuadorian; a mother of four children whom she was educating; a certified teacher known to many of the teachers present and knowledgeable in the current education law of the country; and a professor at the seminary.

Julia then began systematically reviewing the elements of the expropriation issue as presented, cutting down each argument that had been put forth with a logic that a thousand hours of preparation could not have produced.

As she continued to speak a pall of silence covered the room. Her tone was at once respectful but authoritative. Mouths fell open in awe, including my own. Not only did she demolish the arguments for the expropriation; she proposed viable alternative solutions that the elementary school could pursue in conjunction with the municipal council that would address the needs of that institution without prejudicing the seminary.

The importance of the seminary

Finally, she stressed the importance of the seminary to the Church in the province and to the town itself. She concluded with an invitation to reflection on the part of the municipal council that she herself does not remember saying but which is etched in my memory because of its apparent audacity: “I know of that which I speak for I speak with authority.” Her intervention was met with a thunderous applause that lasted several minutes.

AS SHE CONTINUED TO SPEAK A PALL OF SILENCE COVERED THE ROOM. HER TONE WAS AT ONCE RESPECTFUL BUT AUTHORITATIVE. MOUTHS FELL OPEN IN AWE.

Immediately following, a teacher from the elementary school acknowledged the value of Julia’s intervention and suggested that the school accept one of the alternatives Julia had proposed. An astute mayor took that cue as an opportunity to formally offer the school the alternative mentioned. The school indicated their agreement. Within five minutes the council, meeting in session, rescinded the expropriation order against the seminary and moved and carried a motion that met the requirements of the school as well. Our 40-day ordeal had come to an end.

How does one recognize the action of the Spirit working among us today? The People of God instinctively know. From the time the people left the meeting, and for months after, they continually referred to Julia’s intervention as being inspired by the Holy Spirit. There could be no other explanation for it. Who inspired Julia to abandon that urgent work the bishop had asked her to complete that morning in order to make a visit of solidarity to the seminary? Who gave her such serenity and confidence? Whose words was she speaking with such irrefutable logic, respect and authority? How would she have known of all the alternative, viable options open to the municipal council?

The answer lies in my comment to the bishop who called me later in the day to congratulate me on the outcome of the meeting. “I’m sorry bishop,” I said. “I had nothing to do with the outcome of today’s meeting. It was the sole work of Julia Duarte who was open to allowing the Holy Spirit to work through her. Don’t thank me. Thank her. She is the instrument that the Holy Spirit chose to save the seminary property.”