Catholic social teaching speaks on the threat to water, necessary for all life

In all religious traditions, water is a sign of the revitalizing presence of the Divine. We associate water with springs, with rivers, with oceans, with rain that gives life to the Earth so that it can provide us with sustenance, happiness, purity-ultimately, with blessing. Francis of Assisi, in profound communion with this spirit of the people wrote, "All praise be yours, my Lord, through Sister Water, so useful, lowly, precious, and pure" (Canticle of the Sun). 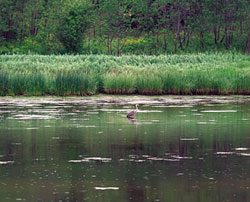 The presence of water in the biblical world is important because in that region water was a scarce resource and therefore very valuable. The promised land is land that pours forth milk and honey; it is fertile land that offers its fruits as a blessing for the life of the people.

In the Exodus story, water protects the people, opening a path for them to escape, but the same waters with their fury, will be the grave of the people's oppressors. Perhaps for this reason, Apocalypse tells us that in the new heaven there will be no sea that sows death and destruction, but, instead, a river of living water that flows from the throne of God and of the Lamb (Revelations 22:1).

"There are collective and qualitative needs which cannot be satisfied by market mechanisms. These mechanisms carry the risk of an 'idolatry' of the market, an idolatry which ignores the existence of goods which by their nature are not and cannot be mere commodities."

Water is linked to all dimensions of life. Life emerges from the water and water allows the development of all beings. Today, in this moment of development, human beings are exhausting the sources of water and the possibility of maintaining and renewing this resource, fundamental for the life of the planet. We need to look at the economic structure that governs us to understand the threat to water. We also need to look to our faith traditions, including Catholic social teaching, to know how to deal with this threat.

The logic of profit

Our dominant economic system, which we know as neoliberalism, is fundamentally directed by the logic of the market, the logic of profit, the assumption of immediate gain. From there, an economic program that prioritizes the privatization of basic goods and services (including water) is imposed in the name of "efficiency".

However, one of the most dramatic results of these measures is the rising cost of services, which will affect the poor sectors of the population. The questions we must ask are: How will the lives of the poor be affected? Who will assume the human cost of these measures?

"Working for the common good requires us to promote the flourishing of all human life and all of God's creation... Our obligations to the one human family stretch across space and time. They tie us to the poor in our midst and across the globe, as well as to future generations."

Catholic social thought teaches that we cannot separate ethics from the economy. In the case of water, what takes precedence is respect for creation, care of others, solidarity in human relations, and the common good-the foundation of all political order. It is very useful to examine these teachings and apply them to water privatization. (See highlighted quotes from Catholic Social Teaching.) The principle of respecting creation is also a particularly instructive teaching when considering the issue of water.

For environmental organizations, the greatest ecological problem at present is the deterioration of fresh water ecosystems and the consequent decrease in the species that inhabit these ecosystems. This raises the issue of sustainability-meeting the needs of today in a way that does not compromise the ability to sustain life in the future. The United Nations has expressed its concern about sustainability in a series of conferences on the theme. As well, the issue of water has been present at all UN summits on the environment. There is awareness that if nothing is done soon, many important water sources will be lost. The numbers are alarming:

The ever-increasing competition for this basic resource affects principally the poor, and above all the women and girls who walk long distances in search of water.

This reality is made worse by armed conflicts. The United States' interest in the important oil resources of Iraq is known. But it is not only the war in the Middle East that threatens the planet's resources and contaminates our environment:

".One cannot use with impunity the different categories of beings, whether living or inanimate, animals, plants, the natural elements, simply as one wishes, according to one's own economic needs. On the contrary, one must take into account the nature of each being and of its mutual connection in an ordered system, which is precisely the 'cosmos'."

"Today, any form of war on a global scale would lead to incalculable ecological damage. But even local or regional wars, however limited, not only destroy human life and social structures, but also damage the land, ruining crops and vegetation as well as poisoning the soil and water." (Pope John Paul II, Message for Peace, 1990)

The big question is: Are the world's political, economic and financial leaders willing to pay the price of a different development, a truly human development, with a sustainable use of the goods and services that nature provides us? Without sustainable use, nature will deteriorate and without nature, humanity cannot survive. In this moment of world history, we not only have to listen to the clamour of the poor for bread and dignity, but we also have to hear the cry of the Earth. At an accelerated rate, it is losing its capacity to feed and care for all life.

Laura Vargas is director of the Peruvian Catholic Bishops' social action commission. This article was translated by Armella Sonntag, a former Scarboro lay missioner. Armella does Spanish to English translation and can be reached at languagelink@sasktel.net.