THE FOUNTAIN OF LIFE

Brazilian bishops encourage reflection and action on the value of water

I well remember my first boat trip down the Amazon River. Sitting on the prow of the 14-metre boat, in front of the boatman at the steering wheel, I gazed at the immense body of churning water, made muddy from the silt of the Andes Mountains. The Amazon was several kilometres wide and seemed more like a huge lake. Awestruck by the beauty of God's creation, I opened my bible to Psalm 8. The words of the psalmist resonated with me; I indeed felt like a very small part of God's creation. 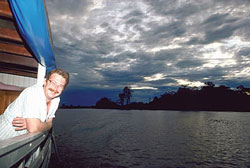 Scarboro missioner Fr. Ron MacDonell travelling on the Amazon River. Fr. Ron first went to Brazil in 1986. He does pastoral work among indigenous peoples and through his linguistic training is helping them to preserve their language and culture.

However, this humbling yet exhilarating first experience of traveling on the Amazon changed on that same boat trip. We had to drink filtered water because the Amazon waters are polluted. In fact, during my six years of mission work in the Prelacy of Itacoatiara with the people of the riverside communities, I learned a lot about water problems.

The most immediate concern was the lack of access to potable water, particularly during the cholera scare of the early 1990s. Another problem was the overfishing of the lakes. Fishermen with trawlers from the big city would dragnet the smaller lakes to earn easy profit on the fish market, leaving the small communities without a fish supply. Part of our work as Church was to address these concerns and accompany the communities as they organized to defend their fishing rights.

Currently, I work among the Makuxi (ma-koo-SHEE) native people on the dusty northern plains of the Diocese of Roraima where Brazil borders Guyana. Here, too, water is a huge concern, but unlike the Amazon area, there is little water readily available. Communities must dig deep to find the water table. In one Makuxi village I visited last year, I listened to the leaders complain that they must walk one kilometre to a small stream to get water. They voiced their frustration-despite years of petitioning government agencies, they had not yet received aid to dig wells and set up a water system.

Much more serious is the problem faced by another Makuxi community. In our Advent visit to the village, we learned that the dozen families are surrounded by a rice-grower who invaded the neighbouring land a few years ago to set up his plantation. In order to make the land more productive, the rice-grower spread chemical fertilizer on the fields. Fertilizer seeped into the water system, including the creek used by the community for washing clothes and bathing. The people, particularly the children, soon developed skin rashes and intestinal diseases from the polluted waters.

When the community leaders complained to the rice-grower, he built ditches around the fields to contain chemical water run-off. However, during the rainy season, the ditches flooded and contaminated waters entered the creek. The community's troubles continue despite complaints to government authorities.

Because of situations such as these, the National Conference of Brazilian Bishops chose "Water, the Fountain of Life" as the theme of its Lenten Campaign for 2004. Starting in Lent and continuing throughout this year, church communities are studying the issue of water in Brazil using a process called "See, Judge, Act".

Pope John Paul II: Water is a right of all

"Water is a vital element essential to survival; thus, everyone has a right to it. Attention must be paid to the problems that derive from its scarcity, which is evident not only in Brazil but also in many parts of the world. Water is not an unlimited resource. Its rational use in solidarity demands the collaboration of all people of good will with government institutions so as to ensure the effective protection of the environment, understood as a gift from God."

Pope John Paul II's message to Cardinal Agnelo, chair of the National Conference of Brazilian Bishops, in response to their 2004 Lenten Campaign, "Water: Source of Life"

First, we "see" the water situation. We have been studying the necessity of water for all life, analyzing its uses and abuses, and investigating current legislation in Brazil regarding water resources. For example, while Brazil has 12% of the world's fresh water, 60% of Brazilians (over 105 million people) do not have access to safe drinking water. As the saying goes, "there is something wrong with this picture."

Next, we "judge" what we see. From the perspective of both native people's spirituality and the Christian tradition, we are learning to appreciate the value of water in our lives. For the Brazilian native peoples, water is profoundly sacred. In many native traditions, human beings were made out of water. They left the water for dry land in order to take care of nature. Other native traditions consider water as the linking point between Heaven and Earth.

The Christian tradition is also rich in water symbolism. The Garden of Eden was surrounded by nourishing rivers. At God's command Moses drew water from the rock to satiate the people's thirst in the desert. The prophet Ezekiel speaks of the cleansing water which spiritually renews God's people. Jesus, the Son of God, is the Living Water, the Fountain of Life, who satisfies our spiritual thirst. Jesus offered spiritual water to the Samaritan woman at the well. He called forth fishermen who worked on the waters to be his disciples and he calmed the many storms they encountered on the lakes. At the crucifixion, his side pierced by a soldier's sword draws forth water as well as blood.

Our Christian discipleship calls us to responsibility for God's creation, including stewardship of water resources. Here the "act" part of the Lenten Campaign comes into play, encouraging faith communities to highlight water as part of liturgical celebrations. We are also urged to act locally to improve water rights: organizing the building of wells for rural communities, combatting pollution, and pressuring politicians in the urban centres for basic clean water conditions. The Lenten Campaign study booklet provides a survey to assist communities in identifying pertinent actions.

The "See, Judge, Act" process leads us to analyze the situation of water use, evaluate it according to religious values, and then act as faithful stewards to preserve water, the fountain of life, and share it with all.

Finally, new songs for the Lenten Campaign focus on the theme of water. The refrain of the communion song is especially evocative:

"We are thirsty,
O Lord of salvation;
Give us water
Of justice and conversion."

Jesus is the Son of God who quenches our spiritual thirst. He is also the One who calls us to conversion, to hear the voices of so many sisters and brothers whose thirst is concrete. They thirst for water rights, for land rights, for just wages, for human dignity. As we become more aware of our world's limited water resources, let us become more active in protecting them. When next we are near waters, whether the Amazon or the St. Lawrence Rivers; the Pacific, the Atlantic or the Arctic Oceans; or near the many small streams, creeks and lakes, let us imitate the humility of the Psalmist and see our rightful place in creation: small creatures called to wonder at and protect the beauty and the fragility of the world with which God has gifted us.