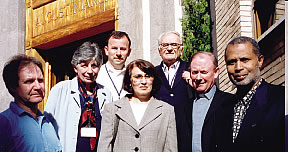 Paul McKenna(left) of the Scarboro Missions Interfaith Desk with Muslim and Catholic scholars and specialists at an international conference on Muslim-Christian relations. Rome 2003

It is time to uncover the best-kept secret on the planet. All over the world, Catholics at all levels of the Church are engaging in creative dialogue with people of other religions. And dialogue with Islam is a big part of this international interfaith conversation. After 13 centuries of bad history between these two traditions, the good news is that Catholics and Muslims are now in conversation.

Did you know that Muslims and Catholics together form one-third of the world's population, and that Muslims and Christians form almost one-half? Did you know that Pope John Paul II has forged dramatic new bonds with Muslims worldwide? Since 1978, he has met with or addressed Muslim audiences more than 150 times. In 1998, he supported the creation of the Muslim-Catholic Dialogue Commission. Established by Vatican and Muslim officials, this commission is the first permanent official channel for discussion between the two religions.

In 2003, I attended an international conference in Rome on Muslim-Christian dialogue. The gathering was sponsored by SEDOS, a Rome-based forum that supports Catholic religious orders worldwide in their commitment to global mission. The conference attracted priests and nuns from a multitude of religious orders; many had lived or worked in countries with large Muslim populations.

I was left wondering why today's media keeps us in the dark about this good news of dialogue.

Throughout the world, Muslims and Christians are engaging in dramatic new models of conversation and cooperation at the levels of the theological, the spiritual, the interpersonal, the grassroots and the institutional. Together they are cooperating in the fields of social justice, language, diplomacy, culture, human rights, global peace and international relations.

And so the conference treated me to a panorama of international cooperation between the world's two largest religions. What a profound experience of hope for the future. I was left wondering why today's media expends a good deal of ink informing us only about Muslim-Christian tensions around the world. Why is the media keeping us in the dark about the good news of Muslim-Christian cooperation? This is a story that speaks to at least 50 percent of the world's population.

While in Rome I visited the offices of the Pontifical Council for Inter-religious Dialogue, one of the Vatican's chief instruments for promoting dialogue with other faiths on an international scale. Interfaith conversations are blossoming here at the official level of the Church. It was encouraging to witness the work and advances taking place in the areas of Buddhist-Catholic dialogue, Hindu-Catholic dialogue, Jewish-Catholic dialogue and Muslim-Catholic dialogue.

During my stay in Rome, I also had ample opportunity to share the interfaith work and vision of Scarboro Missions. A number of people informed me as to how the Scarboro Missions Golden Rule poster is being used in various parts of the world including Pakistan and Africa where incidents of Muslim-Christian conflict continue.

For information on the Pontifical Council for Inter-religious Dialogue, visit: www.vatican.va/roman_curia/pontifical_councils/interelg/

Paul McKenna is on staff at the Scarboro Missions Interfaith Desk