Make Poverty History is part of a global call to action against poverty. The Canadian campaign is one of 70 national campaigns around the world. But our campaign here in Canada is a bit different from others. In addition to the three key demands we're making of our political leaders we've added a fourth: End child poverty in Canada. We are calling on government to raise the annual Canada Child Tax Benefit (and equivalent Quebec benefit) to $4,900/year and ensure that all low-income children receive the full benefit; and involve Aboriginal People, women, minorities and youth in developing a domestic poverty reduction strategy. 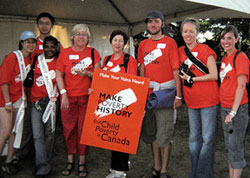 Child poverty activist Lauel Rothman (centre with placard), Coordinator of Campaign 2000, with other volunteers at the July 2005 Live 8 concert in Barrie, Ontario.

Domestic anti-poverty groups have been active in the design and development of the Canadian Make Poverty History campaign to ensure that Canadians and our elected representatives do not forget about poverty right here in our own backyard. At international meetings of the campaign we hear that other countries are impressed by Canada's decision to link the international and domestic demand to end poverty. And a number of other country campaign leaders have indicated that they wish they had done the same.

According to Campaign 2000's most recent Report Card on Child Poverty in Canada, there are 1.2 million children and youth living below the poverty line. That's a poverty rate of 17%, stalled at that level since 2000 despite strong economic growth in Canada. Poverty rates are significantly higher for certain social groups: 49% for children in families of recent immigrants, 40% for off-reserve Aboriginal children, 33% for visible minority children, and 28% for children with disabilities.

We know that the experience of poverty in a developing country is not the same as it is here. But Canada is one of the richest countries in the world. It is wrong and unacceptable that almost one in every six children here is growing up in poverty.

By linking the issue of international poverty to poverty at home, the Make Poverty History campaign has been able to develop a much broader network of organizations and support for the key demands from across the country. It has also fostered new working relationships in communities between Campaign 2000 local partners and the local branches of international development organizations such as Crossroads International, Oxfam, World Vision, and the Canadian Council for International Cooperation. For example, during the summer of 2005 we partnered on a campaign calling on people to lobby their Member of Parliament. The purpose of this action was to raise awareness about poverty issues and call for political support for the four demands of the Make Poverty History campaign.

Partnership with the Make Poverty History campaign has been a good forum for Campaign 2000 to increase public awareness of the extent of child poverty in Canada. We have also been able to advocate for public policy changes that will make a difference:

With more than 250,000 Canadians signing on to the campaign and indicating their support for the four demands, we have been able to strengthen the voice and the breadth of the call across the country to "Make Poverty History" and "End Child Poverty in Canada".

Jacquie Maund is the coordinator of Ontario Campaign 2000.

Campaign 2000, a cross-Canada public education movement, works to build Canadian awareness and support for the 1989 all-party House of Commons resolution to end child poverty in Canada by the year 2000. We began in 1991 out of concern for the lack of government progress in addressing child poverty. Campaign 2000 is non-partisan in urging all Canadian elected officials to keep their promise to Canada's children.

Who is involved with Campaign 2000?

Increase public awareness of the levels and consequences of child/family poverty by publishing research on the indicators of child poverty and developing public education resources. One example is the annual national Report Card on Child Poverty in Canada. Many of our partners also produce provincial report cards. See www.campaign2000.ca for the latest copy.

Build on the deep public concern for this issue by engaging local communities to examine child poverty and children's well-being through presentations, displays, forums, and our publications.

Advance doable public policy solutions and insist on federal and provincial leadership in income, services, housing, and labour market security for families and children with wide consultation from our partner base.

For more information on what you can do, or to be added to our list serve for regular updates, visit www.campaign2000.ca, and contact Jacquie Maund, Coordinator, Ontario Campaign 2000; Tel: 416-595-9230, Ext. 241; Email: jacquiema@fsatoronto.com.