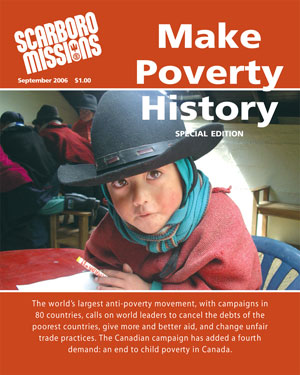 COVER: At school in Ecuador where Scarboro missioners have been present since 1993 in the Diocese of Riobamba, involved in parish work, health care, women's issues and the support of Indigenous groups. Credit: Jack Lynch, S.F.M.

Our sincere thanks to Joe Gunn for his collaboration in producing this special edition of Scarboro Missions. Joe provided the material, helping us to share this global campaign with you. Joe grew up in Toronto less than two miles from Scarboro Missions' central-house and has many friends among the Scarboro priests and lay missioners. For the first seven months of 2006, Joe was the Campaign Coordinator for Make Poverty History. Formerly, he served as Director of the Office of Justice, Peace and Missions for the Candian Conference of Catholic Bishops. He lives in Ottawa with Suzanne Doerge and their 14 year old twins, Daniela and Benjamin.