In the year 2000, almost 200 heads of state, including Canada's Prime Minister Jean Chrétien, agreed to reach eight development goals by the target date of 2015:

The wealthy nations of the G8 were seen to be key actors in providing global leadership, not to mention financing, to ensure that the MDGs were met. Only the last goal, promising a global partnership for development, was directed to the rich nations, but this promise alone held no concrete targets and airtight benchmarks. Around the world, civil society actors knew they would have to pressure the rich to keep their promises, or the need for a doubling of resources for international development would never materialize. Who would keep the heat on northern governments to achieve the goal of directing 0.7% of their gross national incomes to overseas development? 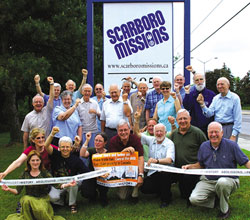 This past summer, Scarboro missioners and staff living and serving in Canada received an update on the Make Poverty History campaign by Campaign Coordinator, Joe Gunn. Scarboro Missions has fully supported the platform demands, as they are consistent with Scarboro's mission priorities

When asked, Canadians are definitely in favour of changing a reality where 291 million Africans live on less than a dollar a day. We all want to change the kind of society where more than 130,000 Africans die every week from preventable causes, while Sub-Saharan African countries continue to pay more than US$12 billion a year servicing onerous debts. Canadians want to do what is right, and realize that we now have the means to eradicate poverty – but few know how we can actually do so.

During the most recent federal election, Make Poverty History supporters got political. More than 215,000 Canadians had signed on to the Make Poverty History campaign at www.makepovertyhistory.ca and received constant updates and information. In massive email campaigns and all-candidates meetings they contacted their local candidates of all five major parties. They asked them to pledge their commitment, if elected, to the four Make Poverty History goals.

By mid-January 2006, the website announced the names of some 987 candidates who had officially endorsed the platform. That number included more than 60 Conservatives, as well as all candidates of the Green, NDP and Liberal parties.

On election night, January 23, 2006, among the 308 persons elected to Parliament were a total of 178 Members who had already supported the Make Poverty History goals. This majority in the new House includes six Bloc Québécois, 40 Conservative, 29 NDP and 103 Liberal Members of Parliament.

Now the challenge is to hold the politicians to their promises. In particular, we need to change our country's aid policy, given that we have yet to commit to the 0.7% of Gross National Income target set by Lester Pearson in 1969 and reiterated by Jean Chrétien in 2000, Paul Martin in 2004 and Stephen Harper (while Opposition Leader) in 2005.

A country that has accumulated more than $63 billion in surpluses over the past nine years, and given us tens of billions more in tax breaks, and where every political party has stated its commitment to this level of aid, still hesitates to act.

The new federal government's Speech From the Throne did not even include the word "poverty." After Mr. Harper's first budget, Canada's commitment to overseas aid remains less than half of the promised 0.7%. The Conservative election platform, which promised more generous increases in development assistance than the previous Liberal government, has yet to be acted upon.

Make Poverty History recognized three key dates for action in 2006. On the late June anniversary of the 2005 Live 8 concerts, a press conference was held at Toronto's City Hall where Mayor David Miller and Steven Page of the Barenaked Ladies encouraged people to hold the G8 to their promises. In Ottawa, as well as in several other G8 capitals, supporters organized "send-off" stunts for the heads of state who would travel to the G8 meeting in St. Petersburg, Russia, in mid-July. The message on large yellow "Post-It Notes" stuck to the wall of Langevin Block, home of the Prime Minister's Office, read, "Stephen, keep your promise to Make Poverty History" and "Stephen, keep poverty on the G8 agenda."

When Toronto hosted the XVI International AIDS conference in August, Make Poverty History was present. There is a clear connection between poverty and HIV/AIDS. A commitment to debt relief for the poorest countries, especially in Africa, increasing the number of trained health professionals, caring for AIDS orphans, as well as action on making necessary medicines more accessible and affordable, is crucial.

Around the world, the Global Call for Action Against Poverty has chosen September 16 to October 17 as global White Band Days – the main period for action. September 16 marks the opening day of meetings of the World Bank and International Monetary Fund in Singapore. These institutions drive many of the policies that have enormous impacts on developing nations, for good and for bad. And October 17 is the United Nations' International Day for the Eradication of Poverty. Last year in Canada more than 50 communities marked this day with Make Poverty History events, including 35 on Canadian campuses.

You might think that you would have heard the moral message to end poverty as loudly from the pulpit as from U2 lead singer Bono. You might have expected all Catholic organizations, parishes and dioceses to undertake lobbying and advocacy campaigns to impress upon the government to act. Make Poverty History took up the task and many Catholic schools and religious orders did so as well. The stories in this magazine are a testament to their commitment, leadership and faithfulness to the Gospel.

When speaking to President Bush and congressional leaders at the February 2006 National Prayer Breakfast on Capitol Hill, Bono referred to the Millennium Development Goals as "the Beatitudes for a Globalized World." Do we know this contemporary Gospel?