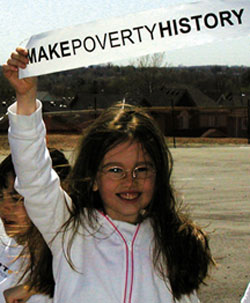 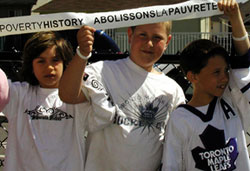 On Wednesday, April 26, St. Joseph's School in Oshawa had their own Make Poverty History campaign. We eagerly prepared for this day. In February, we had a kickoff assembly where students outlined the importance of this campaign and handed out the order form to purchase the white wristbands, symbol of the campaign. St. Joseph students were eager to purchase the white bands.

As the orders for wristbands came rolling in, each class learned how they can make a difference by voicing their opinions about global poverty. The primary students made a banner that called for education for all children around the world and sent it to Prime Minister Stephen Harper. The children were enthusiastic about letting Mr. Harper know their opinions. As one of the students said, "We don't just learn about fairy tales; we learn about real people and we have feelings about them, too." The junior students created dynamic posters that were plastered all over the front foyer. They made a clear statement to visitors to our school that we were committed to the Make Poverty History Campaign.

As our White Band Day came near, notes went home to remind children to wear white and that the white wristbands were ready to be passed out to the children. It couldn't be clearer that the White Band Day was here. On April 26, every classroom and every hallway in the school was filled with staff and students wearing their white outfits.

We started out by having a pep rally in the gym where we watched a slide show about the importance of this campaign for children all over the world. Then, we proceeded outside and made our own "human" band around the school by linking arms, holding up the white barrier tape and chanting "Make Poverty History". Students raised their voices to make the community aware of this important campaign and also raised $580 to help support children in need around the world. It was a great success and our campaign continued throughout the year. The students later took part in a readathon where they raised more than $2,000 for the ShareLife campaign and we also worked together to gather small items to make packages for impoverished children in Cuba. In September, our school will be looking forward to seeing the pictures of the children who received our packages.

And so the campaign continues into our next school year as we continue to fight global poverty.