A passion for justice

Youth across Canada are joining the Make Poverty History campaign, recognizing that the time for change is now

On June 29, 2006, supporters gathered in Toronto's Nathan Phillips Square to celebrate the first anniversary of the Live 8 concerts that shook two billion viewers worldwide and gave birth to the movement Make Poverty History (MPH) in 2005. MPH, the biggest ever anti-poverty campaign, aims to ROCK the leaders of the free world (the G8) into action and effect changes in aid, debt relief and the trade regulations that allow millions to suffer with disease and poverty. Mayor David Miller and Steven Page of the Barenaked ladies greeted the crowd with stories of progress and introduced local heroes from Toronto schools. Photo and caption from Marc De Mouy of Grapevines – Downtown Toronto's Community Press 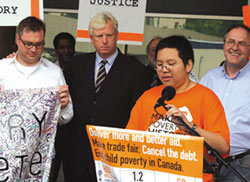 Joshua Liu addresses the crowd at the first anniversary of Live 8. Behind Joshua are Stephen Page of the Barenaked Ladies, Toronto Mayor David Miller and Gerry Barr, co-Chair of the Make Poverty History campaign. Toronto. June 2006 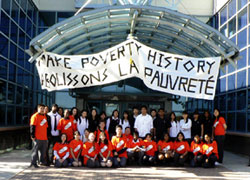 Members of Our Kids Our Future, a social justice group at Mary Ward Catholic Secondary School in Toronto, proudly display their commitment to Make Poverty History. 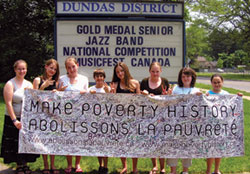 St. Thomas More Catholic Secondary School of Chesterville
The three schools are taking action in the School2School.s Make Poverty History Banner Tour, which has travelled to some 33 schools and three universities in Canada and has touched the lives of thousands of students

Ever since 1992, the United Nations declared October 17 as the International Day for the Eradication of Poverty. Our Kids Our Future, a social justice group at Mary Ward Catholic Secondary School that engages youth in addressing child poverty in Canada, decided to take action and raise awareness about ending poverty worldwide.

By lunchtime on October 17, 2005, Mary Ward School was draped in white, the official colour of the international Make Poverty History campaign. A 120-foot white banner hung along each side of the school roof like a white wristband, the symbol of the campaign. As well, a 10-foot banner that read "Make Poverty History" in English and French spanned the top of the school entrance.

Several students and staff could be seen wearing bright orange "Make Poverty History" t-shirts. Other students wore white uniform tops in support of the event. At lunch, Our Kids Our Future members operated a booth encouraging students and staff to sign more than 500 Make Poverty History postcards to be sent directly to then Prime Minister Paul Martin, asking him to commit to the goals of the campaign.

Months prior to October 17, Mary Ward School's youth group, Our Kids Our Future, had been collaborating with other schools to find a way to get more involved in the Make Poverty History campaign. In partnership with Campaign 2000, Our Kids Our Future launched the School2School initiative, a national resource tool endorsed by the Canadian Make Poverty History campaign to encourage and aid schools in raising awareness about global poverty. The School2School project successfully engaged five other high schools in Ontario and New Brunswick to run similar events also on October 17.

After this successful joint action, the students held on to their excitement and looked for other ways to get more Canadian schools and youth involved with School2School and the Make Poverty History campaign.

Inspired by Blake's initiative, the youth of School2School decided to start a Make Poverty History banner to be signed by youth and school communities across Canada. The banner would show the Canadian government that our youth are passionate about Canada taking a leadership role in addressing global poverty.

With Blake's help, the youth achieved an exact replica of his banner and the School2School Make Poverty History Student Banner Tour was born.

Since November 2005, the School2School banner has travelled to 33 schools and three universities. Many of these schools are in Toronto, but several are in Lindsay and Hamilton, Ontario. Part of the banner campaign included an extensive 13-school tour of Hamilton organized by Linda Lannigan.

In less than a year, the School2School Make Poverty History Student Banner has touched the lives of thousands of students in Southern Ontario. The banner even received interest from schools located in both the East and West coasts, showing that youth support for the Make Poverty History campaign is nationwide.

With thousands of student signatures on the School2School Make Poverty History banner, the group plans to present the banner to Prime Minister Stephen Harper to show him that Canada's youth-the country's "greatest resource"-are urging him to make ending global poverty one of the government's top priorities.

For the first time in history, we as a global society have the resources necessary to end the most extreme forms of poverty. The actions we take and the choices we make in the next five years will have an astronomical impact on the way our world will look a hundred years from now. We have a responsibility to ourselves and to the rest of humankind to take action in this pivotal time of our day and age. Our youth know this and have recognized that the time for change is now.

We are here today because we are scandalized by the needless suffering that poverty causes. To be passive or indifferent in the knowledge that one child dies needlessly every three seconds is to be an accomplice in barbarity!

We say to the leaders of the world's richest nations. We have no intention of being accomplices in barbarity.

Our presence here today, our demand for justice, echo those great historic campaigns to end slavery, and more recently, apartheid.

Our presence here today shows that we are aware that only together can we Make Poverty History.