Kingston, Ontario, calls itself the Limestone City. Its downtown boasts dozens of elegant 19th century buildings fashioned from chunks of the local sedimentary rock that is so easy to cut. It's a place known for tourism, Queen's University, and Canada's Royal Military College. The Rideau Canal ends here. 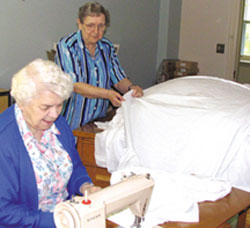 Sister Mary Laboure (seated) and sister Anne Hudec of the sisters of Providence sew dozens of old sheets together to create a 400 metre banner for their community to take part in a Day of action in their hometown of Kingston, Ontario.

This small city at the northeastern corner of Lake Ontario is also the nation's prison capital. It was described by Charles Dickens as a "very poor town" when he visited not long after the colonial authorities built Canada's first penitentiary here. A century later Robertson Davies, who set his Salterton trilogy in Kingston, described it as a place where the social divisions were "as sharp as you could cut them."

It was, in fact, convict labour that cut the stone for so many of those pretty buildings. And the families of prisoners, together with many descendants of the Irish labourers imported to dig the Rideau Canal, settled in Kingston's North End.

Indeed, as late as the 1960s there was still housing without water and sewer service north of Princess Street, Kingston's main downtown street. Until quite recently, the respectable middle class would never consider living "North of Princess." They stayed in more elegant neighbourhoods on the other side of town.

All of which makes Kingston a hothouse for north/south divides that continue to fracture a world wracked by savage inequalities. These are the divides that the Make Poverty History campaign seeks to confront. And the Canadian campaign, to its credit, places poverty at home – in places like Kingston's North End – alongside its demands for social justice on a global basis.

Kingston's Sisters of Providence of St. Vincent de Paul trace their roots to a group of dedicated women religious who began their mission in the mid-19th century. From their North End motherhouse, the Sisters set about working on behalf of the orphaned, the sick and the aged. They even embarked on exhausting and humbling "begging tours" to the town's wealthier districts, seeking money to clothe and shelter those in their care.

After a century of institution-building, the Sisters took stock and, along with so many other religious communities, embraced the spirit of the second Vatican Council. By 1989 part of their mission statement read: "We strive to be prophetic leaders in our Church and in society through promotion of structures and relationships of equality and mutuality and through attitudes and actions for justice and peace."

In 1995 I found myself standing shoulder-to-shoulder with a group of Sisters and their supporters in front of Kingston's most famous limestone landmark.

We started to keep a weekly vigil at City Hall that year, when Ontario's government under Mike Harris began its frontal assault on our most vulnerable neighbours, slashing social assistance. It was part of a generalized attack on public provision that included the federal Liberal budget of the same year. For me, the City Hall vigil has always been a defence of the public good in an era that privileges all that is private.

The signs read "Know Justice/Know Peace", "Food for the Hungry", "A Vigil for Peace". Sometimes there are only ten of us. Sometimes our numbers swell to a few dozen. But every Friday noon there is always a small band there. The people having lunch in Confederation Park, drivers passing on Ontario Street, tourists alighting from their buses-no one can miss us.

Since our vigil began, social assistance incomes in Ontario have declined by 34 percent. We keep pointing this out. Over the years, the vigil keepers have also pointed to the Walkerton water tragedy, the invasion of Iraq, the Darfur tragedy. Then, last October we began making signs with red maple leaves. They read "Make Poverty History."

Kingston City Council passed a resolution proclaiming October 17, 2005, Make Poverty History day. The politicians had listened to longtime vigil keeper Sister Peggy Flanagan who told them of serving meals to the poor at the end of every month. "A lot of them are families with little children. It disturbs me greatly that even people who are working cannot feed their kids and pay the rent."

The vigil's tenth anniversary coincided with the Canadian Make Poverty History campaign's day of action highlighting the demand for the elimination of child poverty in Canada.

Melanie Murphy, a young activist who had already completed stints working with nongovernmental organizations in Mexico, Peru and India, challenged her fellow Kingstonians to make common cause with the Sisters of Providence and their supporters. She used a newspaper column to ask how many could survive a 34 percent cut to their incomes.

In the weeks leading up to Make Poverty History's day of action, two Sisters of Providence, both in their 80s, were busy tearing dozens of white sheets in half and then sewing them end-to-end. By the time Sr. Mary Laboure and Sr. Anne Hudec finished, they had produced a 400-metre white band. The idea was to mark both the anniversary and the Make Poverty History campaign in a special way.

On October 17, more than 300 people gathered at City Hall. They came from different faith communities, trade unions, and community organizations. They were all concerned citizens. Together, they raised a white band fashioned from old bedsheets and completely surrounded City Hall. Here in the Limestone City, people made known their commitment to bridge the poverty gap and heal divides at home and elsewhere in the world.

Kingston writer Jamie Swift is co-director of the Justice & Peace Office of the Sisters of Providence of St. Vincent de Paul.