In 2008, I agreed to be the principal of a Sino-Canadian high school in Shenyang, China. It was an opportunity to see, feel, and taste the new China.

Provincial ministries of education in Canada and China have collaborated in the past decade to prepare Chinese students for study in Canadian universities. In 2008, I agreed to be the principal of a Sino-Canadian high school in Shenyang, China. It was an opportunity to see, feel, and taste the new China. Although I was curious about student life, I was even more intrigued by the possibility of working as a lay missionary in an evolving Communist state.

Shenyang, with its 10 million strong population, is the capital city of Liaoning Province. The city lies a mere 500 kilometres west of North Korea.

A score of Catholic and Protestant churches are scattered across the city. I joined one of these, Sacred Heart Catholic Church, which was built by French missionaries 130 years ago. The current pastor, Fr. Joseph, invited me to teach English as a Second Language (ESL) alongside another foreign teacher. We prepared parishioners for the Sacraments of Initiation using ESL (English as a Second Language) as a tool for preparation. On a weekly basis I gave lessons to about 30 adults. 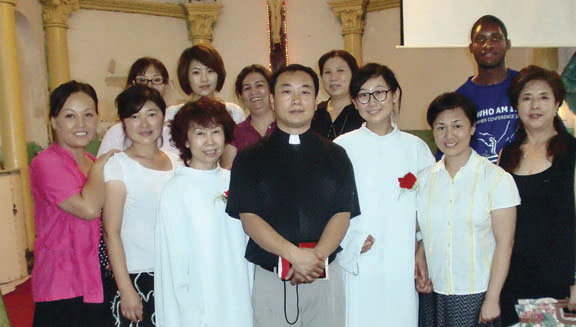 Fr. Joseph and some of the parishioners at Sacred Heart Church who assist him in the community. Shenyang, Liaoning Province. China.

The other foreign teacher has been in China for three years. In addition to his professorship at North Eastern University in Shenyang, he often met with students in small groups to pray and to answer their questions about the tenets of the Catholic faith. This was done discreetly and very successfully.

I was surprised by the vigor of parish life at Sacred Heart. Fr. Joseph explained that not all regions in China enjoy a comparable level of religious tolerance. The recent cultural detente in Liaoning Province may be attributed to the efforts of one cleric in particular, Bishop Pius Jin, who on the strength of his reputation alone managed to forge a cooperative rapport with the provincial government. Bishop Jin drew on his charisma and tenacity to obtain permission for daily and Sunday worship, albeit within the confines of the gated parish communities. He was so loved and respected by the people that his requests for greater tolerance were generally agreed to by local officials, which led to the Church’s unprecedented growth. 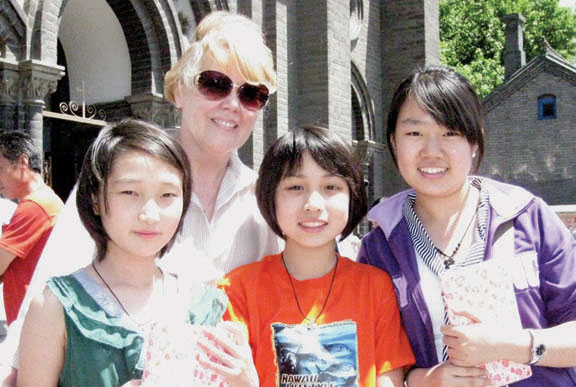 Dana with Heidi (left), Lucia, and Simona, three of the eight students she prepared for Confirmation at Sacred Heart Church (photo left). Heidi has musical talent, Lucia is almost fully bilingual and studies the Bible at home every day, and Simona is a high school student who hopes to study in Australia or North America one day. All three on this day received the Sacrament of Confirmation.

Today, Fr. Joseph continues to work very much in the spirit of Bishop Jin. To promote the Gospel, Fr. Joseph has established the Catholic Social Services. Since poverty in the broader community is very great, the government permits the Catholic Social Services to find housing, jobs, and medical treatment for street people. Government officials realize they score long term political points by allowing the Church to aid the poor, abandoned, sick, or dying.

While priests, sisters, and lay missionaries give ongoing support, they also bring the Good News. And when asked, they work hand in hand with those who seek baptism. Just as the early Church struggled to exist, so the emergent Church in China does much to win over communities, one heart at a time.

I found Sacred Heart to be a bustling parish, joyful and energized by song and worship. It was costly for many to close their shops in order to attend an English or Chinese Mass, and yet, both the chapel and the church were packed every Sunday morning. After Mass, small committees met to look after opportunities for Gospel work, such as visiting orphanages and the aged.

Choir members showed their personal commitment to the music ministry, finding practice times and providing music at the many and various parish events. There were almost no funds for building main-tenance, improvement, or expansion, and yet at Christmas time, small gifts made their way into the hands of the children. Simple treats were always distributed so that no one went home hungry, and many community meals were organized. Fr. Joseph was determined to feed his parishioners—body and soul. 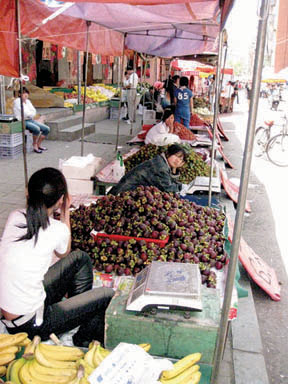 What amazed me each time I traveled between the parish and my home 40 kilometres outside the city was the skyline of Shenyang by night. On the rooftops of several tall buildings throughout the city I saw large white crucifixes electronically lit. No one could tell me who put them up. Of course there were no words, but their very presence sent a clear message: “God is with you. Come and see.”

Are you interested in being part of Chinese life for six months or more?

Many openings exist in Chinese universities and colleges for teachers of English and other subjects. AITECE (Association for International Teaching, Education and Curriculum Exchange) is a non-profit Christian organization that facilitates the placement of foreign teachers in China. You will be paid a monthly salary by the Chinese institute and given free accommodation. Depending on your qualifications and the finances of the institute, you may also be provided with airfare. Requirements include a B.A. degree and up or a Language Teaching certificate.

AITECE strives to build better relations among peoples through the sharing of understanding and values.