Members of the World Spirit Youth Council chat during a break. The Council is one of a growing number of interfaith youth organizations around the world. Parliament of World Religions, December 2009, Australia.

The international Year of Biodiversity is a celebration of life on earth and of the value of biodiversity for our lives. The world is invited to take action to safeguard the variety of life on earth: biodiversity. The small choices that individuals make add up to a large impact because it is personal consumption that drives development, which in turn uses and pollutes nature. By carefully choosing the products they buy and the government policies that they support, the general public can begin to steer the world towards sustainable development. Governments, companies, and others have a responsibility to lead and inform the public, but finally it is individual choices, made billions of times a day, that count the most. (“Sustaining Life on Earth,” Secretariat of the Convention on Biological Diversity, an international agreement signed at the UN Conference on Environment and Development, Rio de Janeiro, 1992)

...for the Rapprochement of Cultures 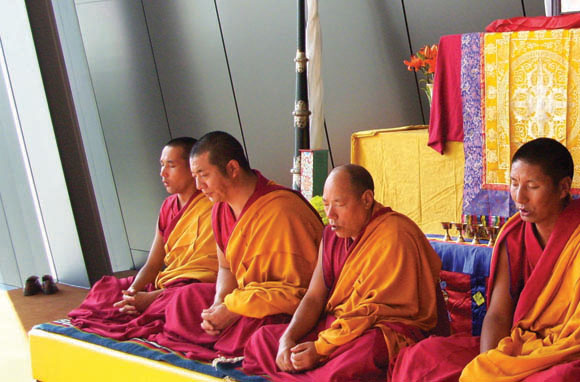 Buddhist monks perform an opening chant before a workshop.

The United Nations has declared 2010 the International Year for the Rapprochement of Cultures. Individuals, community organizations, non-profit organizations, and government agencies from all over the world will be organizing events on interreligious and intercultural dialogue, understanding and cooperation for peace. High-level dialogue and/ or informal interactive hearings will also take place with civil society. Affirming that mutual understanding and interreligious dialogue constitute important dimensions of the dialogue among civilizations and the culture of peace, the assembly encouraged member states to consider initiatives that identify areas for practical action at all levels of society to promote interreligious and intercultural dialogue, tolerance, understanding and cooperation. It also encouraged the promotion of dialogue among the media from all cultures and civilizations. (United Nations)

Some people clal it the Olympics of interfaith dialogue. Every five years, the Parliament of World Religions convenes somewhere in the world. Over the last 25 years, these gatherings have attracted as many as 10,000 people of numerous religions from the four corners of the earth.

In December 2009, 6,000 interfaith pilgrims converged upon the city of Melbourne, Australia, to attend the most recent Parliament and to nurture and celebrate the growing global interfaith movement. The six-day conference featured 700 workshops that touched on issues in the fields of religion, spirituality, and social justice Key themes of the conference included climate change; indigenous peoples; youth involvement in dialogue; interfaith education; social, economic, racial and gender justice; Australian interfaith activity; and nonviolent conflict resolution.

I was there along with the other representative from the Scarboro Missions Interfaith Department. The Parliament was the greatest experience of my life. To join with thousands of sisters and brothers of so many religions from all over the world to pray, to celebrate, to dialogue together. It is difficult to find the words to describe this peak experience. Never have I felt more like a global citizen, possessed of both hope and peace.

Submitted by Paul McKenna, coordinator of the Scarboro Missions Interfaith Department. To learn more about the Melbourne Parliament event, visit the website of the Council for a Parliament of World Religions: www.cpwr.org