What happens when 15 Muslims and 15 Christians spend four evenings together in dialogue and discussion? In this case, lots of wonderful things.

Small group discussions helped to build trust and community, and these conversations continued informally after the sessions ended.

Scarboro’s Interfaith Department has been involved in Muslim-Christian dialogue for some years and has sponsored numerous events enabling the public to learn more about Islam and Muslim-Christian relations.

This small group experience at Scarboro and Noor was inspired by six weeks of Jewish-Christian dialogue that took place last year when Sr. Lucy Thorson, a Sister of Sion and member of Scarboro’s Interfaith Department, brought together Christians and Jews for small group exchange.

Scarboro Father David Warren, who is committed to building bridges between Islam and Christianity, said: “I have studied Islam, but Islam does not live in books. Islam lives in people. The Muslim-Christian dialogue series was an opportunity for me to discover Islam as it is lived by Muslim men and women. I am grateful for the experience!”

“We are called to respect the religion of the other, its teachings, its symbols, its values.”

Each gathering began with a 15-minute presentation on the evening’s theme by a speaker from both faiths. The series themes were: the challenge of passing on our faith and cultural traditions to the next generation; the challenge to youth living their faith in a multicultural, secular, Internet world; how our sacred books inspire and challenge us to an ethic of social and economic justice; and on the last evening, Muslims and Christians transforming the world together. 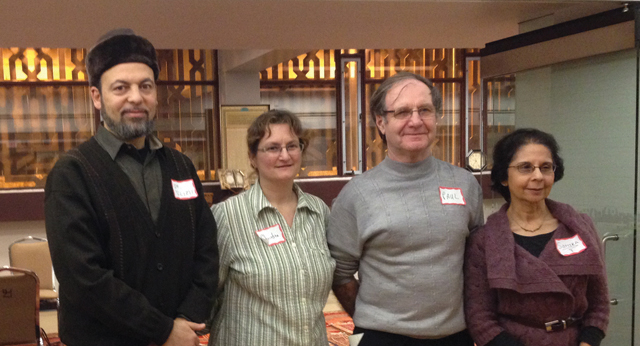 Some of the presenters at the Muslim-Christian dialogue series are (left) Imam Dr. Hamid Slimi and (far right) Samira Kanji, both leaders in the Toronto Muslim community. Center: Sister Christine Gebel of Our Lady’s Missionaries; and Paul McKenna, coordinator of Scarboro’s Department of Interfaith Dialogue

Dr. Helene Ijaz, a Christian educator with extensive experience in Muslim- Christian relations said: “Having journeyed in a Muslim-Christian marriage for more than four decades, I am acutely aware of the divisive impact of an approach to interreligious relations which emphasizes differences in religious beliefs, rituals, and laws. These sessions of Muslim-Christian dialogue transcended religion-specific issues by focusing on aspects of religious practice rooted in universal human concerns. This had a profoundly unifying effect on participants and promoted a strong sense of interconnectedness and friendship.”

After the opening faith presentations, participants were divided into groups of six – three Muslims and three Christians—for an hour-long group dynamic that helped to build trust, community, and participation.

Samira Kanji, President of the Noor Cultural Centre and a key figure in the Toronto Muslim community, said: “Often, the value of a thing is not truly appreciable until it has been tried. The experience of this 4-part series was eye-opening and immensely gratifying for everyone who participated, validating the claim that much good resides in interfaith dialogue conducted with an understanding of mutual, sincere respect.”

Participants gather for a plenary discussion at the end of each evening.

At the end of each evening participants gathered for a plenary discussion of the experience. On the final evening, email addresses and phone numbers were exchanged to continue this Muslim-Christian adventure in friendship and dialogue.

Sr. Christine Gebel has a leadership role in her congregation, Our Lady’s Missionaries, and has a background in Muslim-Christian dialogue in the Philippines: “With each evening I felt a profound sense of gratitude and joy in the diversity in our group … different shades of Muslims and Christians, different cultures, a wide range of ages. And all were welcomed and accepted. If this same acceptance and celebration of diversity could be lived out across Canada…. What a gift we could be to the world!”

In the words of participant Khadijah Kanji who is responsible for programming at the Noor Centre: “Our shared religious belief in the inherent equality of all of God’s creation set the stage for a conversation that was respectful and enriching, and one that sought to truly see each other as people beyond the stereotypes. Members from both communities expressed to me the kinship they felt with each other, and how they were sad to say goodbye. Verse 49:13 of the Qu’ran tells us that diversity among people is a purposeful act of God in order that we may ‘come to know one another.’ This four-week session of dialogue between Christians and Muslims reminded me of how valuable coming to know one another really is.”

Officials and peacebuilding trainees in Central Java, Indonesia, which has the largest Muslim population of any country

Muslim-Christian dialogue in the Philippines and Indonesia

When the Golden Rule poster was published in 2000, no one guessed that its reach would extend beyond the borders of Canada. However, in its 13 years, the poster has made its way to the four corners of the Earth and has been published in numerous languages. 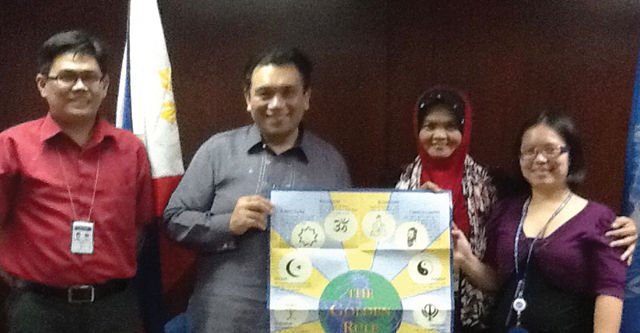 
In November 2013, we were contacted by Dr. Potre Diampuan, a Muslim educator in Manila, Philippines, and regional coordinator for Southeast Asia and the Pacific for the United Religions Initiative, a peace and bridge-building organization and a UN-accredited NGO. She writes: “We heavily advocate the practice and the teaching of the Golden Rule and your poster is one of the tools that we use in many of our programs, especially in this year’s International Day of Peace where the theme is ‘Education for Peace.’”