A priority for Pope Francis

When the cardinals elected Jorge Mario Bergoglio as pope in March 2013, many of those involved in interreligious work immediately wondered: What could we expect from this Argentine Jesuit, the former archbishop of Buenos Aires? This new pope—Pope Francis—was following John Paul II and Benedict XVI under whom relationships with Judaism and other non-Christian religions had grown and deepened to an amazing degree.

Within hours it emerged that the new pope’s only published book had been a collection of warm, collegial conversations between him and one of his best friends, an Argentine rabbi named Abraham Skorka (in English: On Heaven and Earth, Image Books, 2013). In it the pope said: “God is open to all people. He calls everyone. He moves everyone to seek Him and to discover Him.” Only hours after his election, he wrote to Rome’s Jewish community inviting its Chief Rabbi to attend the Mass inaugurating his pontificate. Pope Francis hoped “to be able to contribute to the progress that Jewish-Catholic relations have seen starting from the Second Vatican Council, in a spirit of renewed collaboration.” From the very first days of his papacy, it was clear that Pope Francis intended to reach out beyond the bounds of Catholicism, and even of Christianity.

The Catholic Church is conscious of the importance of promoting friendship and respect between men and women of different religious traditions...”

Pope Francis during his audience with representatives of the Churches and ecclesial communities and of the different religions, March 2013

Pope Francis’s first year has been marked by many moments that demonstrate his desire to endorse and build upon the interreligious commitment of his predecessors. The day after his inauguration, the pope met with representatives of other Christian communities, and of many non-Christian faiths. Addressing first the Jewish and Muslim delegates, he emphasized “the importance of promoting friendship and respect between men and women of different religious traditions,” and reminded them that “the Church is likewise conscious of the responsibility which all of us have for our world, for the whole of creation, which we must love and protect. There is much that we can do to benefit the poor, the needy and those who suffer, and to favour justice, promote reconciliation and build peace.” This landmark speech combined the quest for greater solidarity and justice (a theme which has become central to his papacy) with an acknowledgement of the truth, beauty, and goodness that are to be found, and appreciated, in other faith traditions.

Breaking with precedent, Francis chose not to delegate the writing of the Vatican’s annual message for Ramadan, the Islamic month of fasting. In his own words he said: “We are…called to think, speak, and write respectfully of the other, not only in his presence, but always and everywhere, avoiding unfair criticism or defamation…We are called to respect the religion of the other, its teachings, its symbols, its values.” He spoke of “the great importance of dialogue and cooperation among believers, in particular Christians and Muslims, and the need for it to be enhanced.” Those were powerful words and they were received with gratitude by the world’s Muslim populations. 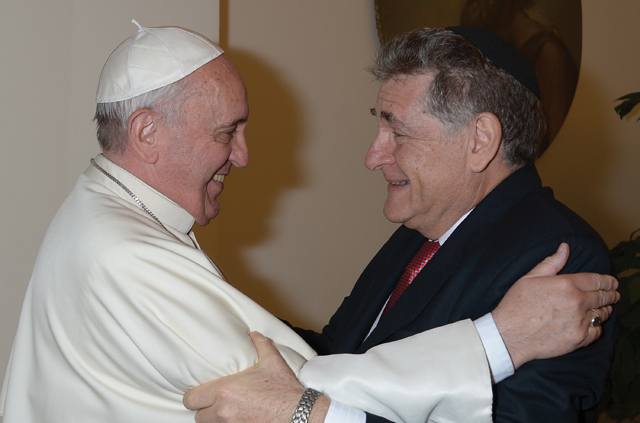 October 2013 marked the 70th anniversary of the Nazi round-up of hundreds of Rome’s Jews, and the Holy Father welcomed a delegation from the Jewish community to the Vatican. He spoke to them of his great sadness over those tragic events and underscored the need to learn the lessons of such bitter experiences to ensure a better future for everyone: “What the [anniversary] day commemorates could be described as a memoria future [remembering for the future], an appeal to the younger generations not to be indifferent to their own existence, nor to allow themselves to be swept away by ideologies, never to justify the evil we encounter, always to be on the alert against anti-Semitism and against racism whatever their origin may be. I hope that, through initiatives such as this one, networks of friendship and fraternity between Jews and Catholics may be formed and nourished in this, our beloved city of Rome.”

To mark the conclusion of the Year of Faith (2012-13), Pope Francis drew upon the input of the most recent Synod of Bishops, issuing a remarkable Apostolic Exhortation entitled The Joy of the Gospel. Among the numerous important topics the pope addresses in that document is the Catholic Church’s relationship to Judaism, Islam, and other religions: “The Church, which shares with Jews an important part of the sacred Scriptures, looks upon the people of the covenant and their faith as one of the sacred roots of her own Christian identity…God continues to work among the people of the Old Covenant and to bring forth treasures of wisdom which flow from their encounter with his word. For this reason, the Church also is enriched when she receives the values of Judaism.” And, speaking of the other major faiths: “An attitude of openness in truth and in love must characterize the dialogue with the followers of non-Christian religions…Interreligious dialogue is a necessary condition for peace in the world, and so it is a duty for Christians as well as other religious communities.” None of this was exactly new, but it was spoken with a passionate conviction that clearly marked it as a key goal of Pope Francis’s service.

All of these events and statements can leave little doubt that interreligious dialogue is, and will remain, one of the pillars of the new pope’s leadership. After repeated invitations from Israeli and Palestinian leaders, Pope Francis recently announced plans to travel to Jordan, Israel, and the Palestinian Territories in late May 2014.

In a world of so much bad news and negativity, the Catholic outreach to other religious traditions is a genuine “good news” story, which continues to unfold in our times—and which will almost certainly grow and develop further under the papacy of the first successor to St. Peter to have come from the Americas, but one whose embrace clearly includes all of God’s children.

Dr. Murray Watson is a Catholic theologian, biblical scholar and interfaith activist who spends part of each year living and teaching in Jerusalem. As a friend of Scarboro Missions, he cooperates with Scarboro’s Interfaith Department in promoting greater knowledge of and greater collaboration with Judaism and the other non-Christian religions.

Scarboro’s Interfaith Department is pleased to announce its new and expanded “Milestones in Modern Catholic-Jewish Dialogue” highlighting key moments in the Church’s relationship with Judaism and incorporating some of Pope Francis’s advances in this field. Now available online at https://www.scarboromissions.ca/interfaith-dialogue/jewish-christian-relations