For the Third Sunday of Easter, the Gospel of John tells us of the disciples’ encounter with the risen Jesus at the Sea of Tiberias. They had gone fishing during the night with no success, and now a stranger on the shore speaks to them: “Children, have you caught anything to eat?” He tells them to cast their net again, and although it is now daylight, the net fills with fish. John, who recognizes Jesus by his love and concern, tells Peter that it is the Lord, and Peter immediately leaves the boat and goes to shore. All the disciples become aware that Jesus is in their midst when he invites them to share a meal with him.

In all four Gospels there are stories of the disciples’ encounters with Jesus after the Resurrection. These texts help us to see how we might encounter Jesus today:

…In the Eucharist, the remembrance of the Last Supper: “Now while he was with them at the table, he took bread and said the blessing; then he broke it and handed it to them. And their eyes were opened and they recognized him” (Luke 24.30).

…In the bearing of Good News: “As they entered the tomb, they saw a young man, dressed in a white robe, sitting on the right side; and they were alarmed. But he said to them, “Do not be alarmed; you are looking for Jesus of Nazareth, who was crucified. He has been raised; he is not here. Look, there is the place they laid him. But go, tell his disciples and Peter that he is going ahead of you to Galilee; there you will see him, just as he told you” (Mark 16.5-7). 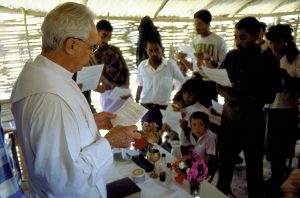 At a campo in San José de Ocoa, Dominican Republic, Father Lou Quinn, SFM, and parishioners share the Word of God. Circa 1995.

…In the Word of God (on the road to Emmaus): “They said to each other, ‘Were not our hearts burning within us while he was talking to us on the road, while he was opening the scriptures to us?’” (Luke 24.32)

…In the stranger (as Mary Magdalene weeps outside the tomb): “She turned around and saw Jesus standing there, though she did not recognize him…supposing him to be the gardener” (John 20.14-15).

…In our woundedness (the wounded Christ): “A week later his disciples were again in the house, and Thomas was with them. Although the doors were shut, Jesus came and stood among them and said, ‘Peace be with you.’ Then he said to Thomas, ‘Put your finger here and see my hands. Reach out your hand and put it in my side. Do not doubt but believe.’ Thomas answered him, ‘My Lord and my God!’” (John 20.26-28)