Sometimes I ask myself, why have some people lost hope and happiness in today’s society when they seem to have everything? Why do some people easily lose the meaning of life?

In general, we can say that these people may have experienced some type of psychological trauma. Maybe they have had a difficult childhood, have had family conflicts, or have been under the bad influence of friends and society. In today’s society, people are more individualistic and the problems of others are not considered of great importance. So, unhappy and hopeless people often go unnoticed.

One of the main concerns of Christianity must be to give hope to suffering people—a hope that gives meaning to their lives. If we look at the Old Testament, the Israelites believed that God had not only led them out of slavery, but God was also present to protect them now and in the future. This idea of hope made them aware and vigilant in troubled times, and prepared them to welcome God’s kingdom at any time. So hope, in the Jewish context, means to wait for, to be vigilant, to be aware of God’s actions at all times. Hope is an experience of faith and salvation.

As a missionary in Cambodia for the past 12 years, I have met people who have suffered from two great disasters—the Vietnam War, followed by the reign of Pol Pot during the time of the Killing Fields—years of suffering in which more than two million people were killed. In those years, many Cambodians lost hope because they saw their people dying under unjust conditions and only a few of them were strong enough to survive the ordeal and begin a new life. 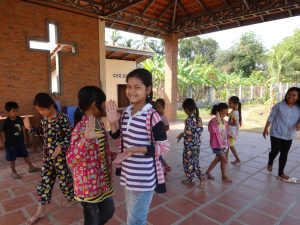 I was first sent to a small Catholic community called Kdol Lue in the isolated district of Krouch Chhmar along the Mekong River. This community had a lot of Christians who survived the war and the time of Pol Pot. One day I went to visit Yei Elisabeth, a Buddhist who had converted to Catholicism when she was a child. She said to me, “When the Pol Pot regime started, all Catholics were persecuted and killed. But my family and I escaped to the jungle and lived there for four years. The living conditions were terrible but we hoped in the Lord. We hoped that God would give us a new beginning, a new life. We hoped that He would save us. We believed that God had never left us. All those sufferings were terrible, but we believed that He would show us a way to a better future. So Father Ivan, we never gave up praying in those difficult times. We are alive to give testimony that when you have faith in God, He will always give you a chance to start again.”

When I heard that, I felt bad because I often feel angry when I don’t have enough good food or my room is not in perfect condition, and I always complain if the food market is too far away. Sometimes I feel hopeless when I don’t have some simple things that I feel a necessity. But I have never suffered like Yei Elisabeth.

Like the Israelites and Yei Elisabeth, we must hope in the Lord. The difficulties they experienced weren’t motives for losing their hope and faith. On the contrary, it brought them the possibility of waiting for something new for their future. We need to hope and believe in God especially when we get lost and suffer.

Like the Israelites and Yei Elisabeth, we must hope in the Lord. The difficulties they experienced weren’t motives for losing their hope and faith. On the contrary, it brought them the possibility of waiting for something new for their future. We need to hope and believe in God especially when we get lost and suffer. God will bring us salvation and a new beginning; we just need to trust in God.

In today’s Gospel, Jesus says that God is pleased to give us the Kingdom of God, a Kingdom that God wants His chosen people to follow. But over the years, as we know, because of the influence of new philosophies, the Israelites lost their spiritual ability to be vigilant and placed their hope in their own abilities to build a good nation. It generated divisions among the people of Israel where religious leaders were considered holy people and the poor were just forgotten. So the kingdom of God presented by Jesus was a call to a conversion of heart. Jesus again tells his disciples to be aware of God’s kingdom, which brings a new beginning and a real salvation. If His disciples are persecuted for announcing His Kingdom, they must hope in God and never give in to difficulties.

So, today’s readings call us to hope in the Lord. A hope that makes us aware and vigilant of God’s presence at all times. Sufferings, conflicts, and difficulties can never be reasons for not following Jesus. On the contrary, they are experiences that strengthen our hope in God that one day He will bring us to a new beginning. So if some people have lost hope, are unhappy, or have lost the meaning of life, not only must they look for help with psychologists, but they must also trust in God who always offers us a new beginning.

Fr. Ivan Campaña is an Ecuadorian missioner of the Colombia-based Yarumal Institute for Foreign Missions. Fr. Campaña is parish priest of Kdol Leu, about 150 kilometres northeast of Phnom Penh, Cambodia. He resides with the Scarboro Missions community when doing studies in Toronto.