There were times when Our Lord really amazed the apostles, but everything he did and said was intended to lead them and the rest of us into a fabulous new life.

On one occasion Jesus made the apostles get into their boat and cross the lake without him. After the apostles had left, Jesus dismissed the crowd that had spent the day with him. He then went up into the hills to pray for several hours. The apostles meanwhile had run into bad weather on the lake and were straining to make headway against a strong wind and a heavy sea.

After hours of struggle in the murky darkness, the apostles suddenly saw a figure coming towards them on the water. Terrified and totally unprepared for such a sight they thought they were seeing a ghost. Out of the darkness they heard Jesus: Courage! It is I. Do not be afraid. He had come, walking on the water, not to frighten them but to be with them in their struggle.

As in other unusual situations, Peter’s spontaneity and generosity stirred him into action. Although he still wasn’t sure that it was Our Lord, he responded: Lord if it is you, tell me to come to you across the water.

What an incredible expression of trust, but was he prepared for the challenge, or would something greater be needed? Our Lord said to him, simply, Come.

The other apostles could only watch in amazement as Peter actually got out of the boat and started walking across the water towards Our Lord. It was a moment they would never forget. By now Peter was a short distance from the boat, not yet with Our Lord, when something went wrong. Into this moment of sheer faith, Peter allowed the force of the wind to bring human fear and he began to sink. In an exclamation of both fear and faith Peter called to Jesus, Lord, save me. 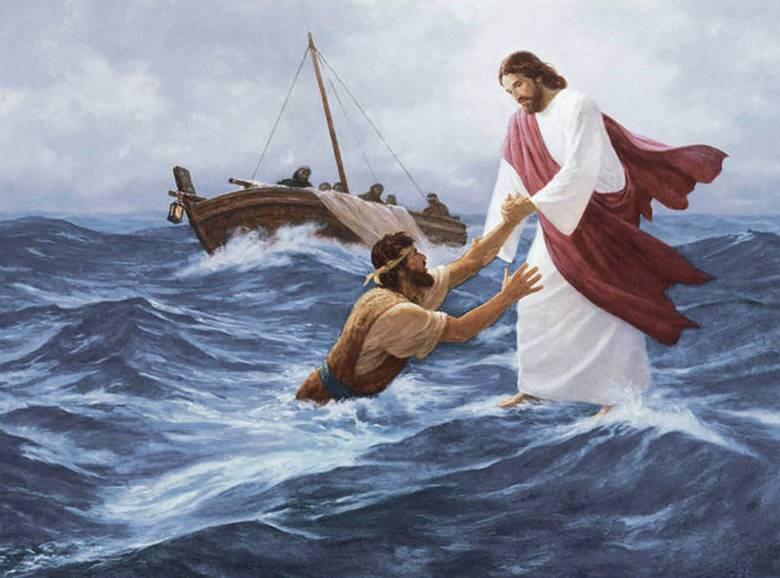 Quickly Jesus put out his hand and took hold of Peter. Leading Peter back to the boat, Jesus asked, Ye of little faith! Why did you doubt?

Peter had no answer. For a moment he had truly experienced the power that comes with great faith in Jesus and had let it slip away because he had given in to human fear. Faith, he had to learn, is not merely a solemn statement, nor even a careful and thoughtful decision, but a commitment that must persevere in the face of every challenge.

When it was all over and they had recovered their voices, the other apostles expressed, for themselves and for all who would later come to have faith in Jesus, Truly, you are the Son of God.

On later reflection, it would be evident to Peter and the other apostles that for them to walk on water was not important. What was important was to have a deep and persevering faith in Jesus as the Son of God. Jesus had not come from heaven to teach people how to walk on water, he had come to take away the sins of the world and to teach people how to live as children of God.

Living faith demands both wholehearted love for God and a true love for neighbour that shows itself in sincere forgiveness, compassion, justice, and concern for all people.

In their personal response of faith, the apostles undertook to live, no longer for themselves but for him. With this commitment of faith their lives were profoundly changed because living faith demands both wholehearted love for God and a true love for neighbour that shows itself in sincere forgiveness, compassion, justice, and concern for all people.

We have been called to this same faith and, apart from the question of our own happiness, much will depend on our response because the people of our time desperately need the example of lives that are deeply Christian.

As we ponder the account of the time that Jesus walked across the water, our faith can be strengthened. Our faith can give us the assurance that the one who walked across the lake on a stormy night to be with his friends in their difficulty, will certainly be with us in a special way whenever we face deep pain or sorrow. We can know too that in a time of deep suffering, faith in Jesus’ presence can stave off despair and bring us a profound inner peace. We can even look beyond death itself and smile in anticipation at the incredible life with God that lies ahead for all whose lives are guided by faith.

Unable to go to mission in China because of World War II, Fr. Bas Kirby was assigned to the Dominican Republic in 1944. In 1953, he went to work among the poor of Guyana when Scarboro opened its mission there. From 1957 to 1969 he served in the Dominican Republic. His missionary service in Canada included work at Scarboro Missions’ Latin American Institute in St. Mary’s, Ontario, then at the seminary in Scarborough, Ontario, and finally as part of the formation-education team working with Scarboro’s first lay mission candidates. He also served in Society leadership as Secretary General and then as Treasurer General until his retirement in 1985. Prior to his death, Fr. Bas made his own funeral arrangements. He asked that the homily be focused not on himself, but on “the Divine generosity by which we are called to be God’s adopted children.”
October 23, 2016 at 5:18 pm Spiritual Reflections, Uncategorized Share via: