Making a difference in the world

This week I attended a youth forum at the Coady International Institute, an organization that has been doing community-based development and leadership education for the past 50 years. The Institute was named after Fr. Moses Coady, founder of the Antigonish Movement, a people’s movement for economic and social justice that began in Nova Scotia in the 1920s. I had the privilege of hearing five students of St. Francis Xavier University speak about their experiences working in Africa this past year. The five interns were part of a Students for Development program sponsored by the Association of Colleges and Universities of Canada.

These five young people just out of their teenage years spoke about working within another culture on issues such as decreasing domestic violence, assisting caregivers of orphans, and helping youth play a bigger role in local governance. Their maturity and insight impressed me, as did how much they learned from their three months in Rwanda, South Africa, Botswana, or Kenya. They spoke of their internship as a life-changing experience.

Matt Chisholm of Antigonish said that before he left Canada he had seen a quote from Nelson Mandela: “As we let our light shine we give other people the permission to do the same.” At the time, he said, he didn’t know what the words really meant, but after spending three months working with a Family 1st Project in South Africa, he did understand. He began to recognize that in working to achieve our own potential we also give others permission to shine brighter.

He said the experience “profoundly transformed the way I live my life and challenged me to burn my brightest.” Such is the power of experiential learning.

In this issue of Scarboro Missions you will read about other young people who have been given tremendous opportunities to walk with communities overseas, living out what it means to be missionary: to give a prophetic witness to God’s love in the world. These, too, were transformative experiences that will stay with them for the rest of their lives and for most, will affect the choices they make in life.

Also in this issue you will read about people who have spent a lifetime following the call to mission. The Grey Sisters of the Immaculate Conception recently celebrated 50 years of service in Consuelo, Dominican Republic. And in Panama, Scarboro Missions this year turned over responsibility of the Interamerican Cooperative Institute (ICI), founded by Fr. Harvey Steele in 1964, to a Latin American Board and staff. Fr. Steele’s dream of opening a centre of education for leaders of grassroots and cooperative organizations came out of his experience of growing up in the coal mining area of Cape Breton, Nova Scotia, and working with the Antigonish Movement as a young priest in the 1920s. Fr. Steele would have been proud of the young people I heard at the Coady this week, nourished by the fruits of the Antigonish Movement.

In a way this issue is about having the courage to set out on an unknown path and discovering that it becomes a lifetime journey.∞ 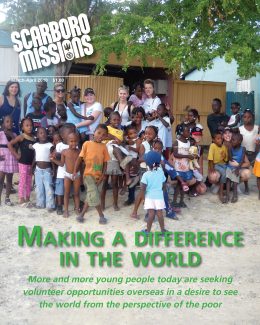