This collection of resources chronicles the Catholic Church’s journey of dialogue with other religions, a journey that began with the Second Vatican Council of the 1960s. Featured here are interfaith stories, theological reflections, and official Vatican documents. Also included are photos and articles detailing the interfaith journey of Scarboro Missions.

In the last four decades, Catholics and Protestants have been seriously rethinking their attitudes towards non-Christian religions. And the Second Vatican Council is now seen as a watershed event in this new openness toward Jews, Muslims, Buddhists, Hindus, Aboriginals and others. Indeed, the Church has come to recognize and respect the presence of grace, truth and holiness in other religions. But more than this, the Church realizes it stands to benefit from dialogue with other spiritual traditions. This conviction is best capsulized in the words of John Paul II: "By dialogue, we let God be present in our midst, for as we open ourselves to one another, we open ourselves to God." 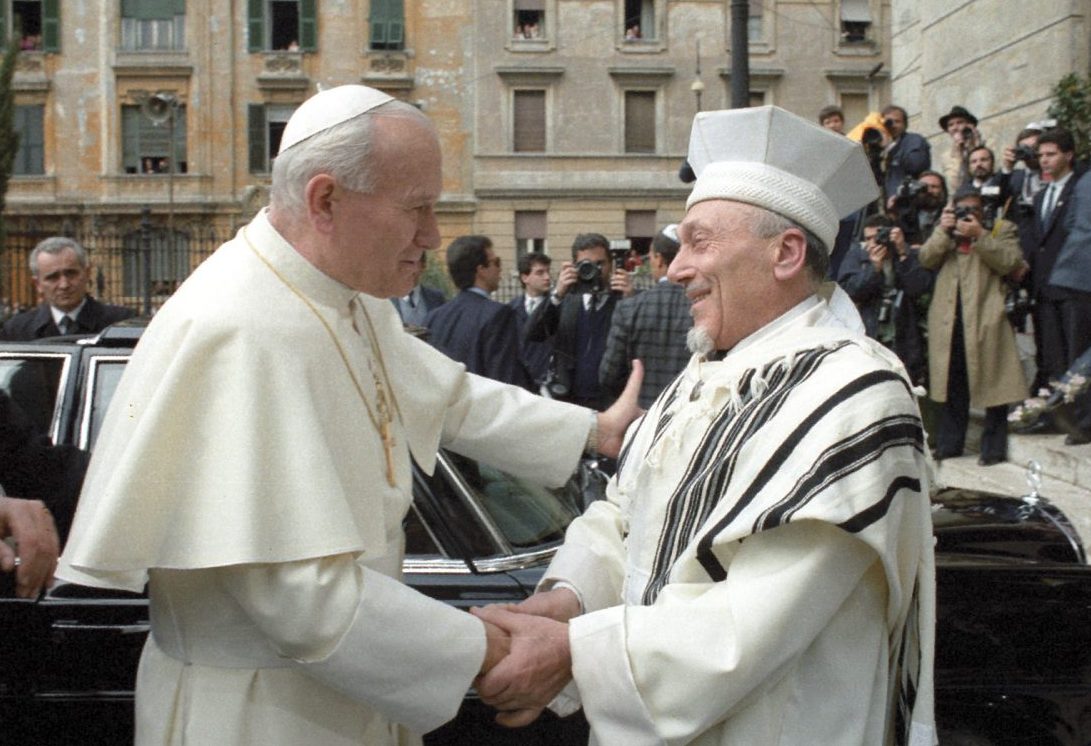 This article profiles the courageous interfaith initiatives of the last four popes as the Church journeys through the uncharted territory of interfaith dialogue. What is particularly striking here are the interfaith breakthroughs engineered by Pope John Paul II. Read this article from the Jan-Feb 2007 issue "Popes lead the way"

John Paul II was one of the most influential interfaith figures of the twentieth century. His commitment to dialogue, his extensive global travel and his acute awareness of our interdependent lives in the global village made him a significant force in the international interfaith movement. This article offers a chronological profile of the interfaith journey of Pope John Paul II from his election to the papacy in 1978 until his death in 2005. To read article, click here. 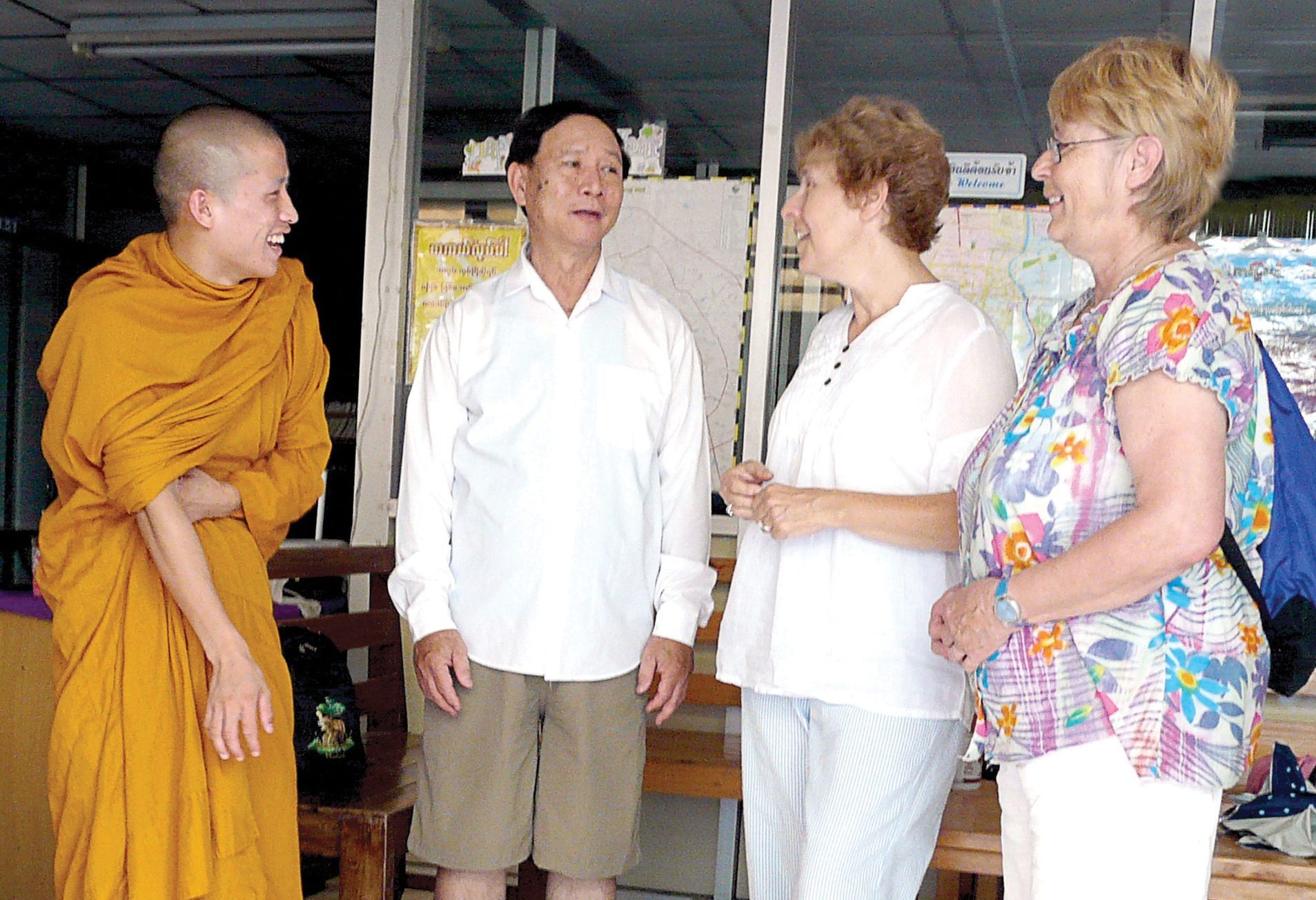 Since Vatican II, an explosion of interfaith activity has occurred within the international Catholic community and at all levels of Church, including lay people, teachers, academics, social activists, monks, missioners, priests, bishops and popes. In 1964, Pope Paul VI began building a Catholic infrastructure to nourish his dream of a Church in conversation with other religions and cultures. This organization, known as the Pontifical Council for Interreligious Dialogue, is active on an international level and has the following goals:

This listing features official Church documents on interfaith dialogue that have been published during and since the era of the Second Vatican Council. Included here are papal encyclicals as well as documents produced by the Pontifical Council for Interreligious Dialogue, by Bishops' Conferences and by Congregations within the Vatican (e.g. the Congregation for the Doctrine of the Faith). To read listing, click here. 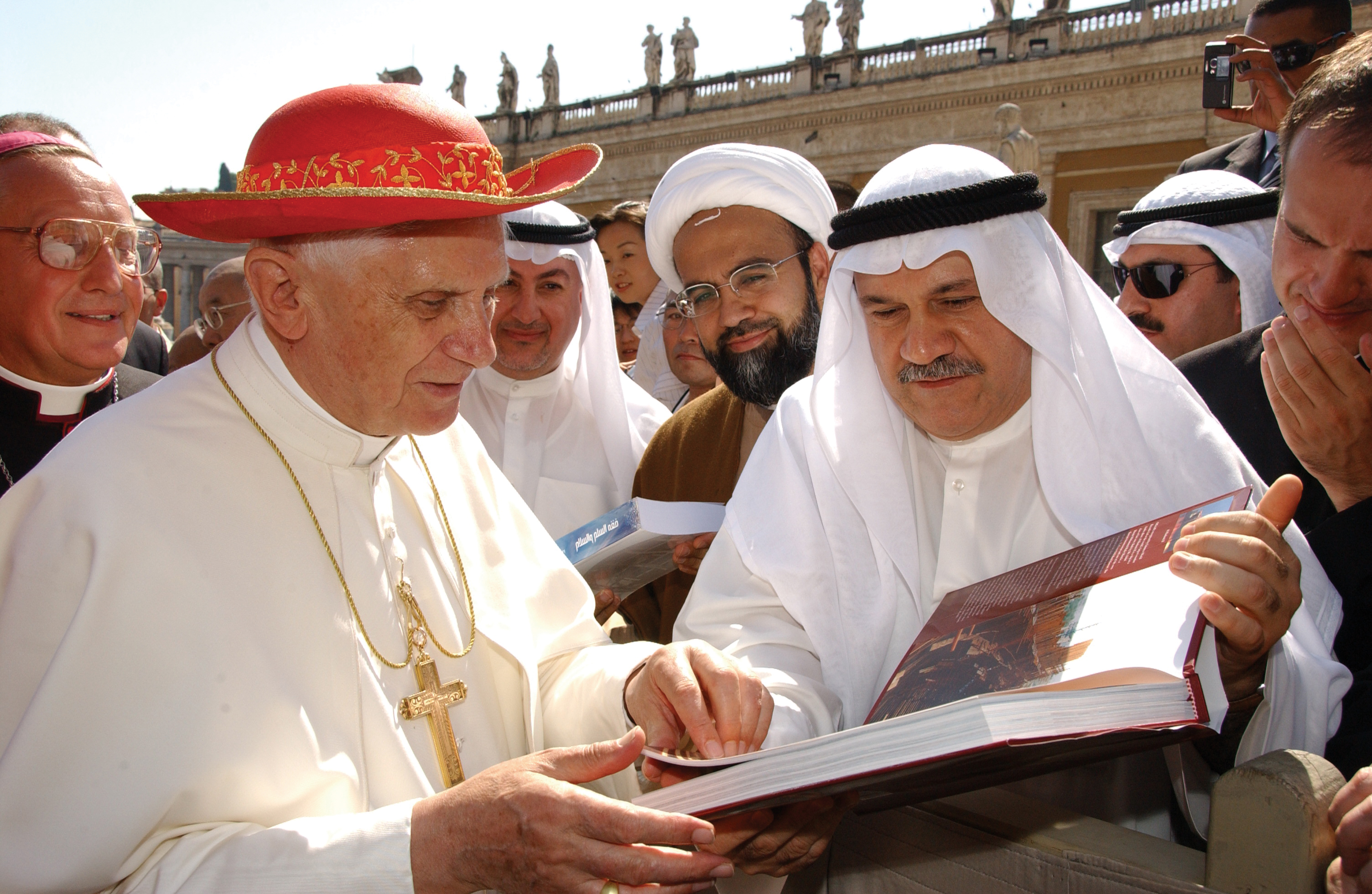 In this short but poignant article, Canadian dialogue theologian, Fr. Ovey N. Mohammed S.J., outlines the Catholic Church's evolving historical stance toward other religions. Before the Second Vatican Council of the 1960s, the Church's attitude toward other religions was negative. Since the Council, the Church's attitude has become much more positive and embracing. Mohammed describes this vital shift and comments on the interfaith challenges faced by modern Catholics. To read article, click here 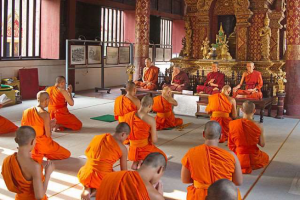 This document chronicles, on a year-by-year basis, the dramatic advances in Catholic-Jewish dialogue since the Second Vatican Council. This detailed profile of significant changes and developments in Catholic-Jewish relations will be very useful to teachers, students, researchers, historians, interfaith practicioners and others. This document can be downloaded free of charge and is available in English and French.

Commission of the Holy See for Religious Relations with the Jews

This important Vatican Commission promotes enhanced relations between the Church and Judaism. The Commission's website outlines the history of the commission and contains links to numerous official documents produced by the Church and the international Jewish community. To visit the website, click here.

In 2016, Scarboro Missions sponsored four interfaith lectures.  Three of these explored the concept of Mercy from Jewish, Christian and Muslim perspectives. The fourth talk focused on Jewish and Christian responses to an important 2015 Vatican document on Jewish-Catholic relations. The texts of all the talks can be accessed below:

A Jewish and Catholic response to the New Vatican Document on Catholic-Jewish Relations – “The Gifts and Calling of God are Irrevocable” (Rom. 11:29)

Featured here are biographies of 30 leaders in the field of Jewish-Christian dialogue – 15 of the individuals profiled are Jewish and 15 are Christian. The biographies feature “pioneers” who were highly active during the Vatican II period as well those who are contemporary voices.
http://www.notredamedesion.org/en/page.php?id=121&T=3
http://www.notredamedesion.org/en/page.php?id=122&T=3

Together, Muslims and Christians form 50 percent of the world’s population. In this article, Canadian dialogue theologian, Fr. Ovey Mohammed S.J., examines the history of the relationship between these two major religions. Mohammed also explores the new levels of cooperation between Islam and Christianity that have occurred since the Second Vatican Council of the 1960s. Read more ... 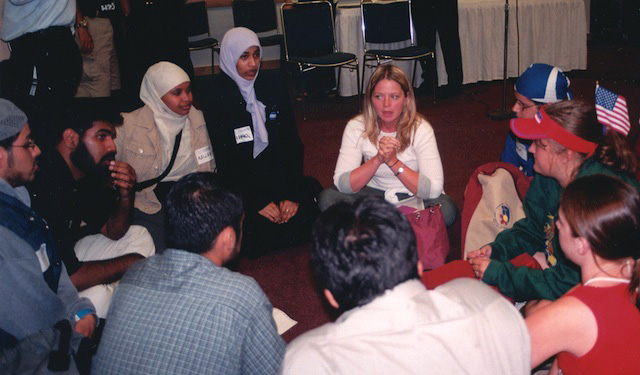 In 2013, Scarboro Missions teamed up with an Islamic Education Center in Toronto for four successful evenings of small-group Muslim-Christian dialogue. To read more:
http://www.scarboromissions.ca/Scarboro_missions_magazine/Issues/2014/Jan_Feb/conversation.php

International Conference of Muslims, Christians and Jews in Turkey

In the summer of 2010, Sr. Lucy Thorson NDS, of the Scarboro Missions Interfaith Department, attended the annual conference of the International Conference of Christians and Jews (ICCJ) which took place in Istanbul, Turkey. Muslims were also invited to participate in and present seminars at the conference. To read Sr. Thorson's report on the gathering, click here

Hindu-Catholic dialogue in Canada -- a photo-essay

Together, Hindus and Christians form approximately 45% of the world’s population. The Hindu-Christian conversation has been happening for decades. The Catholic-Hindu Dialogue of Canada has published a photo-essay which provides an overview of its dialogue meetings, its members, as well as its goals and aims. This dialogue is co-sponsored by the Canadian Conference of Catholic Bishops and Hindu delegates from the Hindu Federation of Canada, the International Society of Krishna Consciousness and other Hindu communities. You can view or download this photo-essay in English and French:

US Bishops and the World Sikh Council (America Region) meet in New York for the first Catholic-Sikh national consultation in US history. (2006) The Vatican was represented by Monsignor Felix Machado (third from right, back row), Under-Secretary of the Pontifical Council for Interreligious Dialogue. Visitors to a Sikh temple must remove their shoes and wear a head covering as a sign of respect for God.

This committee of bishops and ecumenical experts promotes the ecumenical and interfaith efforts of the Catholic Church in the United States. The committee's website contains a wealth of resources as well as numerous links to important documents featuring the Catholic Church's dialogue with other religions in the United States and around the world. To visit the website, click here.

During the interfaith prayer service at Assisi (2002), ten of the 200 faith representatives each read one of the following ten commitments in their own language. In March, Pope John Paul II sent a copy of the Decalogue for Peace to all heads of state. In an accompanying letter, the Pope stated that the participants at the Assisi gathering were inspired more than ever by one common conviction — humanity must choose between love and hatred.

Christian Witness in a Multi-Religious World

In 2011, this 5-page document was jointly published by the the Pontifical Council for Interreligious Dialogue (Vatican), the World Council of Churches and the World Evangelical Alliance. Together, these bodies represent 90 percent of the world’s Christians. The purpose of the document is to address practical issues associated with Christian witness in a multi-religious world. The document encourages churches, church councils and mission agencies to reflect on their current practices and to use the recommendations in the document to prepare their own guidelines for their witness and mission among peoples of different religions and among those who do not profess any particular religion. To read or download the entire document, click here.

How do Christians understand other religions?

In an excellent paper entitled, Thinking Theologically about Other Religions: Christian Theologies of Religions, American theologian, David R. Brockman, does two things. He, first of all, surveys Church history to enlighten us as to how Christians have addressed the issue of other religions in the past; and, second, he provides a wonderful outline of how modern Christian theologians are wrestling with this challenging question. To view or download this paper, click here.

In 1984, the Vatican's Secretariat for Non-Christians issued a document entitled The Attitude of the Church towards the Followers of Other Religions (Reflections and Orientations on Dialogue and Mission). The document described interrreligious dialogue in this way:

"It [dialogue] means not only discussion, but also includes all positive and constructive interreligious relations with individuals and communities of other faiths which are directed at mutual understanding and enrichment."

This attractive poster features key milestones in the Catholic Church's interfaith journey from the Second Vatican Council to the present. To view or download free of charge, click here 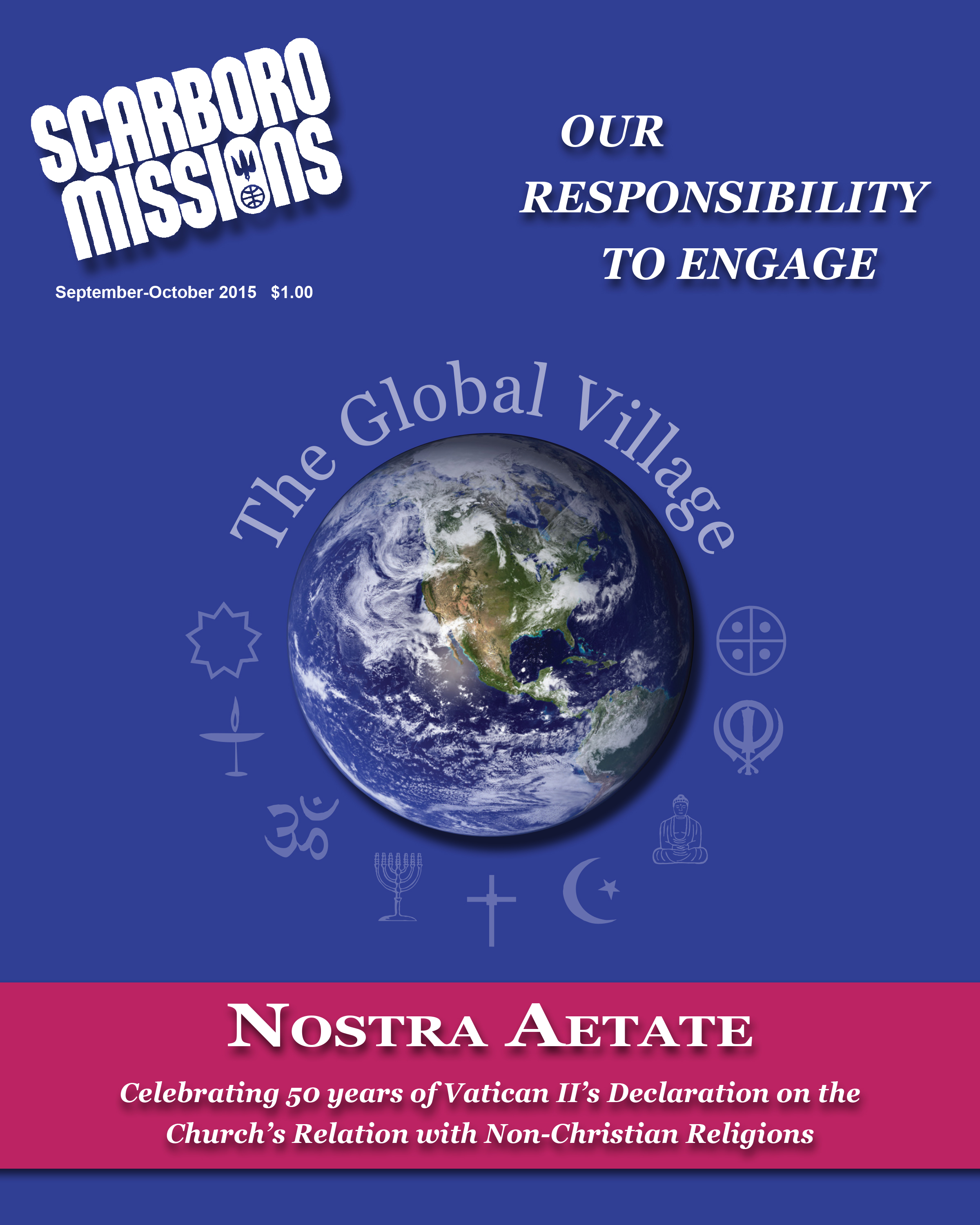 Below please find links to various interfaith editions of Scarboro magazine. These magazine issues chronicle growing Catholic involvement in interfaith work around the world, a development that began with the Second Vatican Council of the 1960s. Also featured here are papal interfaith initiatives as well as the interfaith work of Scarboro Missions.

These four directories feature interfaith organizations in various part of the world. As you make your way through these directories, you will see the dramatic growth of the international interfaith movement as well as an abundance of Catholic interfaith activity: