Last August I traveled to Brazil to experience firsthand the struggles of the poor. Wearing two hats, one as editor of Scarboro Missions magazine and the other as a member of the Canadian Catholic Organization for Development and Peace, I took part in a Development and Peace solidarity visit to the state of Pernambuco in Brazil’s northeast. We visited D&P partners who are helping people to better their lives.

Scarboro’s connection to Brazil goes back to 1961 when the first Brazil mission team arrived in the town of Itacoatiara on the Amazon River. The new Canadian missioners were soon to be influenced by the Second Vatican Council, Fr. Ron MacDonell writes, and later by the “preferential option for the poor” adopted by the Latin American Bishops at their 1968 conference in Medellin, Colombia. Fr. Omar Dixon recalls that along with pastoral duties, they began accompanying the people in their struggle for better health and education, for indigenous and land rights, for the preservation of the fish and the rainforests.

The missioners supported the Base Christian Communities that were springing up all over Latin America. “As the people gathered in community to reflect on their life situations with the help of the light that comes from the Word of God, they discovered their dignity as human beings and sons and daughters of God.” Scarboro’s Bishop George Marskell, Bishop of Itacoatiara, wrote these words in 1996, just three years before he died of pancreatic cancer, ending his 37 year journey with the people of Amazonas. “The strength that comes from unity,” he said, “led to action in transforming the unjust structures of a society dominated by a privileged class. The Church, to be faithful to the gospel, made an option for the poor.”

During our visit last August, it was apparent that the situation in Brazil is improving for many, yet millions still struggle for land and life. We were to meet some of these people and hear their stories.

Each morning we set out to the offices of a different Development and Peace partner organization. They gave generously of their time, presenting their social analysis, the issues they work on, their challenges and successes. After the office visits, one or two staff from the organization took us to meet the communities they were accompanying.

In the 12 days, we visited a youth communications centre with young people who are learning skills in photography, web design, and videography. They are using these skills to depict, for example, the amazing folk dances they are reviving as well as the harsh reality of crack cocaine use in the favelas (slums) where they live. They spoke to us about becoming instruments of change.

We visited new urban housing complexes for people who once lived in favelas. We met with rural families struggling for land and others who have gained land title after years of intimidation, hardship, and violence.

We were welcomed by communities of descendants of escaped slaves who are fighting against the construction of a hydroelectric dam that would submerge their 300 year old villages.

Everywhere we visited, I noticed that the staff who accompanied us did not speak on behalf of the people.  Rather the community members did all the talking. They knew the issues, they were informed, political, and active. They were some of the bravest people I had ever met.

I thought, too, about the courage of Bishop George Marskell (Dom Jorge), Dom Helder Câmara, Sr. Dorothy Stang who was martyred in 2005, and other bishops, priests, sisters, and lay people who have lived the “preferential option for the poor,” standing firmly on the side of the Brazilian people and taking part in their struggle for life. “Yahweh has sent me to bring good news to the poor, to bind up hearts that are broken, to proclaim liberty to captives.” (Isaiah 61) Today, the Brazilian Bishops Land Pastoral Commission, founded in 1975, continues to support communities in their struggle for land.

Development and Peace, founded by the Canadian Bishops in 1967, has also made an option for the poor, supporting partners who are on the front lines—in the favelas, fields, and rainforests, working to bring dignity and hope, working to build a world of justice and peace.

For me, this visit to Brazil was a journey of hope.∞ 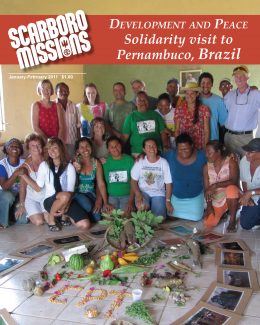