Vocation… not simply a choice of occupation

It is, of course, normal for people to define their main occupation, whether that be carpenter, teacher, parent, religious sister, priest or lay missionary, as their vocation. The most common definition of the word, in a religious sense, is just that: a divine calling to a particular occupation.

Dorothy Day, founder of the Catholic Worker Movement, had worked to provide community for inner city poor for nearly half a century when she was asked about her vocation. She answered, “If you start praying ‘Lord, what will you have me do?’ you will find yourself doing a lot more than you thought you would.”

Her answer implies a more dynamic understanding of vocation than simply a choice of occupation. What she expected of seekers was that we constantly be discerning the answer to the question, “Lord, what would you have me do?”

My own conscious yearning for vocation led me to Scarboro Missions when I was a young man of 28. From the Philippines where I was engaging in a ministry of presence to an animistic tribal people, I once wrote an article on my calling and said: “It is the search that is important. During this search I have learned so much from the Manobo, from my companions, from the Filipino people who apply Jesus’ teachings to their struggle for liberation.”

Daily prayer was an important part of my life in those days. It had to be! So much was new, so much was challenging, so much depended on choices I was making. If I was not in touch with what God was asking of me, I could easily lose my way.

While I often define my job with the Canadian Catholic Organization for Development and Peace as my vocation, I realize I have a lot to learn from Dorothy Day, not to mention from my younger self… Dorothy Day challenges me not to be content in the vocation I have arrived at, but to recover the attitude that makes vocation an ever-present search for God’s will for me, to shine the light of the Holy Spirit onto everyday decisions.

For a vocation to be authentic, it cannot just be a title to go with a name. It requires being in touch with God and bringing personal and even communal prayer to bear on moments of decision. Such moments can be significant opportunities to deepen one’s vocation. As I read the articles contained in this issue of Scarboro Missions, I am struck by how many individual moments of decision are described.

We read about protesters at a logging blockade deciding to feed the truckers on the other side of the picket line; about a lay missioner deciding to hold a meeting so that work on an important project can proceed in harmony; about a woman bravely deciding to confront an oppressive situation. All are decisions that authenticate the vocations of those making them.

Lori Neale, in her article in this issue, quotes the educator Parker Palmer when she writes, “In ministry it is easy to fall into the trap of functional atheism, that is: we confidently profess our belief in God, yet operate in the day-to-day mechanics of life as atheists.”

These are arresting words. They immediately make one consider how the idea of vocation can be compromised. They offer a challenge for us to be consistent in all aspects of our lives: our occupation, our relationships, our leisure and so on, if we truly believe in God. Overcoming the trap of functional atheism is a worthy challenge, but one that cannot be done without communicating with God.

As we seek to live out, to deepen and to broaden our own vocations, let us pray “Lord, what will you have me do?”∞

Danny Gillis is a former Scarboro lay missioner who served in the Philippines for four years. He joined the Canadian Catholic Organization for Development and Peace in 1992 and is presently animator for the Atlantic region. 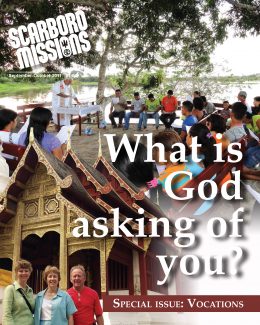