Preparing this issue on Vatican II to mark the 50th anniversary of its opening has been a huge and wonderful learning experience for me. I have been living a new way of being Church for so long that I no longer think about how it all came about.

I do remember as a child wearing a veil to Mass and kneeling at the altar rail to receive Communion; it was a time when the entire liturgy was said in Latin and by the priest only. In my teenage years, after Vatican II, all of that changed. I remember studying Simon and Garfunkle’s The Sounds of Silence in high school religion class. Looking back, I can appreciate the Sisters’ attempt to help us apply the Gospel to our time and to our world.

Certainly the changes we experienced were far greater than that. Edward P. Hahnenberg in his article, Treasures of Vatican II, writes:  “If you’ve ever taken part in a Bible study, witnessed the Easter Vigil liturgy, served on a parish council or as a Eucharistic minister, attended a non-Catholic worship service, reflected on politics in light of your faith, read about a statement from the bishops’ conference, picked up the Catechism of the Catholic Church, volunteered for a parish service project…If you’ve done any of these things, you’ve experienced the effects of the Second Vatican Council.”

For some of us, the transformation may run deeper still. But have we recognized the influence of Vatican II?

I am deeply grateful to the esteemed and learned writers who have willingly shared their knowledge and experience of the Council in this issue of Scarboro Missions. Two write from firsthand personal experience, having attended the Council: Bishop Remi De Roo as a Council Father and Gregory Baum as a bishop’s peritus, or theological expert.

Fr. Peter Henriot, S.J., writes about the rich teachings of Vatican II documents such as Gaudium et Spes (The Church in the Modern World), which influenced his involvement in key justice and peace work and his commitment to the struggling people of Africa where he has been living for the past 22 years.

The transformation experienced by religious communities of women after the Council is outlined by Sr. Ellen Leonard, C.S.J. Yes, there were struggles, but Sr. Ellen tells us that a substantial number of Sisters “embraced the challenges of living as women religious in the post Vatican II church. For the generation that came of age during Vatican II, life would never be the same.”

From his vantage point as Director for Ecumenical and Interfaith Affairs at the Archdiocese of Toronto, Fr. Damian MacPherson, S.A., writes about the Church’s commitment to interreligious dialogue, which began with the watershed Vatican II document, Nostra Aetate.

Many look at the 50th anniversary of the opening of Vatican II as an opportunity to give renewed attention to the study of the council and its teaching. One such initiative is the Centre for Vatican II and 21st Century Catholicism at St. Paul University in Ottawa, directed by Catherine Clifford who writes that the Council “can be counted as the most important event in the last century of religious history.”

May this issue of Scarboro Missions help to open our eyes to the treasure that is Vatican II, to reawaken in us a deeper understanding of its vision and to recall, in the words of Fr. Jack Lynch, what the Spirit of God revealed to us at that Council.∞ 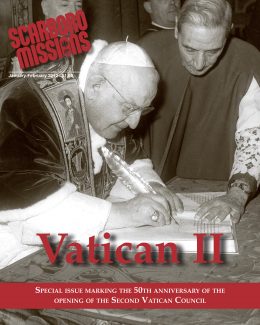