Whom shall I send?

The writers in this issue are passionate about justice—justice for the poor and justice for the Earth. In the first article, Fr. Bill Ryan, special advisor to the Jesuit Forum for Social Faith and Justice in Toronto, writes about Justice in the World, a document issued by the Catholic bishops synod in 1971. Fr. Ryan reflects on their challenging core message: “Action on behalf of justice and participation in the transformation of the world fully appear to us as a constitutive dimension of the preaching of the Gospel.”

Retired Bishop Benedict Singh of Georgetown, Guyana, with whom Scarboro missioners have served for many years writes about politics and religion. “Private Christianity is an illusion,” he says. Our faith demands that we not only alleviate the results of oppression, but also eliminate the causes of oppression. He writes that we are all called to become informed, active, and responsible participants in the political process.

Retired Bishop Anthony Dickson of Bridgetown, Barbados, also a good friend to Scarboro, is deeply concerned about the threat to the planet. “If planet Earth is to survive,” he writes, “humans must undergo a fundamental transformation in the way we view ourselves and other creatures.”

Bishop Dickson refers to the pastoral letter on the environment issued by the bishops of the West Indies. They write that the present crisis calls for a Christian spirituality that helps us to understand our place within creation and accept, nurture, and celebrate the diversity, beauty, interdependence, and innate worth of all creatures. They write: “All creatures, humans and otherwise, were ‘made from the soil,’ i.e. they are flesh. In Christ, God entered into unity, not only with human beings, but also with the entire visible and material world. As a result, humans and all creation have been raised to a new dignity.”

When we continue to hear about the suffering of the poor and the suffering of the Earth, we are sometimes left feeling overwhelmed, angry, and helpless. However, we are hopeful people, people of the resurrection. I remember a powerful story written by Sr. Judy Donovan in our March-April issue last year. She told us about struggling sharecroppers in Brazil in the 1970s who stood up to their landlord and as a result the landlord sent his goons to burn their fields and confiscate their livestock. Their spokesperson, Don Carlos, and his family were thrown in jail. It was Good Friday. We wonder how this story could possibly have a happy ending. What happened next was Sr. Judy’s first experience of faith in action. Churches, unions, and cooperatives held meetings and formed alliances. People got the word out, creating public pressure from Brazil and from international friends. Not only was the family released, but regional land reforms followed, changing the lives of thousands of landless people.

I hope this issue helps you to respond to your faith with hope, like the people in San José de Ocoa, Dominican Republic, whom you will read about. They are helping themselves through community development based on solidarity and the belief in God’s desire that “they may have life and have it to the full” (John 10:10).

May you respond like the high school students in the D.R.E.A.M.S. feature who did service volunteering in San José de Ocoa. Walking with people in the developing world even for a short time is a transforming experience of solidarity.

Scarboro Missions is also offering a tremendous opportunity for young people to volunteer overseas. Youth aged 22 to 35 can live out their faith as a Scarboro missioner in Guyana. The program, starting in July 2013 until June 2014, is a chance to gain valuable experience for cross-cultural employment, to learn about social justice, and to participate in interfaith dialogue and cultural exchange. The deadline for applications is April 26, so act now and contact us today. The ad for this short term mission opportunity is on the back cover of this issue.

Some opportunities are aimed at young people, but there are many other invitations, no matter what our age, to come together, connect with others, and stand up for the suffering poor and the suffering planet. The articles in this issue challenge us to live a faith that does justice and to understand that the Church’s mission is to transform the world, a most beautiful living, breathing, spectacular world, one that we know is gashed and bleeding. We are invited to take part in this incredible mission. God asks, “Whom shall I send?” Can we refuse?∞ 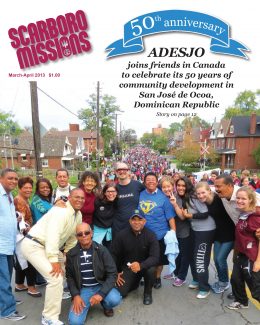