An invitation to mission

We open this issue with a story from Fr. Mike Traher about his visit to Lishui, China, earlier this year. There he met several small, faith-filled Catholic communities, a result of the efforts of Scarboro’s early missionaries and the Grey Sisters of Pembroke who accompanied them. The missionaries’ work in China ended in 1949 when the Communists came to power and expelled all foreigners.

Fr. Mike learned from elders in the communities that when the soldiers came they punished any Chinese who worked for or assisted the missionaries. This was especially true for Paul Kam, a Chinese national who had become a Scarboro missionary priest. Fr. Kam suffered eight years of harsh confinement and died just months after his release. He was 61 years of age. To me his story is one of martyrdom.

Scarboro Missions honours the effort and sacrifice of those early missionaries, but since those years, the lived experience of missionaries has contributed to a profound transformation in the Church’s understanding of mission. In his article, Fr. Jack Lynch explains how this change came about and what mission means today. “When we were founded, geographical boundaries were of great importance,” he writes. “Serving God’s mission today involves crossing boundaries, borders, and barriers, most of which are not geographical but rather represent divisions among people.”

Mission is about participating in building the Reign of God as described in the Beatitudes. And the Spirit continues to invite us to take part in God’s mission—to be people of peace, to be merciful, to hunger for righteousness, to walk with the poor, to be a voice for the voiceless, to reach out to those on the margins of society, and to see all creation as sacred.

This summer, Fr. Shawn Daley accepted this invitation and was ordained for Scarboro Missions. New lay missioner Donna Joy Tai also accepted the invitation. Both Fr. Shawn and Donna are missioned to Guyana and Donna writes of her experience as a new missioner there.

Mary Olenick remembers mission life in Malawi and her friend Fr. Edmond Nyoka, a Malawian priest, gives us a glimpse of his life in service to the people of God in Malawi.

Former lay missioners Maxine Bell and Dorothy Novak also recall their experience of mission and the ways in which their lives have been irrevocably changed.

Yes, mission may not be as it was for the early missionaries to Lishui, China, but it continues to be a life-changing journey and all are called, whether we stay here at home or go to another land and culture. In this issue of the magazine, Scarboro Missions is inviting you to walk with us. As Pope Francis has said, “It is worth saying yes to God.”∞ 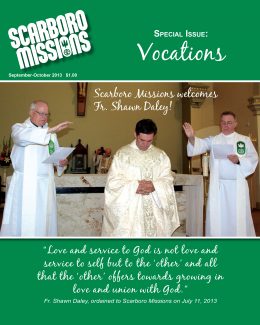