The ways of mercy

In the glaring light of Divine Mercy, we are all revealed as both undeserving and blessed

Pope Francis’ little but mighty book, “God’s Name is Mercy,” is one of the most beautiful and brilliant expositions of Christianity I have ever encountered. He brings us back to the indisputable essence of our faith and reclaims the primacy of mercy. Mercy erases borders, demolishes walls, and builds bridges. I intend to keep this precious little book close at hand. It has given me much to ponder.

I initially found his message hard to grasp because we are influenced by a culture immersed in a reward/punishment system, one that places judgement over mercy. Judgement is easy because it is clear: black or white, right or wrong. Anything other than judgement feels like a cop out. Fr. Richard Rohr says that judgement appeals to the ego, which likes nothing more than to feel separate and superior to others. Judgement gives us a false sense of power and control. Being fashioned into the clay of this mindset and hardened over time, we project our way of being onto God. Rohr perceptively remarks that “God created us in His image and we returned the compliment by creating God in our image.” In our image, God becomes the God of Judgement who is constantly making his list and checking it twice to see who is naughty and nice.

It is no wonder that I struggle to grasp the centrality of mercy and its profound implications. I need to rid myself of the toxic image of God fabricated by my human mind. I need to let go of my addiction to certainty, to control, and to superiority, and plunge myself into the ocean of Divine Mercy. Only in this way can Divine Mercy penetrate my judgemental heart of stone and refashion me so that I can be a channel of transformative love.

A higher level of consciousness

Pope Francis’ affirmation of mercy is a bridge to help me get there. The Jubilee Year of Mercy is essentially a pressing invitation to move to a higher level of loving consciousness that defies human logic and common sense. We are called to move away from a consciousness that is rooted in a sense of scarcity, marked by stinginess, forever measuring, weighing, and judging who is worthy and who is not—making sure that people get what they deserve. This consciousness is driven by fear and inevitably creates borders that separate and exclude. It insists on a world of meritocracy, in which people are rewarded only for their ability and achievement. This way of being gives us the illusion that we are in control, in the right, and have our act together. However, this illusion comes at a great cost as it blocks the flow of Divine, lifegiving, “refreshing” mercy, a word used by Jane Sagar, a participant at Scarboro Missions’ recent retreat on mercy.

A higher level of loving consciousness is rooted in a sense of abundance that finds expression in a joyful spirit of generosity. This is the consciousness that Jesus sought to instill through his parables of celebrating and feasting at the return of the undeserving, in the finding of unexpected treasure, in the outpouring of wine from water, and in the multiplication of the loaves and fishes. All of this shatters our painstakingly neat, rational distinctions of the worthy and unworthy. In the glaring light of Divine Mercy we are all revealed as both undeserving and blessed. Once we allow ourselves to experience the unconditional, limitless flow of Divine Mercy, we are propelled out into the world to become bridge builders of mercy.

To allow ourselves to be led to this higher level of consciousness is no easy feat. It helps to realize that we are not alone. God, whose name is Mercy, is forever at the threshold, like the father of the prodigal son, awaiting the very sound of our footsteps to rush out and enfold us in His loving embrace. Pope Francis goes even further and states that even if we cannot take any steps in God’s direction, if we simply desire to move in that direction God will be there to engulf us in His liberating Mercy.

Each one of us must find the spiritual means and tools to move into the unfamiliar, borderless, and transforming territory of a higher loving consciousness. I am particularly drawn to the parables of Jesus that seek to enflesh and usher in Jesus’ vision of the Kingdom of God. These logic-defying descriptions of God’s Mercy have the sacramental power to lead us to a level of consciousness whereby we can begin to glimpse the Kingdom.

Most importantly, I am longing for a prayer life that will effectively nudge me towards this level of consciousness and keep me returning to the eternal fount of Divine Mercy. I seek a prayer life that moves me beyond my limited self, transforming me into the face of Mercy and keeping me in the flow of Love. I feel called to a prayer life that draws me away from my self-preoccupations and sends me out into the world to be merciful as God is merciful.

In seeking to develop such a prayer life, I have been blessed to be introduced to the forgotten traditional practice of Christian Meditation as taught by Fr. John Main and Fr. Thomas Keating. It is a form of prayer that moves us beyond the noisy chatter of our judgemental minds. This form of prayer holds the possibility of Divine transformation by calling us to abide in the inner presence of the Loving Trinity.

Mercy by its very nature flows out, builds bridges, and leads to transformative encounters with the “other.” The Mercy of God is unlimited and inexhaustible—a wellspring upon which Jesus drew and which is freely available to all.∞

Kathy Murtha coordinates Scarboro’s Mission Centre, a meeting place for groups and organizations. The centre also offers and facilitates retreats and workshops, including the weekly program, “Centering Prayer and the Spiritual Journey.” 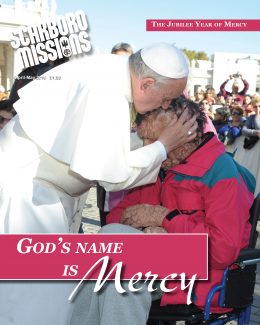