“The Church respects and esteems these non-Christian religions because they are the living expression of the soul of vast groups of people. They carry within them the echo of thousands of years of searching for God.” Pope Paul VI, Evangelization in the Modern World, 1975

Why is Scarboro Missions involved in interfaith or interreligious dialogue? The question is very valid and I would like to respond to a few of the common concerns that we hear from some of our supporters and other members of the Catholic Church.

Our experience at Scarboro has taught us that many Catholics are unaware of the initiatives of the Popes and the leadership of the Church in the last 45 years since the Second Vatican Council. I invite you to read the articles in this issue and to spend time with the material on “Catholic Milestones in Interfaith Dialogue”outlined in the centrefold. It is a wealth of information and for some I would guess that it might be surprisingly new information.

At Scarboro, our commitment to interfaith dialogue has grown for a variety of reasons. First of all, we respond as a Catholic community in mission to the leadership and guidance of the Church beginning with Pope John XXIII to the present. Secondly, we are motivated by our own collective experience in global cross-cultural mission over the last 90 years and our contacts and friendships with many people of other faith traditions where our members have lived and worked.

Thirdly, with modern communication, mobility, and immigration we no longer live in isolation from other peoples and religions nor should we live in isolation. Since our founding 90 years ago our world has changed dramatically and so must we. We must come to know and love our neighbour as Jesus taught, but for today’s world. We ought to remember that Jesus engaged in the same kind of dialogue with people of other traditions and beliefs other than his own and even presents some of them as models of faith.

Some Catholics have expressed concerns about engagement in this kind of dialogue and also about what it means. In the Vatican document, Dialogue and Proclamation (1991), proclamation of the Gospel and interreligious dialogue are seen as distinct but related activities within the mission of the Church. Church teaching in Dialogue and Proclamation and also in Redemptoris Missio (RM), the 1990 mission encyclical of John Paul II, state clearly that “inter-religious dialogue is part of the Church’s evangelizing mission.” (RM 55)

I firmly believe in the observation of Pope John Paul II that interfaith dialogue is not done as a tactical move of self-interest but “is demanded by deep respect for everything that has been brought about in human beings by the Spirit who blows where He wills.” (RM 56)

My strong expectation is that Christian hope would radiate through to all in every dialogue. It must be a hope that emanates from a deep personal relationship with Jesus and what he is for the Christian. Dialogue in turn must reflect an authenticity in our Gospel witness—we must be followers of Jesus not only in what we say but in the witness of our lives.

An exchange of beliefs

True dialogue is an occasion for a sincere, honest exchange of beliefs during which the participants listen intently and respectfully with an openness to learn, to understand, and to appreciate the belief of the other. My personal conviction is that it is essential that everyone speaks in the first person singular so that the participants give a personal testimony of their beliefs.

If I am speaking with a person of another religious tradition, I express what I believe and I respond to any question as honestly as I can. In a dialogue, one does not dilute or accommodate one’s belief to the listener. If that is the case it really isn’t a true dialogue.

Dialogue must be both truthful and respectful. This is very demanding because it challenges me to state in my own words what I believe. It is as if I am invited to respond personally to the question of Jesus, “Who do you say that I am?” Then I begin to speak in the first person about my belief in Jesus, his teaching, and his revelation of God.

Dialogue leads to an enrichment of my faith. Pope John Paul II expressed it so beautifully when he said, “By dialogue we let God be present in our midst, for as we open ourselves to one another, we open ourselves to God.” So often in the Gospel accounts we hear Jesus admonishing his disciples to not be afraid or fearful and I believe that we need to have the same trust and openness when we dialogue with another. We believe that one of the goals of interfaith dialogue is a deeper turning to God by each partner in the dialogue.

Another concern that we hear is that dialogue leads to relativism, the perception that as Christians we are placing Jesus and other religious leaders on an equal footing. We state unequivocally that as Christians we believe in Jesus, His mission, and our salvation. At the same time, we also believe what the Catholic Bishops stated in 1974 at the Synod on Evangelization: “We wish to foster dialogue with non-Christian religions, so that we may reach a better understanding of the Gospel’s newness and of the fullness of Revelation.”

God’s presence in the world

Ultimately, the foundation for all dialogue and missionary activity is the conviction that “mission is first and foremost God’s presence and activity in the world.” It is “missio Dei”—God’s mission. That is the first and primary principle that Pope John Paul II reminds us of in Redemptoris Missio, his encyclical on mission activity. He reminds us that the Spirit of God is the source and author of mission. We are called to participate in an historical project that comes from God and belongs to God.

When we do so, we do not begin from nothing for we recall that we live in a world in which the Spirit of God is already operative. God is already present in the peoples, cultures, and faith traditions of others. God is present everywhere before us and salvifically active in ways unknown to us.

Our first step then is contemplation and discernment of the action and movement of God in history, i.e. to discover God’s missionary agenda. One of the ways is through dialogue. Michael McCabe, SMA, a priest of the Society of African Missions, speaks of mission as an encounter with a mystery: “the mystery of a missionary God whose love embraces the world and all of its inhabitants; the mystery of the Spirit of God present in unexpected places and unsuspected ways because of the limits of our own life experiences and our own cultural world; the mystery of people’s participation in the paschal mystery in ways we have neither known nor imagined due to our limited religious experience or our experience of God from the perspective of our own culture.”

Dialogue is key to understanding our role in God’s missionary agenda. God speaks and we listen and respond to God’s invitation. In this context, I can’t emphasize too much the importance of interreligious dialogue and its significance for mission today. As the Asian Bishops stated in 1978 in Calcutta concerning dialogue with the great religions of Asia: “Sustained and reflective dialogue with them in prayer will reveal to us what the Holy Spirit has taught others to express in a marvellous variety of ways.”

I believe that the Holy Spirit is both the inspiration and the guide in true interfaith dialogue. The Spirit is leading us to the truth and to reconciliation. In Delhi, India, in 1999, Pope John Paul II expressed his “hope and dream that the next century will be a time of fruitful dialogue, leading to a new relationship of understanding and solidarity among the followers of all religions.” Let that hope continue to motivate all of us.∞

Fr. Jack Lynch is the Superior General of Scarboro Missions. 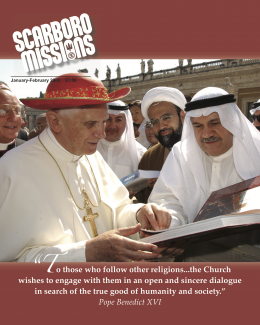