An invitation to conversion

Fifty years ago Pope Paul VI’s great encyclical Populorum Progressio challenged Christians to see the world through the eyes of the poor. In this Lenten issue of Scarboro Missions, we are reminded of this shift in the Christian perspective and are asked to add to it a new dimension: care for our common home, the Earth.

In his encyclical Laudato Si, Francis invites all the people of the world to undergo an ecological conversion. He says, “We are not faced with two separate crises, one environmental and the other social, but rather one complex crisis which is both social and environmental.” Nature cannot be regarded as something separate from ourselves, the Pope says. “We are part of nature.” He argues in favour of an approach he calls integral ecology: “Strategies for a solution demand an integrated approach to combating poverty, restoring dignity to the excluded, and at the same time protecting nature.”

In this issue Karen Van Loon writes about the Pope’s call for a change of heart—for mercy—for our common home and for all creation living together on this planet. We also feature Pope Francis’s efforts to bring together and hear the voices of the world’s popular movements—people who thirst for justice, who struggle against what he calls “the prevailing paradigm…a system that causes enormous suffering to the human family, simultaneously assaulting people’s dignity and our Common Home in order to sustain the invisible tyranny of money that only guarantees the privileges of a few.”

The voices of Indigenous peoples are also heard in Kathy Murtha’s reflection on the KAIROS Blanket Exercise, a powerful teaching of history from the perspective of Indigenous peoples in Canada. Fr. Ron MacDonell writes too about the Tukano community in Manaus who embrace faith, hope, and love amidst situations of injustice. In Laudato Si’, Pope Francis says, “…it is essential to show special care for indigenous communities and their cultural traditions…For them, land is not a commodity but rather a gift from God and from their ancestors who rest there, a sacred space with which they need to interact if they are to maintain their identity and values.”

We present, too, women’s voices and perspective in the Development and Peace Share Lent 2017 Way of the Cross: Women at the heart of change.

This issue is filled with stories of people who hear the cry of the poor and the cry of the Earth. At Lent, we are invited to conversion, to a change of heart. As an essential part of this conversion, Pope Francis reminds us to engage in “grateful contemplation of God’s world.” To enter into the spirit of this invitation, and to this issue of Scarboro Missions, we invite you to meditate on a beautiful poem by Kate Marshall Flaherty, “Radical Lent 2017.”

In memory of Scarboro missionary Fr. Gerry Donovan, we wish you blessings on this Lenten journey and may peace be with you! 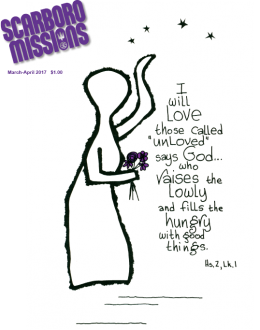