It was early Sunday morning in Fox Leg Village, a small community of about 700 Makushi people located on the savannah plain of northern Brazil. From the small thatched-roof church came the sound of sweeping. I knew it was most likely one of the catechists, preparing for Mass. By 8 am the church of St. Isidoro was full, the men sitting on one side and the women on the other, as is the Makushi custom. The people were typically quiet, except for the occasional cry from a baby nestled in a mother’s arms. We celebrated Mass in a combination of Makushi and Portuguese, reflecting the linguistic needs of the community: some of the older people speak only Makushi, and some of the young people speak only Portuguese. All of the people prayed reverently and the young people, talented singers and guitar players, added joy to the celebration. At the end of the Mass, catechists spoke on the Word of God, including several Makushi elders who, though illiterate, shared their faith passionately.

The Makushi people were evangelized in the early 1900s by Benedictine and Jesuit missionaries who trekked on foot and travelled by horseback to the communities. The Makushi converted to Christianity and were baptised into the church. The missionaries translated prayers such as the Our Father, the Hail Mary and the Creed into Makushi. Today the older people remember these missionaries with great fondness.

By the time I arrived among the Makushi in 1993, mission had changed. Conversion was no longer the primary goal. Since the early 1970s, the Makushi had been struggling to regain their traditional lands, invaded by cattle ranchers and rice plantation farmers. The few health clinics in the area were poorly stocked, and schools consisted of one-room huts. Makushi children were dying of malnutrition.

Hearing the cry of this suffering people, the Church made an important option to accompany the Makushi communities in their quest for land, health and education. I was among the many missionaries who walked with the people as they confronted the unjust authorities and demanded their basic rights.  Makushi leaders were killed, some missionaries and federal police were kidnapped, and we all faced death threats. The Church was living the mission of Jesus: “I have come that they may have life and have it to the full” (John 10.10).

My specific task was to put my linguistic training to use by helping teachers and catechists to produce dictionaries, radio programs and publications of traditional Makushi stories. When the Makushi finally had their land reserve recognized by the federal government in 2005, they made language revitalization a priority. Like many indigenous groups, they are very aware of the importance of language in determining and preserving cultural identity.

Now back in Canada to serve in leadership on the General Council, I have been reflecting on the meaning of mission. As disciples of Jesus, what are we “sent” to do, and where are we sent? Why be a missionary? The answers lie in the life of Jesus. When Jesus celebrated the Last Supper, he left his disciples with a command, “Do this in memory of me” (1 Corinthians 11:24). We remember this every time we celebrate the Eucharist. To “do this” also means to follow Jesus in giving our lives—our time, our work, our love—to our sisters and brothers. In his ministry, Jesus initially spoke only to his own people, seeking out “the lost sheep of Israel.” Eventually he encountered others, such as the Samaritan woman and other “foreigners” who were hungry for God’s love.

The mission of following Jesus today is the same as that commanded by him at the Last Supper. We have usually understood missionary life in a geographic sense, such as going to Brazil or to China or to Malawi. However mission is also sociographic. We are called to be present in society, especially among the poor and the marginalized, in every corner of the world. In Brazil, the Makushi indigenous are among those on the margin of society. In war-torn Syria, there is need for people to speak of peace in a land of violence. Here in Canada, where we are a microcosm of the Earth’s diverse cultures, we see the need for dialogue and understanding among peoples.

Let us be open to new ways of understanding the mission of Jesus. Let us follow him more closely as disciples. Let us do this in memory of Him.∞ 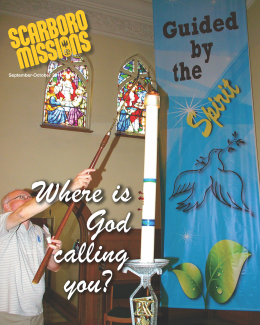