The official opening of the Monsignor John Mary Fraser Centre for Practical Theology at Regis College, the Jesuit school of theology at the University of Toronto, took place on February 13, 2019. 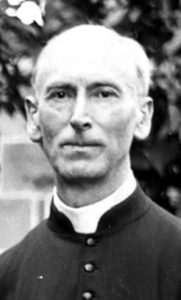 Made possible through an endowment from Scarboro Missions, and named after the Society’s founder, the Fraser Centre’s activities will provide opportunities for faculty, students, academic and community partners, and the wider public to enter into deep dialogue about the impact of faith in society today.

Father Jack Lynch, Superior General of Scarboro Missions, was invited to speak at the opening and expressed the Society’s appreciation for this association with Regis. Fr. Lynch also read the Scarboro Missions Interfaith Statement. In attendance were more than 100 participants from religious orders, laity of different Christian traditions, and professors and students from University of Toronto campuses.

The evening’s Master of Ceremonies and first director of the Fraser Centre, Héctor Acero Ferrer, had been a member of the Scarboro Missions interfaith team while studying at Regis.

In addition to the Msgr. Fraser Centre, Scarboro Missions has also chosen to endow a chair in Interreligious Dialogue at Regis. Dr. Michael Stoeber, professor of Spirituality and Philosophy of Religion at Regis, is the first holder of the chair for a three-year term.  At the opening of the Fraser Centre, Dr. Stoeber presented the inaugural Scarboro Missions Lecture in Interreligious Dialogue, entitled “Lakota and Christian Interreligious Dialogue: Questions Surrounding the Life, Teachings, and Influence of Nick Black Elk.” Dr. Stoeber explored the complex interaction of Roman Catholicism and Aboriginal Spirituality in the work and legacy of Nick Black Elk, a Lakota healer, holy man and Catholic catechist (1863-1950). Participating in the lecture were respondents Jonathan Hamilton-Diabo and Dr. John Dadosky, and moderator Dr. Pamela Couture from Emmanuel College.

In a recent issue of Canadian Jesuits,Thomas Worcester, SJ, president of Regis College, said, “These new initiatives will promote scholarship and teaching on interreligious topics, and advance public discourse on religious pluralism and ecumenical, interreligious and intercultural dialogue.  In the coming years, Regis will seek funding for more endowed faculty positions, in areas such as Women and Ignatian Spirituality, Jesuits and Global Christianity, Ecology and Ethics, and Theology and the Arts. We are also keen to bring Jesuit scholars from around the world to Regis.  For example, from January to July 2019, Fr. James Hanvey, SJ, currently master at Campion Hall, Oxford, will be in residence at Regis while writing a book on theologies of creation.”