The Gospel today is well known. The parable of the father and his two sons is the longest and perhaps the most complex of all the parables of Jesus. It only appears in Luke. Its theme is forgiveness and the mercy of God.

But there is another angle to forgiveness, and that is justice. Yes, God is merciful and forgives our sins whatever they are, but how does that relate to being held responsible for our actions? In an episode of The Simpsons, Bart Simpson states that his plan is to live a life of debauchery and go for a deathbed conversion. It hardly seems fair to people who work hard their whole lives, live good moral lives, do everything right, and some sinful upstart gets the same deal in the end.

It hardly seems fair to people who work hard their whole lives, live good moral lives, do everything right, and some sinful upstart gets the same deal in the end.

In the Gospel story, the younger son takes his inheritance early, leaves home, and squanders his money. The older brother stays home and helps his father on the land, waiting patiently for his recompense. So I can understand when the older son comes home to find rejoicing and a party at the return of his brother and feels that an injustice has been done. The older son has worked hard and has never gained a reward. It’s as if the younger son is being rewarded for being bad. After all, people should be accountable for their actions. The younger son should not be rewarded for his debauchery. 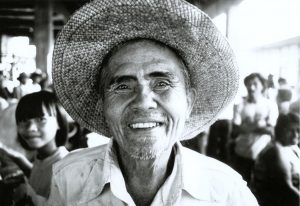 So, what should the father have done? Should he have been resentful and spiteful, turning away his younger son and abandoning him? Remember, the younger son does not ask for treatment any better than one of the father’s hired hands. He does not ask to be reinstated as a true son, nor does he ask for money, property, or status. The father reminds the older son that everything he has is his, but his brother who was lost has been found and that indeed is cause for celebration. Celebrating the brother’s return does not really hurt the older brother. All that he has earned and worked for, he still has.

If justice consists in right action, the father’s response to the return of his younger son is not unjust. It does not infringe on the older brother’s rights or freedoms in any way. It is a response of the heart given in thanksgiving. Any parent would do something similar if they had recovered a lost child.

At the beginning of the Gospel we see Jesus eating with sinners and tax collectors. This was not in keeping with the law and tradition; a person who ate with these types of people would be similarly viewed.

The Gospel story ends before we find out what happened after the father spoke with the older son. The question for us today is the same as it was for the people of Jesus’ time: Do we go in and enjoy the party or do we stay out? We are welcomed, invited, embraced, but like both the sons, God allows us to respond freely.