Mohini was born in India on October 30, 1958. In 1960, at the age of two, she moved to the   United States. She took up residence in the National Zoo in Washington, D.C. Mohini was a white Bengal tiger.

For some years, Mohini spent her days pacing back and forth in a 12-by-12-foot cage. The staff of the zoo felt sorry for her. They created a natural habitat for Mohini. It extended over several acres and contained hills, a pond, trees, and a variety of vegetation. And what did Mohini do? Mohini retreated to the corner of the enclosure. There she continued to pace back and forth hundreds of times every day, in a section which measured 12 feet by 12 feet. And so Mohini lived until she died in 1979.

We are Mohini. Life is much bigger than we think it is. We are half-alive. 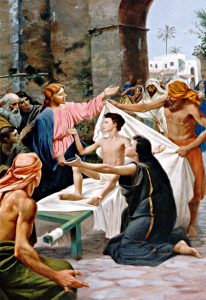 A painting of Christ raising the widow’s son. Nain Church, built by the Franciscans. Nain, Galilee

In today’s Gospel, Jesus raises the widow’s son from death to life. When I heard this story as a kid, I used to think that the story was incomplete. I wanted to hear what the young man experienced on the other side. Didn’t anybody ask him? Wasn’t anybody curious? I would have been!

We’ve all heard about “near-death experiences.” But these experiences are just that: near-death experiences. What’s it like to go beyond the point of no return? It’s too late now to ask the young man in today’s gospel. He’s dead— for the second time. At least, I haven’t heard that he is still alive. If he were still alive, I’m sure that the tourist brochures for the Holy Land would mention him. As it is, he goes down in history along with Lazarus and the daughter of Jairus as people who died twice.

If Jesus could raise the widow’s son from the dead, then why didn’t He keep him alive? The answer is that Jesus hasn’t come to add years to our life; he has come to add life to our years. He is more concerned about the living dead than He is about the dead dead.

We are the living dead—half-alive but also half-dead. We are unconscious. And North American culture keeps us unconscious.

Jesus has come to set our desires free. We are half-alive and Jesus has come to raise us from the dead. If Jesus can raise the dead to life, what can He not do for the half-dead? We’re not dead yet; we’re just having a near-death experience.