All these Scripture readings are about a call. They are to different people, in different circumstances, and of different social and religious status. They occur in different years and are all initiated by God. Dominican religious Barbara Reid reminds us that it can happen anywhere, at any time, to anyone: “For Isaiah it was during a religious service in the temple, wrapped in incense and awe-inspiring ritual.” For the Galilean fishermen, Peter, James, and John, it was when they were going about their ordinary tasks. With Paul it was when he was in an angry turmoil, intent on keeping the Jesus-followers from ruining his Jewish ancestry.

Often when we experience a call from God we are confronted with God’s goodness and mercy and our own inadequacies and sinfulness. Such were the experiences of the ones called in today’s readings. Isaiah exclaimed, “Woe is me! I am lost, for I am a man of unclean lips.” Peter implores God, “Go away from me, Lord, for I am a sinful man!” Paul exclaims, “For I am the least of the apostles, unfit to be called an apostle!”

We must recall that the mission of God is never dependent upon our worthiness. If we keep focusing on our own inabilities, weaknesses, and shortcomings, we would do little to contribute to God’s mission.

We must recall that the mission of God is never dependent upon our worthiness. If we keep focusing on our own inabilities, weaknesses, and shortcomings, we would do little to contribute to God’s mission.

Jesuit Father Scott Lewis reminds us that Isaiah’s concern about his unclean lips, meaning one’s sinful attitudes, thoughts, and moral state, is swept away by the action of the seraph. The symbolism of the burning coal touched to the prophet’s lips signifies the initiative of God in making us whole and washing away our sin. Isaiah accepts the forgiveness of God when it is offered, which then frees him to respond to God’s challenge. Redemptorist Denis McBride points out that Isaiah is no longer preoccupied with his own unworthiness. God’s forgiveness has released him for mission so that he can offer himself: “Here am I; send me.” 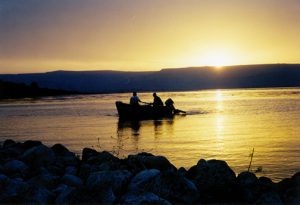 In the same way, when Jesus tells Peter to put down his nets in deep water, Peter lets go of his pride to allow a carpenter to give him advice about fishing. He abandons his certainty that nothing can be caught and overcomes his fear of what Jesus is asking of him. Only then can he let God’s grace prepare him to bring all of his skills to God’s mission.

Paul accepts that it is by the grace of God that he has turned his life around. God’s grace has made him one who faithfully carries on his ministry of preaching the Good News. In the reading, Paul proclaims Christ’s death and resurrection, giving us one of the first creeds in the Church.

The Australian religious Verna Holyhead observed that Isaiah, Paul, and Peter all confess their sinfulness and weakness and in so doing empty themselves of power and control. As a result, there is room for God to enter into the depths of their being and ours.

In the Gospel, Jesus commandeers Peter’s boat so that he can continue to teach the crowds at some distance from the shore. Peter and his companions are not part of the crowd; rather they are attending to their nets after an unprofitable night’s fishing. However they were interrupted in their work and Jesus calls them into new depths to become catchers of people.

Holyhead goes on to point out that this will mean dispossession of their business and boats, and of their very identity as ordinary fishermen. Dispossession is an important theme in Luke’s Gospel and the first disciples that Jesus called were those who had to leave something behind.

The call of the women disciples, Mary Magdalene, Joanna, Susanna, and their companions mentioned in Luke 8, is not preserved in the New Testament. Yet, Barbara Reid says that we can easily speculate about the ways in which they had to reorient their lives as they channelled money and other resources to the Jesus movement. We can speculate that their spouses, family, and friends questioned them about their priorities and gifts to the Christian mission. These obstacles were no match for the power of God’s grace working in and through them.

Saint John Paul II in his apostolic letter for the new millennium entitled Duc in Altum (“Put out into the deep”) invites all baptized to be bold, creative, and unafraid. Our own humanity will become the channel and instrument of God’s power and grace. We must always recall that the will of God will never lead us to where the grace of God cannot sustain us.