In 2006, I spent six weeks in Cairo. One day I went to Khan el-Khalili, the most famous bazaar in Egypt, where you can buy exotic perfumes and spices, beautiful jewellery, and expensive fabrics. When I arrived at Khan el-Khalili, a young man approached me and asked in perfect English, “What are you looking for?”

“Nothing,” I answered. “I just came to look around.”

And then he said, “You don’t know what you’re looking for, but we have what you need!”

There is no shortage of people in the world who will tell us what we need.

There is no shortage of people in the world who will tell us what we need. Advertisers do it all the time. They arouse our desire for something and then try to convince us that we need what we desire. Think of how much time goes into the production of a 30-second commercial. Think of all the people who are involved—the producers, the actors, the photographers, the graphic designers, the sound artists, and, most importantly, the psychologists.

Advertising uses the art of psychology to appeal to the emotions and create desire for a particular product by associating it with glamour, sex appeal, freedom, youth, a particular self-image, fun times with other people, or the good life. Whatever the association, it’s always there. And it’s all unconscious. We are being manipulated.

Advertisers manipulate us. So do politicians. Our political leaders engage the services of public relations experts and spin doctors who appeal to basic emotions like greed and fear. In August of 1945, Great Britain, France, the Soviet Union, and the United States created a tribunal in the German city of Nuremberg to try the surviving military and civilian leaders of the Nazi regime. Gustave Mark Gilbert (1911-1977) was the prison psychologist. He interviewed the top Nazi war criminals and published his interviews in a book entitled Nuremberg Diary. Here’s an excerpt from his interview with Hermann Goering on April 18, 1946:

“Of course the people don’t want war…But after all, it is the leaders of the country who determine the policy, and it is always a simple matter to drag the people along, whether it is a democracy, or a fascist dictatorship, or a parliament, or a communist dictatorship…Voice or no voice, the people can always be brought to the bidding of the leaders. That is easy. All you have to do is tell them they are being attacked, and denounce the pacifists for lack of patriotism and exposing the country to greater danger.” 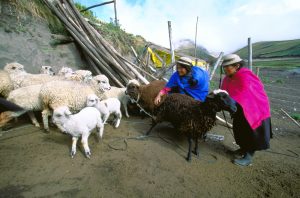 Teenagers are especially sensitive to what their peers are doing and what their peers are wearing. But it’s not only teenagers who tend to conform. Truth to tell, we are all followers. “Follow the leader” is not just a game that kids play. We are hard-wired to look for a leader. The only question is “Who are we going to follow?” As Connie Francis sings, “Yes, everybody’s somebody’s fool…And there are no exceptions to the rule.”

Everybody’s somebody’s fool. Whose fool are you? As St. Paul says, “We are fools for Christ.” (I Corinthians 4:10).