A reflection by Paige Souter on the Fifth Sunday of Lent Gospel reading: John 8:1-11

“Jesus bent down and began to write on the ground with his finger. But when they continued asking him, he straightened up and said to them, ‘Let the one among you who is without sin be the first to throw a stone at her.’ And again he bent down and wrote on the ground.” (John 8:6-8)

This Fifth Sunday of Lent we hear the story of the adulterous woman who is brought before Jesus. In the story, the scribes and Pharisees challenge Jesus to respond to the law. They demand that the woman be stoned to death. But Jesus surprises everyone—the village men, the woman, and us, the reader. Rather than convey scorn and condemnation towards the woman, or ridicule and frustration towards the men, Jesus shows the patient, tender, and merciful face of God. He not only shows mercy to the woman, he leads the men to be merciful as well.

“We can have the mercy of God whenever we want it, by being merciful to others…” (Thomas Merton)

In his book, No Man is an Island, Thomas Merton explains: “We can have the mercy of God whenever we want it, by being merciful to others: for it is God’s mercy that acts on them, through us, when He leads us to treat them as He is treating us.” (211) In the biblical story, Jesus shows the village men what it means to be merciful by being merciful to them first.

Jesus could have chosen to respond to the demanding and angry crowd with shouting and harsh words of rebuke. He could have chosen to look down on the crowd by standing on a rock or on higher ground thereby speaking from a physical position of authority. But Jesus surprises us and responds with patience and gentleness. Rather than speak from a position of power, he chooses to bend down and doodle, listening to the crowd as they continue to demand an answer from him. Sensing the right moment, Jesus stands and the crowd quiets down to listen to him. With compassion, Jesus says: “Let the one among you who is without sin be the first to throw a stone at her.” (John 8:7) 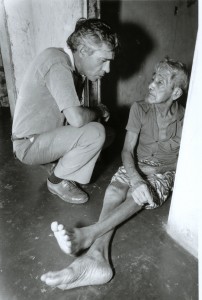 Scarboro missioner Bishop George Marskell served among the poor and marginalized in the Amazon for more than 30 years.

Through a seemingly simple change in demeanor, Jesus shows us that patience and gentleness are foundational aspects of mercy. He bends down again and patiently waits for the men of the village to ponder his invitation. He allows them time to understand the depth of his invitation, which is to choose to be merciful. After each person has departed without casting a stone, Jesus forgives the woman and showers her with his mercy: “Neither do I condemn you. Go, and from now on do not sin again.”

As we continue to prepare our hearts this Lenten season, seeking God’s mercy, may we learn to be patient bearers of God’s mercy in the world.

Paige Souter was the Education Program Coordinator for Scarboro Missions’ Department of Justice, Peace, and the Integrity of Creation. The program provided workshops, retreats, devotionals, and mini-missions for parishes and schools, and for other organizations. It was an opportunity to learn about Laudato Si, Catholic Social Teaching, ecological justice, climate change, and an option for the poor in an interactive and faith-filled format.