As of June 15, the death toll from last Sunday’s shooting in Orlando, Florida, stands at 49. Fifty-three people are wounded, some of them seriously.

Meanwhile, the civil war continues in Syria. According to some estimates, more than 400,000 people have lost their lives since the conflict began five years ago. Hundreds of thousands have been displaced from their homes.

Walter Wink, the American Bible scholar, calls it “The Myth of Redemptive Violence.”

We all know The Myth of Redemptive Violence. It’s the theme of many movies and     television dramas. Think of Johnny Wayne, Clint Eastwood, Charles Bronson, or Arnold Schwarzenegger. They play the part of the good guys who are oppressed by the bad guys. At first the bad guys have the upper hand. But then the good guys decide to fight fire with fire. They resort to violence and eliminate the bad guys. Good triumphs over evil and balance is restored to the world.

From a very young age we are exposed to The Myth of Redemptive Violence. It’s the theme of children’s cartoons. Have you ever noticed how violent cartoons are?

One of the best movies I have ever seen is the movie entitled Gandhi. It’s the story of Mahatma Gandhi, the man who led India to freedom from British rule in 1947. Mahatma means “great soul” and Mahatma Gandhi was an extraordinary man. 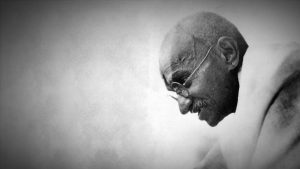 What was extraordinary about Gandhi was that he rejected violence as a means for India to gain its independence from the British. He himself suffered beatings and imprisonment, but Gandhi encouraged his followers in the way of nonviolence. Gandhi believed in what he called satyagraha, “the power of Truth.” For Gandhi, the truth was that men and women were meant to be free. Gandhi maintained that our desire to be free was an irresistible force. He believed that Truth was on the side of the Indian people in their struggle for freedom. History vindicated Gandhi. The British recognized the inevitable and granted India its independence in 1947.

Mahatma Gandhi continues to inspire men and women who struggle against injustice and oppression. He inspired Martin Luther King who led the struggle for civil rights in the United States in the 1960s.

In today’s gospel, Jesus commits himself to the way of nonviolence: “The Son of Man must undergo great suffering and be rejected by the elders, chief priests, and scribes, and be killed, and on the third day be raised” (Luke 9.22).

God’s way of dealing with violence is not our way. We deal with violence by counter-violence. God deals with violence by absorbing it and transforming it into compassion. The Lord says, “And I will pour out a spirit of compassion and supplication on the house of David and the inhabitants of Jerusalem, so that, when they look on the one whom they have pierced, they shall mourn for him, as one mourns for an only-begotten son, and weep bitterly over him, as one weeps over a firstborn” (Zechariah 12.10).

Jesus takes up the Cross and invites us to follow Him.

The Myth of Redemptive Violence is still the most popular story in town. But as Christians we proclaim “The Story of Redemptive Nonviolence.” By dying and rising, Jesus has proven God to be right and the world to be wrong.

Which story do we believe? Who is Jesus for us?